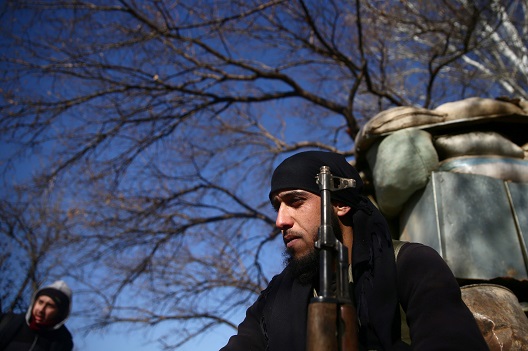 A history of grudges and slow, back and forth battles between opposition groups in Ghouta shows little hope of being resolved, even as the regime and its allies bear down on Ghouta. A new round of fighting erupted between rebel factions on 28 April, 2017. Jaysh al-Islam launched a major offensive on Hayat Tahrir al-Sham (HTS), formerly the Nusra Front, base in the town of Arbin before moving on to Bayt Siwa, al-Ashari, and Bait Naim. These constitute HTS’s most important strongholds in Eastern Ghouta. The attack came after Jaysh al-Islam claimed HTS had captured a group of its fighters in Arbin as they headed to Qaboun, which can only be reached by tunnels.

Jaysh al-Islam managed to capture most of the key HTS bases in the first hours of the offensive and took control of several more towns. HTS announced that two of its Jordanian commanders were killed and it was forced to withdraw towards areas controlled by Faylaq al-Rahman, from where it launched a counter attack on Arbin and Hazzah. Jaysh al-Islam then withdrew from Hazzah following a joint attack by Faylaq al-Rahman and what remained of the HTS forces, but Jaysh al-Islam continued to storm what is known as the “Middle Sector” (a section of Ghouta), saying its goal was to completely destroy HTS and capture its leaders, not to attack Faylaq al-Rahman. The latter was not convinced. It accused Jaysh al-Islam of seizing several of its bases on the pretext of attacking HTS. Ahrar al-Sham and other, smaller factions in the area announced they would remain neutral.

The current fighting is the most serious yet between Jaysh al-Islam and Faylaq al-Rahman. The former took over several of the latter’s bases. But the two announced that they had agreed not to attack each other and hoped to reach an agreement. Jaysh al-Islam argued it had responded to fire from HTS fighters, and accused Faylaq al-Rahman of protecting HTS fighters as they retreated. Faylaq al-Rahman said the offensive against its bases was deliberate, even if the HTS presence offered a pretext, and fears that Jaysh al-Islam will return to the Middle Sector due to the history of conflicts between the two. Religious notables and local parties are making efforts to bring about a reconciliation deal.

Jaysh al-Islam decided to attack Jabhat al-Nusra on the first anniversary of a major offensive against it that Jaysh al-Fustat, a coalition dominated by HTS / Nusra and Faylaq al-Rahman. That attack broke Jaysh al-Islam’s domination of Eastern Ghouta and contributed to its loss to the regime of large parts of southern Ghouta as well as a string of other defeats. On the ground, the result of the infighting was the division of Eastern Ghouta into two separate areas: Douma, controlled by Jaysh al-Islam, and the Middle Sector, which constitutes the core of Ghouta and is controlled by Faylaq al-Rahman and other factions such as Ahrar al-Sham and HTS—as well as Harasta, the stronghold of the Fajr al-Ummah faction, formerly part of the Jaysh al-Fustat coalition, but remained neutral in recent battles.

In order to understand the current battle and the concerns of each player, it is necessary to understand their social and ideological backgrounds and the accumulated sensitivities between them.

Jaysh al-Islam started as a group called Siriyat al-Islam, which later became “Liwa al-Islam” (the Battalion of Islam), and finally Jaysh al-Islam (the Army of Islam) on September 30, 2013. The group is notable for its coherent military structure as compared to less organized units in the Free Syrian Army. It is built around a solid nucleus of local fighters from Douma, the largest town in the Eastern Ghouta, and follows a doctrine of “intellectual Salafism” that is at odds with the religious authorities in Damascus, which follow a mix of Shafii, Ashaari, and Sufi teachings. Jaysh al-Islam’s doctrine is also fiercely hostile towards Salafist Jihadism, meaning its relations with Nusra / HTS have been tense since the two groups emerged, to the point of open condemnation. Since 2012, the Mufti of Jaysh al-Islam, Abu Abdrulrahman Kaakah, has described Nusra as “Khawarij,” those who have gone out referencing a group that in 657 AD “left” mainstream Islam and held radical views, a term many Islamic scholars also use to describe the Islamic State to reflect its extremism.

Faylaq al-Rahman, led by Captain Abdulnaser Shamir, formed in 2013 during a meeting of several local, non-ideological factions of the Free Syrian Army in Eastern Ghouta, most prominently Liwa al-Baraa. An important development was when the group was joined by the “Islamic Union of the Soldiers of the Levant,” a group seen as the intellectual opposite of Jaysh al-Islam as it follows the Damascus religious authorities and is influenced by the ideology of the Muslim Brotherhood. Faylaq al-Rahman turned into the second most powerful armed group in the Eastern Ghouta and receives support from the Military Operations Center (MOC) in Jordan. It represents a social order and intellectual school that opposes the doctrines of Jaysh al-Islam (although it is also hostile towards Salafist Jihadism). But it was hit by a series of defections—most significantly, that of Alwiyat al-Majd, in Hamouriyah—after it allied with Jaysh al-Fustat to attack Jaysh al-Islam last year.

Hayat Tahrir al-Sham / Nusra Front is the local faction led by Abu Assim. Nusra / HTS has not been able to recruit large numbers from Eastern Ghouta residents, and its numbers have been limited to a few hundred fighters despite its vast financial resources thanks to tunnels and workshops it controls in Arbin. Most of its leaders are Jordanian jihadists who follow the jihadist preachers Abu Mohammad al-Maqdisi and Abu Qatada al-Filistini.

Fajr al-Ummah is a local, non-ideological group from Harasta that has worked with Jabhat al-Nusra within Jaysh al-Fustat, but stayed neutral in recent clashes.

Harikat Ahrar al-Sham al-Islamiyah (or simply Ahrar al-Sham) has several hundred fighters in Eastern Ghouta and despite long-standing sensitivities towards Jaysh al-Islam and the sympathies of some of its fighters towards Nusra / HTS, the local branch of the group stayed neutral in the recent clashes.

The struggle for influence and personal sensitivities played a major role in deepening the divisions between factions in Eastern Ghouta, along with regional and ideological factors and various political and regional ties.

There may be a political explanation for the timing of the fighting between Jaysh al-Islam and HTS. It comes despite an intensified regime campaign against Ghouta and eastern districts of Damascus such as Qaboun, Barzeh, and Tishrin, on the pretext of fighting terrorism. There is also the possibility that the fighting factions can reach an agreement for Eastern Ghouta. But the main reason for the latest clashes is the enmity and the history of fighting between HTS fighters and other jihadists on the one side, and Jaysh al-Islam and various FSA units on the other—on top of the long-running rivalry between Jaysh al-Islam and Faylaq al-Rahman.

But if Jaysh al-Islam and other local factions delay resolving the issue of HTS or reaching an agreement with Faylaq al-Rahman, that could lead to an escalation in Eastern Ghouta and a war of attrition. Pro-regime forces could exploit that to seize new parts of the region or attempt to crush rebel forces there, as happened in eastern Aleppo after Jabhat al-Nusra and the Zenki movement attacked the Fastaqim Kama Umirt base in November 2016.