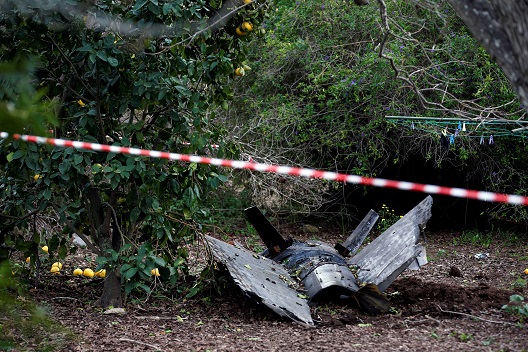 Photo: Fragments of a Syrian anti-aircraft missile found in Alonei Abba, about 2 miles (3.2 km) from where the remains of a crashed F-16 Israeli war plane were found, at the village of Alonei Abba, Israel February 10, 2018. REUTERS/Ronen Zvulun TPX IMAGES OF THE DAY

On February 7, Syrian state television released a statement from the Syrian armed forces regarding Israeli rocket shelling on regime-held positions in the country’s South. Then, on February 10, the Israeli army tracked an unmanned Iranian aircraft coming out of Syria toward Israeli airspace. Israel dispatched an Apache helicopter to shoot down the aircraft. In response, Israel launched a military attack, bombing Iranian positions stationed at the T-4 military airport in central Syria, from which the unmanned aircraft originated. Syrian air defenses engaged the Israeli strike force and downed the Israeli F-16. In retaliation, Israel launched an intensive string of airstrikes, bombing 12 targets deep inside Syria, including three air defense batteries and four Iranian targets in the vicinity of the capital, Damascus.

According to activists on the ground, a number of military areas were targeted. The T-4 airport in the Homs countryside (50 km east of Palmyra) was disabled after its traffic control tower was destroyed. As the most important and largest Syrian military airport, T-4 contains 54 concrete barriers, a primary and two secondary runways, and stores a number of the Syrian Air Force’s advanced aircraft (including Su-24s, Mig-29s, and Mig-27s). The airport is lined with sophisticated Pechora type surface-to-air missile systems, low-frequency radar, military vehicles, and T-82 tanks. The base represents a critical strategic staging ground for Bashar al-Assad’s forces and his allies, while also serving as a site from which it can launch close air support operations for the Syrian army, currently fighting in Deir al-Zour, Hama, and Aleppo.

Israeli Prime Minister Benjamin Netanyahu recently held a meeting with Russian President Vladimir Putin on January 29 to discuss the growing threat along the Israel-Syria border. Russia has maintained an air base on the Syrian coast, providing air support and ground support to Assad regime forces in its war against Syrian opposition groups. “Israel will not allow Iran to barricade itself in both Syria and Lebanon and convert them into precision missile factories,” said Netanyahu.

Many analysts believe that a clash between Tel Aviv and Tehran might occur in 2018 due to Iran’s successful expansion in the region, especially considering their land route connecting Tehran to the Mediterranean through its militias in Iraq, Syria, and Lebanon. Israel sees this expansion as an existential threat, particularly as Tehran changes the rules of engagement. This could occur through a possibly preplanned incident designed only to provoke, but not trigger, an all-out war. Israel so far has attempted to exercise restraint and abstained from issuing direct threats. Israel requested that Putin demand all parties involved in the conflict to exercise restraint and avoid escalation. They also requested that he reach out to Tehran with a message that amounts to “we are here.”

Considering this tense atmosphere, all parties will need to approach the situation with caution. Iran wants to protect its influence in Syria, but finds it difficult considering heightened discontent with Russia and Turkey, which consider Iran an undesirable spoiler to a potential political solution. Iran’s attempt to lure Israel into the conflict would produce a new enemy, justifying its continued presence and entrenchment in the Syrian theater. It would also shift the looming war from Iran to Syria’s southern border with Israel. Furthermore, it sends a message to Assad, saying that its naval and air presence in Syria will protect him. It also accommodates Moscow’s interests, as it sends an indirect message to the Trump administration that Russia will not relinquish its role of a superpower capable of managing the opposing allies in Syria—from Turkey, Iran, the Syrian regime, and Kurdish forces, to Israel. This would force the United States to sit at the Russian table to negotiate agreements and compromises that will ensure Israel’s security.

While some reports minimize the importance of the current development, Israel’s intent to strike any Iranian or Hezbollah presence in Syria remains a source of fear and anticipation. The situation necessitates swift action by Israel to bolster its security. First, Israel must diminish Iranian influence in the region, and second by creating a buffer zone along the southern Syrian border, free of Iranian militias.