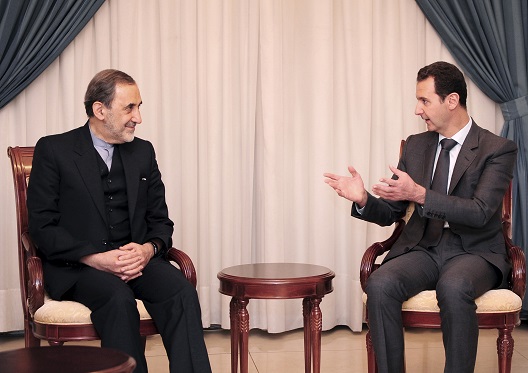 The short answer is “No.” A family and an entourage that placed itself at the disposal of Iran while burning much of Syria to the ground will not prevail, provided the United States and its partners begin to push back. Yet termites are at work, and the fulfillment of this proviso is far from certain.The Trump administration, unlike its predecessor, claims to oppose Iran’s domination of what is left of the Syrian state. Unlike his predecessor, US President Donald Trump did not hesitate to strike militarily when Bashar al-Assad, supported by Iran and Russia, twice assaulted defenseless civilians with sarin nerve agent. When Russian “military contractors” sought, in February of this year, to cross the Euphrates River to attack American-held positions, there was no ignominious retreat. On the contrary, the Kremlin learned a hard lesson about testing American resolve east of the Euphrates de-confliction line. Iranian-led Shia militias and regime military units have been similarly educated.

President Trump has verbalized his contempt for Syrian President Bashar al-Assad, a person whose criminal portfolio alone should give pause to those in government who would try to persuade Mr. Trump that Assad is a potential partner for the United States in the battle against Sunni Islamist extremism. This is a battle in which Assad’s civilian-centric brutality has aided and comforted Sunni extremists around the world, providing the grist for an Islamist recruitment mill. As the American-led coalition fought ISIS in Syria, Assad, Iran, and Russia were mainly AWOL, focusing their firepower instead on Syrian civilians opposing Assad, his external enablers, and al-Qaeda. President Trump has made it clear that Iranian domination of what is left of the Syrian state is antithetical to American security interests.

And yet elements of the Obama administration’s passivity in the face of Iran’s presence in Syria remain. When the leaders of Israel and Jordan—apparently seduced by the empty promises of Russian President Vladimir Putin—agreed to watch Russia and the regime overrun a de-escalation zone agreed to by President Trump in 2017, a sizeable force of anti-Iranian Syrian rebels was thoroughly betrayed. The American reaction was one of silence, suggesting to some observers the possibility of complicity. Moreover, there are persistent reports of administration figures encouraging the Kurdish People’s Protection Units (YPG) to make a deal with Assad: something that would spring the trap door under the post-ISIS (ISIL, Daesh, Islamic State) stabilization of northeastern Syria, converting nearly four years of American military effort in Syria into a concierge service for the Iranian-led militiamen forming the core of Assad’s ground forces.

This administration should decide what it wants of Syria and build a strategy to get it. The Obama administration, relentlessly focused as it was on an Iran nuclear deal, feared alienating Tehran in Syria to the point that Iran might withdraw from nuclear talks. This fear explains why President Obama reportedly assured Iran’s Supreme Leader in writing that Tehran’s man in Damascus—Assad—would not be targeted by American forces going after ISIS. Obviously, the Trump administration feels no such constraints. Still, apathy, defeatism, and indifference bubble up from below, making it seem at times as if important elements of the Obama administration remain firmly in place.

The view here is that the United States must sustain the long-term objective of full political transition within a united Syria independent of Iran. A strategy for achieving this objective need not involve any of the things Barack Obama falsely accused his critics of wanting: invasion, occupation, and other forms of violent regime change. A workable strategy would instead center on two things: permitting an alternative to the pro-Iranian Assad to grow in a protected northeastern Syria liberated from ISIS; and protecting Syrian civilians from Assad regime mass murder inflicted by chemicals and other instruments of state terror.

Yet any discussion of objectives and strategy must start with a clear understanding of why any of this matters to the United States. Pro-regime elements in Washington and elsewhere try to make hay on this point. Their message to Donald Trump is (a) Assad has won, so don’t waste time, effort, and resources on Syria, (b) Assad’s supposed victory poses no challenge to American security, and (c) Assad might actually prove to be an asset in the battle against Islamist extremism of the Sunni variety.

The message here is that Syria matters profoundly to the interests of the United States and its allies in the region and beyond. Israel’s Netanyahu and Jordan’s Abdullah will find, in the fullness of time, that their reliance on Moscow to neutralize Tehran in Syria was misplaced; an unforced error worthy of the Obama administration. But even if Washington cared nothing about Israeli and Jordanian security, the persistence of an Assad regime subordinated to Iran and to Lebanon’s Hezbollah should be profoundly troubling, given the destabilizing agenda of Iran-based Shia Islamist extremism. Even if Russian attempts to blackmail the West into subsidizing a crime family succeed, Syria “ruled” by the corruptly brutal Assads will hemorrhage human beings and host extremist Islamists (Shi’a and Sunni) for as far as the eye can see.

Many of the consequences of a continued Iran-Assad domination of in Syria will fall on American allies and friends. But North America may not be exempt from violent reactions inspired by the Nazi-like practices of a systematically repressive regime, one whose bookkeeping practices in its torture chambers Hitler’s accountants would have found admirable. And Iran (often through Hezbollah) has long-since demonstrated its terror reach into this hemisphere.

Those American officials who counsel cooperation with Assad on counter-terrorism matters might consider the regime’s record, along with that of Iran. They might also take a look in the mirror. Tales spun about Assad’s alleged desire to be free of Tehran, and Russia’s alleged willingness and ability to make it happen, are made in Moscow and devoid of fact. Yet they seem to have worked in Jerusalem and Amman, while also persuading a credulous few in Washington. Whatever the innermost desires of Bashar al-Assad, he is utterly dependent on Iran for the foreseeable future.

This administration has drawn a line on Iran’s destabilization of the Middle East. Even as it opposes Islamist extremism of the Sunni variety—ISIS and al-Qaeda—it recognizes that the Shia variety—Iran and Hezbollah, supported by Assad—is just as destructive and has enjoyed far more success than its Sunni counterparts: there is, after all, overt state sponsorship and support. Yet this line will be as meaningless as an Obama redline if Syria is just conceded in perpetuity to Assad.

Declining to accept the inevitability of perpetual Assad rule in Syria need not be a costly endeavor for American taxpayers. But neither will it be cost-free. With allies and partners organized to do heavy lifting, American leadership can permit Syrians to create an attractive, credible alternative to Assad in a prosperous northeast rich in petroleum and agriculture. By warning the Russians and working with Turkey, Assad can be deterred from mass homicide in Syria’s northwest. If resisting Iranian expansionism and extremist-abetting mass murder is more than just a rhetorical relic of bygone administrations, the United States will work to defeat the conclusion that Syria has been lost to Iran.

Ambassador Frederic C. Hof is former special adviser to the secretary of state for transition in Syria and current nonresident senior fellow with the Rafik Hariri Center for the Middle East. He also is currently is a faculty member at Bard Colleges.