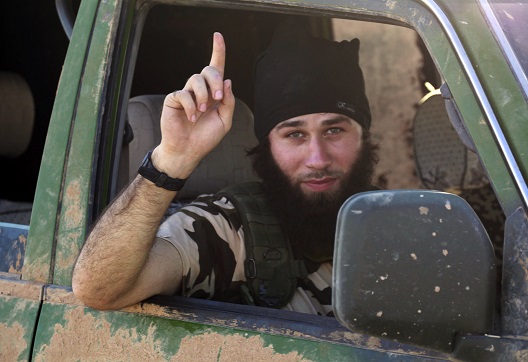 “Ali” is a former Islamic State (ISIS or ISIL) fighter. Before joining ISIS, he was a university student known among his friends for his kindness and friendliness. His joining has bewildered his friends, especially since ISIS killed a close relative of his. His uncle said of him, “I was responsible for raising Ali. I know him well, he has a good heart and would never even harm a cat. I was shocked to hear he had joined [ISIS]. Ali would never take on that extremist thought and he doesn’t need money. However, the brainwashing and the violations that the Kurdish militias committed against the Arabs were major reasons for his joining.”
ISIS has successfully built a strong local support base in Raqqa by exploiting local dynamics, in particular the local sectarian framing of the Syrian civil war, the instability and political vacuum, old Arab-Kurdish feuds, and religious education. This dynamic has hindered local and international efforts to topple the self-styled Caliphate’s capital. Uprooting ISIS from Raqqa and deterring locals from joining them needs more than just a military solution, but one that understands ISIS’s success and helps the people in Raqqa find an alternative that meets their needs.

Since its inception, ISIS has exploited the Shia-Sunni conflict. The Assad regime, predominantly composed of Alawite Shia, framed the Syrian revolution along sectarian lines. Although this position encouraged many Hezbollah and Iranian fighters to join the Assad regime, it allowed ISIS to appear as the Sunni champion providing refuge from the sectarian killing. They gained legitimacy through public sympathy by defending Sunni Islam in the streets of Syria. Thus, many fighters joined ISIS for fame and fortune and civilians supported it for protection from the injustices of sectarianism, forced migration, and daily killing.

ISIS built on the conflict’s sectarian character and manipulating everyday Syrian religiosity to root itself further. It indoctrinated the populace with spirited songs and anthems and organized festivals for women and children to spread its ideology. Syria’s rural eastern population (including Raqqa, Deir Ezzor, and Hasaka) suffers from limited exposure to formal religious teachings, making them easy prey to any form of proselytizing. This vulnerability aided ISIS in convincing the locals that adherence to their teachings was the only path to salvation and paradise. The ISIS education system rejects tolerance and coexistence with other religions and sects and strengthens the conflict’s sectarianism.

The ineffectiveness of the Syrian opposition’s national coalition and temporary government contributed to draining popular support for the revolution in cities such as Raqqa and Deir Ezzor. Local residents even felt their cities were marginalized and denied military and humanitarian aid. The lack of support placed these populations squarely at the mercy of either the Syrian regime or ISIS.

One could also attribute Syrian support for ISIS to the fragmentation of fighting forces in the conflict. When the armed Syrian opposition failed to provide daily security and stability in rebel-held areas, ISIS emerged as a plausible alternative. In the areas it seizes from other military factions, ISIS revives institutions and provides services that had collapsed, in effect utilizing these basic services to gain popularity. Thus, the Syrian people find themselves seeking refuge with an extremist group because it represents the lesser of two evils—the only opposition group that controls territory not constantly bombarded by barrel bombs.

Due to this relative stability, ISIS can establish a strong foundation of popular support within its geographical boundaries based on reviving civilian institutions, trade, and strict laws. Through local governance, ISIS provides the security that citizens crave and restores some semblance of economic normalcy, aided by large amounts of oil revenue generated from territories it controls in Syria and Iraq. According to a trader known as Abu Ahmad, “Trade vehicles travel from Raqqa to Mosul, every day and night, without anyone opposing them. We pay alms and taxes that ISIS requires of us. This is the only solution to live our lives.” ISIS also invests in agriculture, maintaining a special office to oversee irrigation and crop harvests. It also established the Office of Islamic Services to oversee public hygiene, electricity, and water systems. It even provides traffic police in the cities and implements a strict set of traffic rules. Lastly, it created the Islamic Police to regulate public interaction, according to the rulings of the Islamic Court.

ISIS more recently announced formal deals with a number of Arab tribes within its areas of control, regulating its relations with these tribes through the Office of the Tribes. The Syrian regime’s seizure and redistribution of tribal lands from the Kurds to the Arabs in the 1980s has prompted many tribes to support ISIS to protect the lands they received. The Syrian regime confiscated lands from the Kurds and transferred ownership to the Arab tribes to prevent Kurdish control over contiguous swaths of territory, frustrating any attempts to secede based on Kurdish nationalism.

With the backing of international coalition air strikes, the Kurdish People’s Protection Units (YPG) and the Kurdistan Workers’ Party (PKK) have advanced toward the ISIS stronghold of Raqqa in July 2015. Arabs accused the Kurds of widespread displacement and human rights violations against the Arab majority. This experience convinced many Arabs that living under the control of Kurdish forces was a worse fate than supporting ISIS.

Many ISIS recruits join the group believing that it would absolve them of their sins and grant them material success. These men, accustomed to a life in poverty, are given attractive salaries. Poor families send their children to join ISIS’s ranks to spare them from starvation. Delusional and mentally ill individuals also join, seeking power and repentance from past sins. In ISIS, they all find security and power.

Syrians as a people are not inclined to terrorism; political instability, sectarianism, ethnic feuds, religious manipulation, and the global inability to address them that have left Syrians in such a crisis as to support ISIS in some areas. For Syrians to stop supporting ISIS they need more than a military situation, they need an alternative that fulfills the same basic needs that ISIS provides.

Feras Hanoush is an activist from Raqqa and a former doctor with Médecins Sans Frontières in Syria.