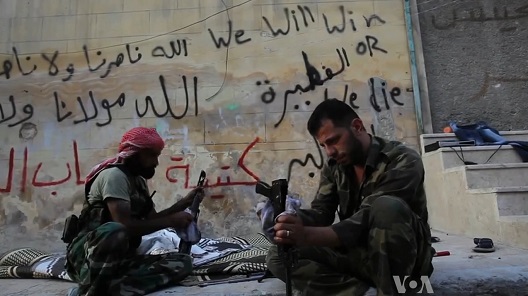 If one wishes to live safely in Deir Ezzor, he must swear allegiance to the Islamic State (ISIS). ISIS grants those who pledge their loyalty lucrative pensions and salaries, the best living accommodations, and favorable treatment, allowing said individuals to do what they want and come and go as they please—even after ISIS sealed the lone crossing to the city accessible to civilians earlier this year. The inhabitants of Deir Ezzor have rebuffed these advances and refused to pledge fealty, and so suffer harsher treatment than residents of any other ISIS-controlled area.

Control of Deir Ezzor is split between the regime and ISIS. The regime-held portion consists of city’s north and west neighborhoods. The ISIS-controlled section includes most major neighborhoods in the city itself, all of the surrounding countryside, and the al-Siyasiyah Bridge—the only remaining crossing between regime and ISIS territories.

The city’s civilians have persevered, scrupulously waiting to rid themselves of the takfiriyin (those that deems others apostates), as they derisively refer to ISIS. Despite ISIS’s extraordinarily harsh treatment and arbitrary rule, the city has yet to bend to ISIS’s will. In fact, despite being isolated and abused, only a handful of Deir Ezzor’s residents have bowed to ISIS.

Yassin, an inhabitant of one of Deir Ezzor’s ISIS-controlled neighborhoods, reports that, “ISIS arbitrarily bans many things found in all other countries of the world, including smoking, western-style dress, and certain hairstyles. It forces women to wear the niqab (full-face veil)and forbids an assortment of other ordinary behaviors that reasonable individuals would never think to outlaw. Anyone found in violation of ISIS’s dictums is severely punished, as I was in June this year when ISIS henchman on patrol detained me simply for smoking a cigarette in the alleyway behind my home. They promptly took me to the Hisbah [the religious police responsible for enforcing ISIS’s punitive interpretation of Islamic morals and laws]. There, I was sentenced to thirty lashes and three days of hard labor, where I was sent to the frontlines between ISIS and the regime to dig trenches.”

In contrast to Yassin’s story, a youth from Raqqa confirms that the sentence for smoking in ISIS’s capital is 5-10 ‘light’ lashes performed in a manner so as not to inflict pain or injury, but rather convey to the accused that he has committed a serious mistake and serve as a deterrent against similar behavior going forward.

In April of 2015, I was sitting in a barbershop waiting for my turn when a young man entered the salon with orders from an ISIS patrols at al-Siyasiyah bridge to cut off all of his hair. The Hisbah had deemed his hair too long and its layered texture un-Islamic. Upon inquiring further, I learned that the man had come from the countryside after being displaced from his home. After crossing into the city at al-Siyasah Bridge, ISIS security confiscated his identity card until he returned to the bridge with a new, appropriate haircut. I was even more surprised when the youth told me that, in the countryside, ISIS does not interfere with the residents’ grooming habits. To confirm his story, I visited the countryside, where I not only saw men with long and layered-cut hairstyles, but also tight jeans for sale in the markets—clothing considered inside the city-limits as un-Islamic, revealing dress—completely opposite from how ISIS rules the city itself.

In April of this year, my mother and father were on their way to visit relatives when ISISpatrols stopped their vehicle and seized my father’s identity card because my mother, though veiled, was not wearing black gloves as prescribed under ISIS’s policy of Islamic dress. They ordered my father to accompany my mother to the Hisbah branch the next day to pay a fine. Upon arrival, the Sharia judge forced my father to pay a fine in the amount of 7000 Syrian Pounds ($25) and sentenced my father to seven lashes, punishment carried out in front of my mother to impose upon her the seriousness of leaving the house while violating the Sharia-sanctioned dress. Several days later, I visited my relatives in al-Hisaan, a rural village to the west of Deir Ezzor. There, I noticed women were not wearing gloves, and many of them did not wear a veil as long as they stayed in their own neighborhoods.

While there, Mohammed, a member of the Free Syrian Army (FSA), told me, “When ISIS was able to defeat and dismantle the FSA in Deir Ezzor, many former FSA fighters took up arms for the Islamic State. Only a small contingent of the FSA remained to combat the regime, and even then, we took most of our weapons from ISIS. When we (the FSA fighters) decided to stop fighting, ISIS’s strength and fighting capacity on the streets quickly deteriorated, such that the city appeared likely to fall into regime hands. Compelling us to return to the fighting, ISIS tried to entice us to join their ranks and swear fealty by offering us better salaries and working hours. When we refused to do so, ISIS began a campaign of anti-FSA discrimination. They forced those of us who would not swear fealty to work 12 hour days and slashed our salary to 8,000 Syrian Pounds ($300), whereas ISIS paid fighters who swore fealty 120,000 Syrian Pounds ($400) a month, in addition to food and fuel rations.”

Marwa al-Yassir, one of the few residents yet to flee the city, has stayed in her home from the very start of the war and lived under ISIS rule for more than a year. For her, “It’s blatantly clear that ISIS arbitrarily imposes its laws and harsh penalties. I’ve seen the great people of this city suffer through over three years of war, which is only getting worse by the day. Nonetheless, we are resisting. We are resisting just by staying in our homes, defying ISIS and the regime, which mercilessly and indiscriminately bombards civilians every single day. We will keep resisting—we are the sons and daughters of this land.”

ISIS is often characterized as uniformly imposing its harsh and cruel system of governance upon all the territory that it controls. However, from discussions with civilians and my own personal observations, it is clear that the severity of ISIS’s rule varies based on the residents’ willingness to subjugate themselves and swear fealty. To date, Deir Ezzor has refused to submit to ISIS’s despotic brand of coercion and its blasphemous ideology, and has yet to bow to the cabal, hence it suffers ISIS’s harshest treatment. ISIS will mitigate its treatment of the city if the civilians acquiesced to its rule, but Deir Ezzor’s residents remain steadfast in their resistance to the so-called Islamic State despite the siege and fighting. In so doing, residents of Deir Ezzor have delivered a message to the rest of the world that they will not stand idly for ISIS’s blasphemous brand of oppression and injustice.

Fikram is a civil activist from Deir Ezzor. He worked as a paramedic on the fronts, in the media with Alwan Team, and with the human rights organization SAMA.