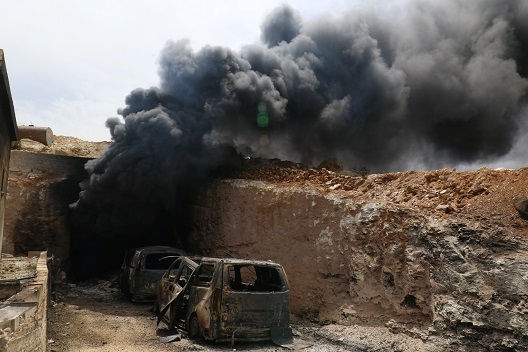 Photo: Smoke rises from an emergency service point after an airstrike at the rebel-held village of Maar Zita in Idlib province, Syria April 27, 2017. REUTERS/Ammar Abdullah

In late September, Russian jets bombed the city of Haram in Idlib province for the first time since the outbreak of the Syrian revolution in 2011. Not a single village or town in western Idlib was spared by Russian bombing this time. The air strikes hit  Haram, Idlib city, Jisr al-Shughur, Khan Sheikhun and towns in the Jabal Zawiyah region. Civil Defense members said most of the strikes targeted hospitals, schools, and any infrastructure left in the 5,000 sq. km rebel-controlled northern region.

Activist Hadi al-Abdullah said there had been more than three hundred airstrikes, destroying five hospitals and turning Jisr al-Shughur into a ghost town. Only around 10,000 of its 45,000 pre-war residents remain. Russia crowned its bombing campaign with a statement issued on the Facebook page of its Hamaymin military base, saying that moderate rebel groups were responsible for the bombing because they had allowed Hay’at Tahrir al-Sham (HTS) to maintain a presence in the area. It said the main reason for the campaign had been an attempt by HTS fighters to advance into the northern Hama countryside to capture Russian military police officers stationed there. Despite surrounding three Russian soldiers, HTS was unsuccessful, and ended up losing some 150 of its fighters.

The Russian base then responded to a message from an Idlib resident asking why civilians were being targeted because of the HTS operation. “Local residents must reject the extremist groups immediately,” it said. “The fate of the city will be no different from that of the Syrian cities controlled by the terrorist Daesh (Islamic State, ISIS, ISIL) group, as we have previously indicated. The de-escalation zones are the last chance to avoid military solutions, as long as extremist groups continue their activities in those areas.”

The wave of airstrikes has killed around 150 people, most are women and children, and triggered a mass exodus towards the border with Turkey. President Recep Tayyip Erdogan met with President Vladimir Putin during the bombing of the city of Haram which is across the border from the Turkish town of Reyhanli. Russian jets entered Turkish air space in order to carry out the raid;  Haram cannot be bombed from the air from inside Syrian airspace because of its proximity to the Turkish border. Opposition activists responded with a hashtag in Arabic, English, Russian and Turkish: “Russia is a killer, not a guarantor.”

Russia has punished the civilian population of Idlib, without targeting a single one of the groups it accuses of extremism, such as HTS, the Turkestani party, or any other group. It appears that the main aim of the wave of bombing was to prevent rebel forces launching any further operations, as regime forces are facing several challenges with massive losses due to the escalating war against the Islamic State.

In September, ISIS claimed it had killed 130 regime fighters battling to seize Deir Ezzor. Later that month, Faylaq al-Rahman also announced it had carried out operations against regime forces, leaving many dead and wounded. Given the rising number of casualties among Russian forces fighting in Syria, the Russian army has realized it cannot depend on the Syrian army, which is undermined by bribery and nepotism at every level. Asharq Al-Awsat reported in August that Russia had lost more than forty soldiers, something the Russian defense ministry denies. The Russian army’s most recent losses include the crash of a military plane, killing its pilot, near Latakia.

Given the situation in Idlib, HTS finds itself facing internal crises. It is made up of dozens of groups (the German Battalion, the Chechen Battalion, the British Battalion and Syrian groups that supported a Turkish intervention, such as the Nour el Deen al-Zenki movement, which recently quit the bloc, and the Ansar al-Sham Battalion). Many of these are against fighting the Turkish army and will likely defect in the event of a Turkish intervention. Meanwhile, HTS’s local popularity has dramatically waned because of its policies. In Maarat al-Nu’man city, there have been almost weekly demonstrations against it, while activists in Idlib have organized campaigns to take down the HTS flag and replace it with the flag of the revolution.

The situation has become increasingly complicated. Every actual or attempted military operation by opposition forces triggers a brutal barrage of Russian bombing. Moreover, the Turkish army has hesitated to enter Idlib, giving Russia the opportunity to target the area in the name of “fighting terrorism.” Turkey’s hesitation has also given HTS more time to find solutions allowing it to stay for as long as possible in the city under new guises. It has tried to hide its military bases there and is also working to set up a civil administration there as a cover for its continued control over Idlib, thus helping legitimize Russia’s bombing of populated areas on the grounds of the HTS presence there. But leaks show that HTS wants to carry out operations in the southern Aleppo countryside in a bid to confuse its many foes and please its base in Idlib, in response to Russia’s attempts to turn the population against it.

With these contradictions and Russia’s ongoing bombardment, it is pushing the people of Idlib, exhausted by war, to flee. Residents are looking for solutions that will keep them out of Russian and Syrian regime reach—something the regime will not accept. Foreign Minister Walid Muallem told the United Nations General Assembly in New York that the Syrian government insists on regaining control of the entire country and liberating it from “terrorist groups.”

While most reports no longer portray Idlib as an area controlled by jihadists, and there is no doubt that the regime will retake it, it still represents a thorn in the regime’s side. There are still activists who represent the peaceful revolution and are equally opposed to the regime and to HTS. That contradicts the regime and its allies’ claims to be “fighting terrorism.” The battles between rebels, jihadists, and government forces have exposed the weakness of the regime and its inability to fight on more than one front, forcing Russia to intervene and protect it. Idlib may fall back into regime hands, but what happens in Idlib must remind those with an interest in Syria that the war will not end with the regime in full control of Syria. It cannot, because the opposition will continue to resist it, raising the question: how can we end this war?