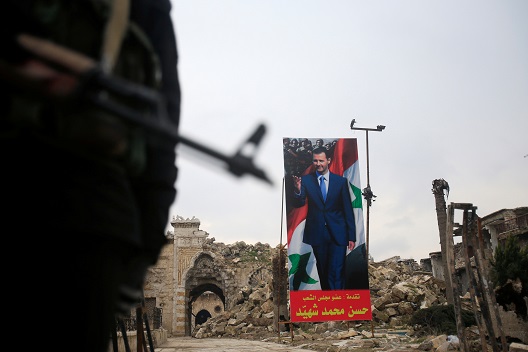 The Trump administration is focusing properly on blocking the destabilizing, terrorist-abetting activities of Iran in Mesopotamia, the Levant, and elsewhere. Yet rather than addressing the worst of those activities head-on, it is confounding allies and risking Western unity by making the 2015 nuclear deal (the Joint Comprehensive Plan of Action – JCPOA) the centerpiece of its roll-back strategy. One alternative to an all-or-nothing bet on the JCPOA would be for the administration to concentrate its attention and that of allies and partners on the one place where Tehran has stacked a major portion of its own chips: in Syria and on the regime of Bashar al-Assad.

No: this is not a call for military intervention or violent regime change. It is something quite more modest: a suggestion that the Trump administration spend quality analytical and planning time on the center of Iranian hegemonic gravity, rather than a side issue that can separate Washington from allies when it needs them most. Focus on the artery; not a capillary.

No: this is not a ringing endorsement of the JCPOA. Many discussions with senior Iranian former officials over the years persuaded this writer that Tehran’s preference was to avoid deploying nuclear weapons. No doubt Iran wanted to have the requisite resources and capabilities to go nuclear it if decided that doing so was a national security imperative. But crossing that line would spark regional proliferation, potentially turning every Iranian intervention into a nuclear crisis. “Look at what we have accomplished without nukes!” was how one Iranian interlocutor put it. How much more dangerous it would be for Tehran’s adventurism if the Persian-Arab Gulf were ringed with nuclear-armed states. Would Aleppo or Deir Ezzor be worth Tehran?

Still, the Obama administration put all its regional chips on the JCPOA. It was willing to place longstanding bilateral relationships in the region at risk and to leave Syrian civilians unprotected from Tehran’s murderous Syrian client to secure Iran’s agreement to refrain from doing that which it may not have wanted to do in any event. Yes, there is value in lengthening Iran’s nuclear “breakout” period for several years. Yes, there may be senior Iranian officials willing to hamstring the excellent adventures of General Suleimani and the Revolutionary Guards in neighboring states by going nuclear if given the chance. Yet the real significance of this agreement is that the American allies drawn into the negotiating process by the Obama administration remain totally dedicated to it.

In confronting the challenges of illegitimacy and Islamist extremism in the Middle East—challenges posed and exacerbated by the aggressive sectarianism of Iran’s governing Islamists—focusing on the JCPOA is to choose the capillary over the artery. As convinced as President Trump may be that the JCPOA is the ‘worst deal of all time,’ key allies of the United States take a fundamentally different view.

Moreover, by making the JPCOA the centerpiece of American push-back against Iranian aggression, allies and partners are gratuitously tempted to conclude that what is being tabled by Washington is a repackaged continuation of the Obama administration’s passivity toward Tehran. Simply substitute tough talk about the JCPOA for empty hand-wringing about Iranian-supported civilian slaughter in Syria, and otherwise it is business as usual. Would it be irrational for allies and adversaries alike to think that this is what’s at play?

The Trump administration cannot simultaneously oppose Iranian regional hegemony and accommodate itself to Assad rule in Syria. President Bashar al-Assad, his family, his entourage, and his enablers are the only Syrians willing to subordinate their country to Tehran so that Syria can be a permanent adjunct to Iran’s Lebanon-based affiliate: Hezbollah. Hezbollah—whose leadership cadre is steeped in international terrorism, drug-running, money-laundering, and assassination—is now providing Iran with an expeditionary ground force to prop up the Syrian regime and do Tehran’s bidding elsewhere in the region, all while working diligently to dominate Lebanon politically.

As an alternative to risking disunity through a JPCOA-centric strategy, the Trump administration might consider rallying the West to focus instead on Iran’s critical link to Hezbollah: the Assad regime. Already there are European voices counseling that Assad has ‘won,’ that the West should reconcile itself to this ‘fact of life,’ and that tens of billions of dollars in reconstruction assistance should be funneled through the regime sooner rather than later. Why anyone in the West would want to facilitate Iran’s destabilizing work, reward a war criminal, encourage mass thievery of taxpayer funds, and set the stage for endless conflict in Syria is a mystery. Yet if the Trump administration is serious about blocking Iranian hegemony, it will insure that those voices—which will become all the louder if the JCPOA remains the focus—will not prevail.

Things to be done? Reenergize official American support for accountability in Syria by making the collection of war crime and crimes against humanity evidence a high administration priority. Make it clear to friend and foe that the United States will oppose any reconstruction assistance being routed through the Assad regime: the experience of the United Nations in trying to provide humanitarian aid through regime operatives should be instructive. Arrive, at long last, at a post-combat stabilization plan for eastern Syria that prevents the stimuli for al-Qaeda derivatives—the Assad regime and Iranian-led foreign fighters—from establishing themselves in areas liberated from ISIS (ISIL, Daesh, or Islamic State). Build on the precedent of April 2017 (the kinetic response to a regime chemical attack) by deterring the regime from committing acts of mass murder on Syrian civilians. Work to the extent possible with Moscow and others to tamp down violence and—in accordance with multiple United Nations Security Council resolutions—open all of Syria to humanitarian assistance.

Surely the JCPOA is debatable. But under current circumstances it is a distraction. There are, to be sure, no silver bullets in Syria or anywhere else. But to make the JCPOA the centerpiece of Iran regional push-back is to fire a blank. Assad in Syria is essential for Iran. A strategy seeking to blur and ultimately avoid this fact is a recipe for defeat. Taking down the JCPOA will not address the central issue of Iran’s Syrian agent: a regime that has all-but destroyed Syria, destabilized the neighborhood, roiled the politics of Europe, facilitated the rise of ISIS and al-Qaeda, and created the signature humanitarian catastrophe of the 21st century.