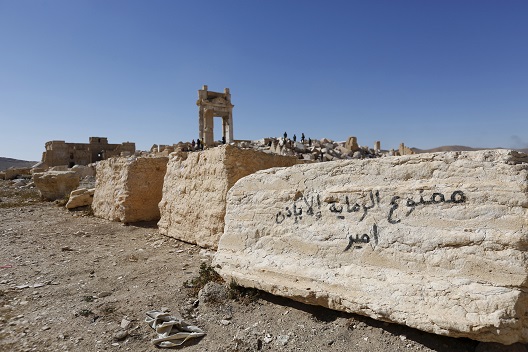 Photo:Graffiti (R) sprayed by Islamic State militants which reads "No shooting is allowed without the permission of the Emir" is seen on a stone, as journalists inspect the remains of the Temple of Bel in historic city of Palmyra, in Homs Governorate, Syria April 1, 2016. REUTERS/Omar Sanadiki

We should welcome this decline with reserved optimism, as any news of decreased killings is positive. Yet the numbers remain high, and the reasons driving the decline deserve better analysis to understand what is happening in Syria.

Journalism was prominent early in the Syrian revolution to support the nonviolent anti-regime protests by monitoring and documenting violations carried out by the regime, paramilitary groups, and opposition groups. The press sustained the revolution by amplifying the Syrian voice to the international community. In contrast to the 1980’s the Muslim Brotherhood uprising that Hafez al-Assad crushed by killing an estimated 20 and 40 thousand people. If the media had been present the way it is today, he may not have been able to commit such a massacre.

Here, the importance of the press in the Syrian revolution is revealed, as well as the gravity of its risks. Perpetrators do everything they can to prevent violations from coming to light, which is what has happened with the revolution—the Syrian regime went after journalists by killing, arresting, and threatening them. Within the first six months of the revolution, the regime targeted the famous cartoonist Ali Farzat. Non-government armed groups have also gone after activists.

One of the main reasons behind the decline is that many have left the country, or the most dangerous areas in particular under the regime or Islamic State (ISIS) control, as well as hot spots for clashes. These areas are blacked out—there are few independent sources to confirm—on behalf of controlling party in these areas. For instance, opposition armed groups often claim to kill  a great number of regime, Iranian, and foreign militia fighters, but independent media cannot confirm these claims.

Journalists and photographers have also adapted to the security situation, and developed to continue the work. Now local and International organizations train journalists and photographers on security practices such as digital security and encryption. For example, no journalist opposing the regime works with his/her actual full name in areas controlled by Assad, such as Damascus, Deraa, Homs, Hama and western Aleppo. Many journalists do not circulate work that is critical of Assad or ISIS due to fear of persecution. Even though some have left Syria, the pseudonyms used by journalists can still imprison them. A journalist told me that he could not currently work by his real name, although he is a resident of Istanbul, because members of his family are still in Damascus.

Some journalists have built relationships with fighting forces to gain protection and continue their work. Some opposition factions, for instance, escort journalists and protect them on battle fields, acting as less professional media military teams. Journalists are beholden to the armed groups protecting them. Some journalists use their relationships and acquaintances to conduct interviews with certain factions and their captives, like Lebanese journalist Carol Maalouf who interviewed Hezbollah fighters whose opposition forces captured territory in the countryside south of Aleppo, while other journalists work in areas under the control of the Kurdish autonomous government.

Building relations with combatants is not limited to local journalists, but extends to international newspapers as well. Hezbollah forces, for examples, accompanied correspondents from the New York Times, to the city of Palmyra after the regime and affiliated militias forced ISIS out of the city. Bishr Riyad Yazigi, the regime’s minister of tourism, invited Martin Smith of Frontline PBS to see a new tourism building located 16 kilometers away from the battle front and opposition forces.

These parties are no less dangerous than the Syrian regime, ISIS or the Nusra Front. ISIS controls life in areas under its control such as Deir Ezzor, Raqqa, eastern Aleppo, and Homs. Since establishing itself in Syria, ISIS has imposed its system, arresting Syrian activists and journalists and killing them. In addition, any journalist who wants to practice his profession must attend a “repentance” class and receive a work permit from the regulatory authorities. ISIS requires in its permit laws that the journalist does not offend the Islamic State and that he/she must present all their work materials to the organization’s offices before sending it to any media organization with which the journalist works.

Although ISIS boasts of its most brutal atrocities, it strictly controls the media to control its public image, fearing the damage that journalists can do by shedding light on topics such as racism between foreign ISIS members and Syrians. In Raqqa, for instance, foreigners make many the administrative decisions, and leave menial tasks such as cleaning the streets to the original citizens. There are many things that those who belong to ISIS are afraid to allow to reach the media opposed to them: details on their sources of funding such as oil, gas, and the smuggling of antiquities. Publicizing these matters would hurt the ISIS’s popularity and weaken its ability to attract Syrians and foreigners.

It is apparent that ISIS is fearful of the press and willing to pursue them even outside Syria’s borders. In Turkey it has killed Ibrahim Abdel Qader and his friend Faris Hammadi, Naji al-Jerf, and Zaher Herquat. Also, Nasser al-Sharqat, producer and presenter in Aleppo Today, was recently assassinated in downtown Gaziantep.

Jaysh al-Fateh and the Nusra Front also threaten journalists. Nusra is well known for interfering with radio stations in the areas it controls, even at one point prohibiting Fresh FM from broadcasting any songs it deemed forbidden.

Recently, a group of men in black masks have made recent appearances in some areas of Idlib; they are most likely followers of the Nusra Front or Jund al-Aqsa, the latter having worked with ISIS in the past and currently members of Jaysh al-Fateh. Their last strike against journalists targeted the kidnap of Ahmed Raslan, a journalist at Fresh FM in Kafranbel, in the last week of March 2016. They released him one day after his kidnapping.

It is evident that the decline in the deaths of journalists is a complicated matter, which has risks and drawbacks that affect the international image of Syria. Recently, the regime has started allowing foreign reporters and major media organizations to enter Syria, such as Danish Channel Odense, which the regime granted a permit in March. The regime controlling the media risks misrepresenting what really happens in Syria. Despite access to more information, there are biases that clutter the picture of what is happening on the ground, in addition to gaps or blackouts in information. For example, there are stories of war lords who are in control of besieged areas like Yarmouk that are difficult to confirm. The ones that stand to lose the most are the voices against violence.

Hasan Arfeh is a Syrian journalist based in Turkey. He currently works for Radio Rozana.