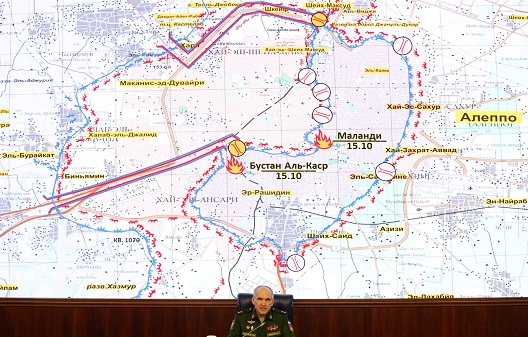 The US presidential election fast approaches, bringing the possibility of a change in US policy in Syria, meaning a review of Russia’s goals and achievements there is due. To that end the Atlantic Council’s SyriaSource has compiled a dataset of some 400 Russian actions relating to Syria since 2011, including official statements, military action, and diplomacy. What emerges is that the next US administration will face a Russia problem quite different from the one the current administration had envisioned and portrayed, which bears ill for the prospect of a negotiated settlement for Syria with Russia (or with the regime through Russia) under current circumstances.

Russia is fighting in Syria for at least some of the following reasons: protecting an ally; diverting attention from or increasing its leverage in the Ukrainian peninsula; protecting its access to a naval resupply depot in the Mediterranean; seeking to be taken seriously as a global player; fighting Islamists; and interrupting a perceived Western-led regime change campaign in Europe and the Middle East. All these motives share in common a need to preserve Bashar al-Assad and his regime. Assad is the aforementioned ally: he shares Russia’s opposition to Islamists; is no less hostile to and far more threatened by Western-led regime change; and is highly unlikely to challenge Russia’s access to strategic assets in Syria. Indeed, Russia’s refurbishing of the Hmeimem air base and the Tartous port facilities and development of other outposts throughout the country aim to grant it a long-term regional foothold. Military and intelligence ties between the regime and Russia are also as strong as ever.

Russian support for Assad is therefore quite logical. Put simply, Bashar al-Assad is far more likely to serve these Russian interests than any plausible alternative. That is why Russia will not take the steps necessary to impose a political settlement on Assad (assuming Assad would yield to Russian pressure). With only minor exceptions in which Russia suggested Bashar al-Assad step down—which acted more as delaying tactics legitimizing Russia’s negotiation efforts without moving peace talks forward—Russia has unwaveringly protected Assad in tangible ways while framing the conflict as a war on terrorists. Yet failed US overtures to Russia stubbornly presume the latter is more eager for a counterterrorism partnership with the United States than strategic victory in Syria—a belief held by influential policymakers in the White House, but that Russia’s actions should have shattered by now.

If Russia’s immediate goal is preserving Bashar al-Assad’s regime, then it has scored important victories to that end. With Russian firepower and advice, the regime appears more secure than it did on the eve of the Russian military intervention in September 2015, having taken key rebel areas of the country, pacified others, and put rebels in Aleppo in a precarious situation. But Russia’s intervention accomplished other things as well, including enhancing its regional standing, convincing international policymakers that intervening in Syria will bring war with Russia, and altering the fabric of Syria itself.

For example, Russia has used the intervention to force the United States in particular to treat it as a peer and respectable member of the international community. This explains Russian behavior at the United Nations and other international fora, where it has repeatedly vetoed measures that would hinder the regime’s military options and prospects or hold it to account for atrocities. All the while it has simultaneously engaged in peace negotiations with the opposition’s backers. Through this strategy, Russia has used the United Nations as a legitimizing vehicle, while at the same time forcing the United States to negotiate. The combination of the UN framework and a relatively disengaged United States has served Russia well, allowing it to escalate its military campaign in Syria while benefiting from the legitimizing effect of international negotiations.

Russia’s tactics and strategy have also altered Syria in profound and likely irreversible ways. Russia’s destruction of opposition-controlled population zones and civilian infrastructure has made large areas of Syria uninhabitable, altering the country’s demographic map to favor the regime to a far greater extent than the regime could on its own. Population displacements are also a deliberate tactic. Largely Sunni Arab rebel groups that surrender are forced to leave strategic geographies to the more remote province of Idlib. Since pro-regime allied forces, including Russian air support and mercenary fighters, retook Palmyra from the Islamic State (ISIS or ISIL) in March 2016, they continue to prevent residents from returning, instead allowing Shia militiamen to confiscate homes and settle their families there. Similar events have occurred in Homs city. Around Damascus, the regime, at times using Russian intermediaries, negotiated local ceasefires that held until the regime no longer felt it necessary maintain them. At that point it forced opposition-held cities to renegotiate on worse terms or be attacked again, with the basis of new agreements being the departure of opposition fighters and their families.

Russia’s intervention also modified regional power calculations, offering a partnership or at least working relationship to regional powers sharing basic goals, or unable to secure their goals in the absence of US involvement in Syria. In the past year bilateral meetings between Russia and regional states has increased. Jordanian and Russian officials met in October 2015, less than a month after Russia started its air campaign, for military coordination. Despite Turkey’s support for the rebels and its shooting down of a Russian jet, Russian-Turkish relations have improved since Turkey apologized in June, and in October the two countries signed a deal to build the TurkStream gas pipeline under the Black Sea to Turkey. Outside the Syria context, Russia has been strengthening ties with Egypt, whose president made sure to visit Russia before the United States.

Lastly, Russia’s actions act as a powerful psychological deterrent to US military action. In the debate over the direction of US policy in the new presidential administration, prominent voices are insisting that any significant US intervention in Syria would mean war with Russia, a nuclear power, and therefore a non-starter. After decades of Cold War thinking, there is in the United States an understandable deep, reflexive opposition to any course of action that could lead to war with Russia. Belligerent Russian statements seek to capitalize on this by reinforcing the idea that a US intervention in Syria would lead to nuclear Armageddon, knowing that whatever interests the United States has in Syria do not justify that.

This is the situation the incoming US administration will face. Whatever its merits, the United States’ limited involvement in Syria granted Russia a powerful first-mover advantage, which in turn has complicated US policy options, granted a strategic foothold to a historical rival, facilitated mass atrocities, and undermined the concept of an international liberal order. The belief that Russia valued US and international goodwill more than its hard geopolitical interests turned out to be wrong. The assumption that what the United States saw as a “quagmire” would be judged similarly by Russia was arrogant and misplaced. Despite US warnings that destruction and loss of human capital will make ruling Syria impossible to govern, Russia seems unfazed and comfortable operating in this environment.

The next US president should understand that Russian and US worldviews and interests are different. The former are probably irreconcilable. The latter may not be, but only if the cost to the regime and its allies is raised directly or by proxy thereby compelling Russia to recalculate its investment in the Syrian regime. If the incoming administration decides that none of the various policy options for doing so are worth the risk, or that the negative fallout from Russia’s involvement is acceptable, so be it. The arguments and analyses are well known by now. What US leaders cannot do, however, is ignore over five years of incontrovertible evidence and risk yet another half-decade pretending Russian behavior in Syria and its regional and global effects will change if US policy in Syria does not.

Faysal Itani is a senior fellow with the Atlantic Council’s Rafik Hariri Center for the Middle East. Hossam Abouzahr is the editor of SyriaSource.