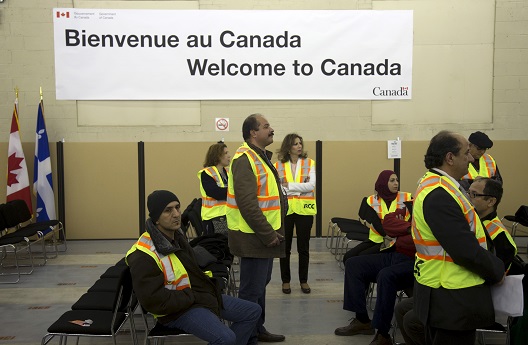 In late 2015, Canada’s Liberal Party led by Justin Trudeau was elected, in part on a promise to resettle 25,000 Syrian refugees. The Liberal Party leveraged the ‘success’ into branding opportunities—championing ‘the Canadian model’ at home and abroad. They delivered, but, in their haste, the limitations of Canada’s foreign missions were exposed as problematic with inefficient policies and practices. Without political pressure to learn from these mistakes, it is unclear if Canada’s policies for processing large numbers of refugees will improve.

Canada’s visa officers partnered with the International Organization for Migration (IOM) and UN High Commissioner for Refugees (UNHCR) in Turkey, both of which are high capacity branches. The IOM ultimately worked as a referral service for the Canadian visa officers, despite being better suited to conduct the process admissibility themselves.

The IOM in Turkey had qualified Syrian nationals on staff as of 2015—Arabic speakers with regional, cultural, and political knowledge. This was precisely the capacity the Canadians lacked. The IOM even interviewed Syrian families for referral using the Canadian government’s official forms. Yet Canadian officiers conducted admissibility interviews a few days later, with their own visa officers filling out the same forms and asking the same questions through interpreters.

In the initial phase, October 2015 to February 2016, visa officers operated under an unrealistically tight timeline. The Liberal Party had promised to resettle 25,000 Syrians in Canada by the end of 2015, despite being elected in mid-October. It was unreasonable to expect any of Canada’s staff in Ankara to learn Arabic temporarily, for native French and English speakers who may or may not have Turkish, especially since the host country’s language is entirely different from Arabic.

Numerous errors were all but guaranteed due to the rushed processes. Many deserving Syrians were ruled inadmissible due to associating with the opposition, certain activism, mistranslations, or visa officers’ general ignorance of (and poor speculations on) the Syrian context.

Immigration, Refugees, and Citizenship Canada (IRCC) is well aware that mistranslation and/or misrepresentation is not uncommon in overseas refugee and in-country asylum determinations—but has done little to remedy the problem. The criteria for someone to serve as an interpreter is too simplistic, while requirements for translating official documents are only slightly more demanding.

Many policy-makers in Canada viewed the crisis in Syria as temporary which encouraged short-sighted policies and impaired the chances of quality capacity building. Over the rushed five months period processing refuges, visa officers processed almost half of the 55,000 refugee quota with only an additional forty staff with limited overseas experience briefly join them from May 9 to June 18, 2016.

The need for Syrian resettlement existed well before October 2015, and millions of Syrians still remain without a durable solution in Jordan, Lebanon, and Turkey—yet no efforts have been made to put in place sustainable goals or repeatable processes. A considerable backlog of cases, with private sponsors ready and willing, are still waiting on government approvals.

Instead of developing a system from scratch without the proper structure, skills, and capacity, the Canadian government could have outsourced the entire process of overseas resettlement to an organization—like the IOM—which operated throughout conflict, better suited to process refugees for resettlement.

Each of Canada’s resettlement programs—Privately Sponsored Refugee (PSR), Government Assisted Refugee (GAR), and Blended Visa Office Referral (BVOR)—features refugees with a different mix of socioeconomic backgrounds. English-fluent and upwardly-mobile Syrians more likely to be in touch with Canadians hoping to sponsor them privately. In contrast, Syria’s rural and urban poor are more likely to find themselves in the specific refugee camps in Jordan and Lebanon through which the GAR program operates.

PSRs, BVORs, and GARs are all supported for a period of twelve months, whether through a private group, a congregation, or the government. All are expected to become financially self-sufficient after this period, even though many PSRs arrive fluent in English, while some GARs arrive illiterate even in their native Arabic.

“Until now, PSRs are doing better than GARs,” Salam Khorshid, a settlement counsellor in Toronto, and a PSR herself from Damascus, explains. “Many PSRs were able to face the challenge of ‘Month 13’ better than GARs, because some sponsors were there to support them and didn’t leave things without following up.”

Underserving any refugee population impairs its ability to become financially independent. Neglect then empowers narratives that resettling refugees is burdensome and was injudicious in the first place.

PSRs fare better than GARs, largely because they have more support and fewer needs. “PSRs benefit from a network of relationships with their sponsors that they can use to find employment,” point out Jennifer Hyndman and Michaela Hynie of York University.

“The language takes so much time. Especially for older people, thirteen months is not enough,” adds Ousama al Khatib, Project Manager at the Syrian Canadian Foundation and a PSR from Syria himself. “I am working in the community and seeing the gaps: the gaps in the ESL [English Second Language] programs, and the gaps in the psychosocial support programs.”

“So for example, to open a bank account, GARs need to go to a settlement agency and go through a process. PSRs go to their sponsors. This saves them time, and saved time means more achievements. Basically, I would say that the GARs are experiencing a lack of services, a lack of social support, and a lack of community. Even friends, just to introduce you to the country, to make you feel welcome.”

A recent official report conducted by IRCC was seen to support the idea that PSRs—by performing better economically than GARs—were more desirable for resettlement. Janet Dench, Executive Director of the Canadian Council for Refugees, challenged that takeaway. “Clearly the [IRCC] report shows there is not enough support for GARs,” she said.

“Most of the support programs for GARs,” Khorshid adds, “they find out about by coincidence, and most programs are first come first serve. The programs are not specific to meeting clients’ needs, and are not designed according to reality, but according to the assumptions of the creators of the programs.”

A basic needs assessment mechanism would improve integration by introducing more flexibility in the formal support period. GARs require more than twelve months to integrate into Canadian society, while some PSRs need less. PSRs and BVORs who are desperate for a longer support period often receive it informally. Finally, differences in economic performance should be viewed as a function of needs, not through a lens of ‘desirability.’

In December 2016, a year after the initial surge in Syrian resettlement, the Canadian Senate published a thorough report, “concerned…the Government of Canada is not allocating enough resources to help [Syrians] integrate.” Such reports make recommendations but have no legislative component; the unelected Canadian Senate is much less powerful than its American counterpart. The Senate requested “a complete and detailed response from the government” to their findings on February 8, 2017. The report was then referred to the House of Commons’ Standing Committee on Citizenship and Immigration on November 1, 2017, though it has yet to appear for discussion on their calendar, indicating a lack of priority. No legislation has been tabled or formally drafted, and Syrian-specific quotas were dropped from IRCC’s immigration plans last year.

When this policy emerged in late 2015, a narrow majority of Canadians polled did not have an interest in resettling Syrians, mostly due to financial concerns, but the party was elected nonetheless. Those in favor of resettling Syrians and involved in private sponsorship are fatigued by the lengthy processing times.

Unfortunately, most Canadians believe that the issues surrounding the resettlement of Syrian refugees were resolved three years ago. Domestic politics and the priorities of the federal government, have moved on as well. The confluence that saw the Liberal Party of Canada elected with a focus on Syrian resettlement has dissipated.

Most Canadians are unaware of the current realities in Idlib province and the high probability more Syrian refugees will soon be seeking refuge abroad. Will Canada learn from its previous mistakes to improve the process for future refugees? It seems neither politicians nor the public have the stomach or inclination to revisit the dire issues that will continue to plague Syrian refugees.

Gareth Chantler is a freelance Canadian writer based in Gaziantep, Turkey.

Image: Photo: Immigration, Refugees and Citizenship Canada (IRCC) contractors including translators wait for the arrival of Syrian refugees at the Welcome Centre in Montreal, Quebec, December 12, 2015. The second military airlift of refugees is arriving in Montreal on Saturday, which will see a total of 10,000 resettled by year-end and an additional 15,000 by the end of February, fulfilling the Canadian government's pledge to accept 25,000. REUTERS/Christinne Muschi