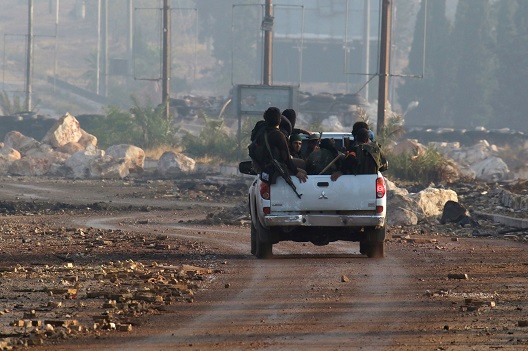 Last week, Jaysh al-Fateh (JAF), the opposition Islamist coalition, launched a large-scale military operation to break the regime’s siege on Aleppo, but their advance has slowed. They launched attacks on areas that have not witnessed combat before, including the Assad Suburb (Dahiyat al-Asad) in western Aleppo. Having taken control of most of the suburb in less than 24 hours, JAF is closing in on the Military Academy, which is considered to be the key to Aleppo. JAF has already launched its offensive and implemented a plan to blockade the Military Academy. The academy is the main operations room for the regime’s forces in northern Syria and houses Russian and Iranian officers as well as pro-regime Shiite militias from Lebanon’s Hezbollah and Iraq’s Harakat al-Nujaba.

Of interest and importance is the direct participation of senior opposition leaders in these operations, such as Jabhat Fateh al-Sham’s commander Abu Muhammad al-Julani, as well as Abu Yahya al-Masri, commander of Ahrar al-Sham. Pictures of Al-Julani and al-Masri in operation rooms overseeing the course of the battles have been posted online. Meanwhile, Ahmed Sinda, Jaysh al-Islam’s commander in northern Syria, was killed during the course of a skirmish. The presence of leaders alongside fighters provides them with a major morale boost in what they have deemed “the grand battle of Aleppo.”

The battle of Aleppo began as over 200 Grad missiles were launched at the Military Academy by factions of the Free Syrian Army in the outskirts of western Aleppo, which paved the way for the attackers to enter Assad Suburb. Regime troops held off the assault for only one day before JAF fighters succeeded taking most of the suburb. The following day, other fighters from JAF moved in on the 1070 Apartment Project located south of the military academy. The Turkistan Islamic Party then sent in a car bomb driven by a Turkish fighter to blow up one of the project’s main barricades, which enabled them to access the entire neighborhood. Subsequently, a street battle proceeded as JAF brought most of the project’s streets and alleyways under its control.

For this operation, JAF mobilized a greater amount of ammunition than it had in earlier battles, and was joined by new factions, such Harakat Nour al-Din al-Zinki, Suqour al-Sham, and over 500 fighters that had formerly fought with Jund al-Aqsa, which recently swore allegiance to Jabhat Fateh al-Sham. These affiliated factions form a significant addition to JAF, providing it with over 2,000 new fighters according to sources within Syria. This makes JAF the most powerful opposition military force in the country, particularly because it includes both Fateh al-Sham and Ahrar al-Sham.

Jabhet Fateh al-Sham posted a video claiming that there are 40 car bombs spread throughout eastern Aleppo carrying dozens of tons of explosives that are prepared to open the way for the rest of the fighters. Until now, four car bombs driven by two Turks, an Egyptian, and a Saudi have been detonated. Car bombs are devastating weapons and are part of the psychological war: The devastation they cause coupled with how difficult they are to stop in urban warfare scares the regime’s soldiers. The regime’s forces, on the other hand, have relied on natural elements. For example, with the weather cooling down, fog has helped protect the regime artillery attacks. However, JAF fighters have also tilted this element in their favor by using it to help dispatch suicide bombers and take regime troops by surprise.

Opposition forces have also taken advantage of the regime troops’ low morale. According to some fighters, regime troops flee as soon as they are put under pressure. This is because most of the regime’s fighters are forced to pick up arms and enlist in the army, whereas opposition fighters see this as an all or nothing fight and put in their full effort. Abu Jabr, an official from Ahrar al-Sham’s northern branch, stressed, “every house that opposes Assad has in it a prisoner, killed family member, or an injured person. Our war against Assad is a war of oppressed people.” In other words, most fighters have nothing to lose and are fighting for their home. In this way, the Islamic religious concept of “martyrdom” proves to be an essential principle to these fighters.

JAF has released a declaration announcing that stage one of the battle ended after it took control of Assad Suburb and the 1070 Apartment Project. It went on to attack neighborhoods of western Aleppo (including New Aleppo, Hamdaniya, 3000 Apartment Project in Hamdaniya, al-Amiryya, Sayf al-Dawla, and Saladin) military areas and asked civilians to stay indoors or head to shelters and to stay away from military checkpoints. However, it has not been able to take the 3000 Apartment Project, which has slowed its advance.

Russia resumed its bombardment of the city’s neighborhoods on Monday after having ceased for a week and a half. Military aircraft did not leave the skies above the city and combat zones. Activists in the city accused warplanes of dropping barrels containing poisonous chlorine gas on a suburb far outside of JAF’s control, while regime forces accused the opposition fighters of the same. Meanwhile, opposition fighters have been trying to take advantage of their difficult-to-target positions between buildings and under fog cover. Likewise, some fighters have even resorted to burning car tires to create black clouds to make targeting them harder still.

Military commanders in the operation room claim that the goal of the battle is to completely takeover the western side of Aleppo, and that the battle will not be limited to breaking the siege. In turn, Ahrar al-Sham confirmed that it is targeting Russian officers from afar by bombing the military academy with Grad missiles. The group also stated that it has blocked two of the regime’s military convoys from entering Aleppo via the Khanaser-Ithriya road from Hama in central Syria. If they can keep this up, it will limit the regime’s ability to supply its troops.

JAF is trying to improve the coordination among its disparate groups. It has some groups advance, while others rest, and then they alternate. During the first stage of the operation, the number of fighters in JAF exceeded 1,500, but the group now awaits an additional detachment before it moves on to the second stage. As part of the propaganda war, JAF released a statement saying that opposition fighters are heartened by their advances thus far, and that feeling is shared by all of the other opposition parties.

Their joy, though, may only be temporary, as their advance has slowed and Western officials are concerned that Russia is planning for a final attack on Aleppo. Eight Russian warships and an aircraft carrier are scheduled to arrive in Syria as early as Wednesday. Recently, the Russian ambassador to the US caused concern that Russia intends to raze Aleppo the way it did Grozny to wipe out Chechen separatists, when it tweeted pictures of Grozny saying “#Grozny today is a peaceful, modern, and thriving city. Ain’t that a solution we’re all looking for @JohnKerry? @BorisJohnson? #Aleppo.”