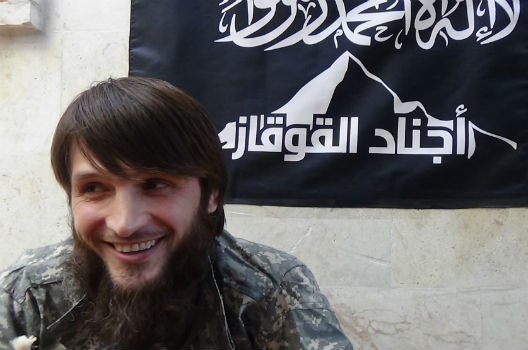 Residents in Latakia and Hama in northern Syria are preparing for Russian air strikes and potential ground attacks. Intensive reconnaissance missions fill the air with the roar of plane engines for hours on end in the rural airspace of Latakia and Hama. Russian forces have already begun bombing opposition positions in Latakia, striking the US-supported and trained First Coastal Division. Civilians fear that the Russians will continue bombing opposition-controlled areas in the coming months, ruining any chances to stabilize areas behind the front lines.

In Latakia and Hama, Russian voices are often heard speaking over communication devices in Hama and Lattakia, specifically the Wouxun model—the same device the opposition forces use to eavesdrop on the Syrian regime and its supporting militias. Fighters from the Caucasus and Chechens who have joined the armed opposition in particular have listened to these communications from Russian forces joining the ranks of President Bashar al-Assad’s military with great interest.

Many armed opposition groups operating in Syria are comprised primarily of fighters from Chechnya and the Caucuses. Auji Arsalan (also known as Abdel Hakim al-Shishani) leads Ajnad al-Qawqaz (Soldiers of the Caucuses). Muslim al-Shishani leads Jund al-Sham (Soldiers of the Levant). These groups concentrate their forces in the Ghab Plains in the Hama countryside near the Mediterranean coast. The leader of the Fatiheen Brigade, also known as Muslim al-Shishani or Abu Muhammad, is attempting to establish formidable defensive lines in the more dangerous inland areas over which the opposition maintains control. The most prominent area in which Chechen fighters have gathered is in the Jabb al-Ahmar and Jabb al-Ghar regions near the cities of Slanfah and Mt. Nabi Yunis, a peak that overlooks Slanfah and Ghab Plains and give whoever controls the ability to strike any would be attackers.

Abu Ubayda, a twenty-four year old fighter who goes by al-Sharkasi al-Qawqazi, said in broken Arabic in an exclusive dispatch, “We have monitored activity and communications in the Russian language in the areas close to Nabi Peak. We believe that the Russians are attempting to lure us into a battle similar to the battles in Chechnya.”

Q: Are you prepared to fight the Russian Army? Do you have sufficient arms?

Abu Ubayda: Yes, I am young but at my side are dozens of highly experienced fighters who played important roles in the Grozny operations, especially the commander Abdel Hakim. We prepare daily and monitor communications in Russian. Our weapons are the same as the rest of the opposition. We are not concerned about a lack of arms or ammunition.

Q: What preparations are you undertaking?

Abu Ubayda: This is a security issue. We are not allowed to comment on such matters. We are focused on the Russian soldiers, and we depend most on experienced fighters who have fought against Russian soldiers in Grozny, the capital of Chechnya.

Muslim al-Shishani, also known as Abu Muhammad, is one of the best Chechen fighters in the ranks of the Syrian opposition. He arrived in Syria in early 2013 when foreign fighters were still few in number. Al-Shishani stayed with a handful of fighters in the forests of Latakia and became widely known for his kindness towards Syrian civilians. This reputation gave him a strong popular base, which he still enjoys today. As one of the most prominent soldiers in the fight against the Russian government, he has a long history of fighting in Chechnya. As he puts it, he is eager to “hunt the Russians.” In an interview with Commander al-Shishani, he confirmed that Russia fears the Syrian Revolution may spread and that Chechnya is primed for a massive popular revolution.

Q: How did you hear of Syria?

Al-Shishani: I studied at the Institute of Islamic Studies in the city of Grozny in 2006 and 2007 and most of the teachers were Syrians who had fought against Hafiz al-Assad and had left Syria following the 1982 massacre in Hama.

Q: Do you plan to stay or to return?

Al-Shishani: The situation in Chechnya is primed for a revolution against corrupt rule. If the war in Syria ended and the Syrian people achieved their demands, I would certainly return to the jihad and fight in my country. It is one of my priorities, and I guarantee that there will be demonstrations within a few months in Grozny in the town of Serzhen-Yurt.

Q: What is your opinion on the recent Russian presence in the Syrian coastal region?

Al-Shishani: Russian experts and soldiers have been in Syria for a long time. We noted their presence during the battle in the border city of Kessab in June, 2013. I heard many insults in Russian during the fighting which alerted me to the fact that they were heading to the Syrian coast. As of now most of the Russian-speaking fighters are concentrated in the Syrian coastal region.

Q: What preparations are you undertaking? Do you think clashes are imminent?

Al-Shishani: We are perfectly certain that the Syrian regimes’ military policies in the Syrian coastal region are an extension of the Russians’ experience in the mountains of Chechnya. We are attempting to establish a defensive line in the region of Nabi Yunis where we have noted a Russian presence. We are absolutely certain there are Russian groups whose mission it is to attempt to break our lines and create confusion, which the remaining troops will then exploit. We are well aware of this old tactic and we are trying to cover all the gaps and deploy skilled snipers in order to check their advance. We are digging trenches and building fortifications which will further fortify our position.

Q: Is there any coordination between you and other groups in the armed opposition?

Al-Shishani: Yes, we are coordinating closely with other armed opposition groups, especially Ansar al-Sham and the other brigades, including the Nusra Front. The Syrian regime has launched several failed attempts at advancing, so we expect a battle in the near future. A number of their soldiers were killed, however we were unable to confirm the killing of a Russian soldier. All of our fighters are on the lookout for any Russian soldiers.

The Chechens in Syria, despite being in a new country, feel they are on familiar ground. For them, this fight has both religious and political aspects. The Syrians’ struggle is just a new iteration of their fight against Russia, an old oppressor with whom they have faced off before. Their experience and knowledge of Russia’s capabilities will bolster the opposition’s chances to withstand the Assad regime’s forces and their Russian allies. Their presence, though, is a reminder that the fight in Syria has become global.