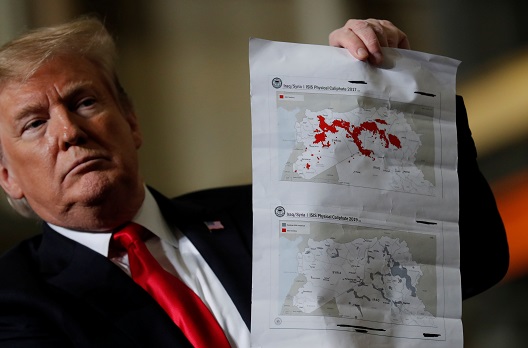 Back in June 2014, at the al-Nuri Mosque in Mosul, Iraq; Abu Bakr al-Baghdadi declared the establishment of an Islamic State (ISIS) and named himself its caliph. Over the subsequent years, the Islamic State quickly managed to control wide swaths of territory in Iraq and Syria, until it became so dangerous it took an international coalition of eighty states and unions to cripple it.

Ultimately, ISIS lost the areas it controlled, and its defeat was in sight. Yet five years later, ISIS is anything but defeated. On April 28, 2019, al-Baghdadi reappeared in a video in an unknown location seeking revenge for his lost territory. The Islamic State was crippled this past year in several fierce battles with the international coalition, but is regrouping and the international community needs to recognize this and redevelop its strategy.

The Battle of al-Baghuz

The Islamic State was able, by virtue of the military and administrative experience of local and foreign fighters, to organize its ranks quickly to prepare for any major confrontation with the United States and international coalition forces. However, it was not enough to face the major battle from the Syrian Democratic Forces (SDF) and international coalition, and soon the borders of al-Baghdadi’s state were less than ten towns in the far east of Syria.

Throughout October and November of 2018, ISIS put up a fierce resistance in Hajin and al-Susa, part of Deir Ezzor province in the east, despite the fact that it is an area that lacks easily defensible terrain. It seems ISIS choose Hajin as part of larger strategy in order to draw in SDF fighters into a battle in its favor. And ISIS chose al-Baghuz, a small eastern town along the Iraqi border and Euphrates River that has the only high ground—known as Shafta al-Baghuz—in the area.

ISIS prepared well for this battle. It dug trenches, tunnels, and planted mines around the entire area. It captured tens of thousands of Syrians and families of foreign migrants, using some as human shields to buy time it needed by claiming that it had to guarantee safe passage for the civilians forcing the fighting to stop. ISIS also depended on foreign fighters whose countries’ of origin had refused to allow them to return. They assumed these fighters would never surrender because they had two grim choices: prison in Iraq, or the SDF handing them over to the regime should the United States withdrew.

ISIS selected al-Baghuz because it contains a lot of natural caves, most of them in the highland of Shafta al-Baghuz. It also dug a covered trench toward the Iraqi border seven hundred meters away, and prepared a number of munition storages and a workshop to produce explosive-laden vehicles.

This plan was not to protect a piece of land for the Caliphate, nor to reclaim land for it, as the extremist organization had done at the beginning of its rise. Rather, it was to achieve a victory that it would later fashion through motivational publications for the coming generation of its members. It could say that the elite of its fighters stood firm throughout eight months of continuous battles against eighty states with their aircraft, armored vehicles, and 45,000 fighters. It is something that ISIS could use in future recruitment operations.

ISIS’s leaders who planned all of this did not imagine that such hard circumstances and limited options would split their fighters’ ranks between those accepting their decisions and those rejecting them. Hundreds of fighters preferred to surrender themselves to the SDF or to flee from al-Baghuz. Some of those who rejected ISIS’s plan for al-Baghuz were able to get to Idlib by hiding in oil tanker trucks and paying large sums to SDF leaders.

The leaders of the first battle of al-Baghuz fled toward Iraq to the vicinity of al-Qa’im, near the ISIS pockets in the Anbar desert. Iraq was the only choice, because Iranian militias were spread along the western bank of the Euphrates, having taken into account that ISIS fighters might flee from al-Baghuz to al-Bukamal’s surrounding desert.

In his most recent video, al-Baghdadi announced the end of the Battle of al-Baghuz and the killing of a number of ISIS loyalists in the battle. He then promised to avenge these ISIS fighters who were killed and that ISIS would continue fighting against its enemies.

ISIS Takes on a New Form

It seems that ISIS bought time during the battles in Hajin and al-Baghuz as part of a larger plan; to grant its fighters the chance to regroup. These fighters supposedly number in the thousands and are spread out in the Syrian desert in a triangle between al-Sukhna in Homs province, al-Mayadin in Deir Ezzor province, and Ma’dan in Raqqa province.

Starting from these pockets, ISIS fighters have access to the eastern al-Suwayda’ desert, western al-Bukamal desert, al-Mayadin desert, and al-Salamiya desert to the northeast of Hama. From there, they can launch surprise attacks on Iranian militia patrols and convoys; which are spread out across the western bank of the Euphrates from al-Bukamal desert to al-Mayadin city.

ISIS chose the triangle of al-Sukhna, al-Mayadin, and Ma’dan because it borders the regime’s forces, and they have, thus far, been an easier enemy than Iranian Shia militias. Nonetheless, ISIS still has small pockets of fighters in the area between al-Sukhna, al-Bukamal, and al-Zakf, which is the area along the western Anbar desert.

Since 2015, ISIS had an interest in the Syrian desert because it connects to most provinces. In 2015 and 2016, its forces reached al-Tanf east of Homs, al-Qalamun north of Damascus, and al-Sa’n north of Hama. ISIS also established good relations with the Bedouins in the area, and some joined its ranks to provide reconnaissance in the desert—an area which no group can fully control given how open and undeveloped it is.

Because of the heavy investment by ISIS in establishing this area as a central base, it is likely a storage site for medium- and heavy-caliber weapons with various munitions. This area could then be a launch point for ISIS’s military operations or a refuge in case it is defeated.

ISIS learned the way it conquered and ruled could not last. So it has adapted for the desert, a harsh landscape difficult for its enemies yet more easily defendable. ISIS forces can now move to surrounding areas and launch quick military operations. However, the extremist cells that are present in SDF controlled areas that launch attacks with explosives and assassinations likely operate separate from ISIS’s central leadership. Coalition aircraft have launched dozens operations to capture these cells, so their chances of survival will be relatively low.

Despite its military defeats and the end of its reign, the main grievances that led to the creation of ISIS are still present: the foreign states’ involvement and the lack of will to bring down the Assad regime early in the conflict and the growth of Iranian and Shia influence at the cost of native Sunnis. The United States is expected to withdraw from the region; leaving behind the consequences of its failed strategy. This strategy is what created ideal circumstances for ISIS in 2014, and the projected US withdrawal—if it does happen—will be a major factor in ISIS’s return. ISIS will take presumably advantage of the gap left by the United States. The weak technical and military capabilities of the states who might fill this gap is likely to create more chaos and uncertainty.