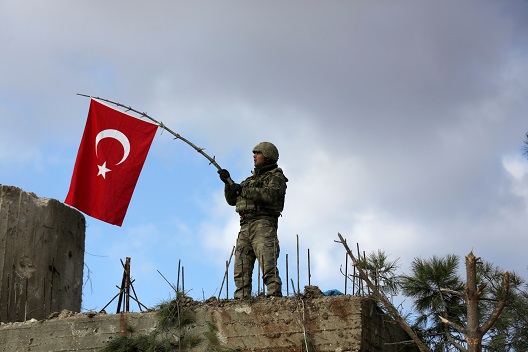 Turkey’s cross-border intervention in Afrin, the Kurdish-controlled enclave in northwestern Syria separated from other Kurdish territory in northeastern Syria, has advanced to the outskirts of Afrin city. The offensive began on January 20th, 2018, with the intention of ousting the Peoples’ Protection Units (YPG) from the territory it controls in the northwest. After breaking YPG defenses surrounding the city, Turkish ground forces have moved swiftly to besiege the city and, presumably, will begin urban combat operations in the next few days.

Over the course of the 52 days of the operation, the Turkish military has suffered 43 casualties, or about 0.83 per day. An additional, 250-350 men from Turkish backed militias have also been killed in the fighting, which averages out to between 4.8 and 6.7 Syrian militiamen killed per day, depending on which figure is used. The YPG, in comparison, is estimated to have lost between 600 and 900 fighters depending on the source, which averages out to between 11.5 and 17 killed per day. Based on these figures, the Turkish armed forces and their allies have at least a 2:1 casualty advantage over the YPG.

The next phase of the operation is fraught with risk for civilians trapped inside Afrin city and for the fighters on both sides of the conflict. The duration of the fight for Afrin city, it appears, is dependent on how many militia members the YPG has left inside Afrin city. The Turkish armed forces will, of course, eventually take control of the city. This is not in doubt. Ankara has superior fire power and escalation dominance and can simply use overwhelming firepower when needed.

However, during similarly scoped military operations to clear Kurdish militant cadres from cities in 2015-2016 in Turkey’s southeast, urban combat operations lasted between 78-101 days. Afrin city is, according to the 2004 Syrian census, smaller than the Turkish cities of Cizre and Silopi, where urban fighting lasted for 78 days in 2015-2016.

The fight for Afrin may be different. The YPG has a different set of incentives than the YPS, a wing of the Kurdistan Workers’ Party (PKK), comprised mostly of local youth from Turkish towns in the southeast, that did the bulk of the fighting in 2015/2016. The YPS was fighting for local autonomy inside Turkey, alongside PKK regulars sent to improve command and control. The YPG, in contrast, has already achieved this goal in Syria (albeit within the broader context of civil war) and has to manage its interests in Afrin alongside its continued presence in Syria’s northeast.

For now, the YPG has pledged to defend the city, a declaration that could prolong combat in the city and increase casualties on all sides—including for civilians that cannot or choose not to flee the city. The broader question is, as always with a state’s use of force beyond its borders, is what comes after the fighting stops.

In Turkey’s southeastern cities, the 24 hour curfew imposed during the 78-101 days of fighting was partially lifted in March 2016. One year later, in March 2017, the curfews ended. The military operations in Turkey’s southeast also resulted in greater than 355,000 internally displaced people. In Afrin, the Turkish military does not yet have the capability to impose a curfew, a factor that could complicate the fight in the coming days. The Turkish military is also manning a series of check points in Turkey’s southeast to prevent PKK infiltration from the mountainous Turkish-Iraqi border.

In the past 53 days since Olive Branch began, 12 Turkish soldiers have been killed in southeast Turkey, for an average of one lethal attack every 4.3 days. The PKK’s history of conducting hit-and-run guerrilla attacks could foreshadow the challenges the Turkish military will face after Afrin is initially cleared of YPG fighters. Afrin’s heterodox population may be hostile to a Turkish imposed governing council, given the make-up of the Turkish backed groups and concerns about abuses committed during the military intervention. In general, Afrin’s population is thought to be pro-YPG/PKK in its ideological outlook, given the area’s demographics and, before Operation Olive Branch, its relative insulation from the broader Syrian civil war’s violence. Moreover, both the Syrian regime and its main ally, Iran, view an open-ended Turkish military presence in Syria as a threat. Therefore, the regime could encourage YPG cadres to carry-out attacks to bloody Turkish forces, in order to force a withdrawal at some point in the future. The Syrian regime has pursued this exact policy in pre-2011 Iraq, albeit against the United States military and in support of al-Qaeda in Iraq, the Islamic State’s predecessor.

The Turkish armed forces will soon occupy much of Syria’s Aleppo governorate. The territory taken in Operation Olive Branch connects with Turkish controlled northern Aleppo, which the Turkish military took control of during Operation Euphrates Shield. The Turkish military has a few thousand troops in Syria and shows no signs of leaving. The YPG will not evaporate and could take advantage of local hostility in Afrin and, in theory, regime support to bloody Turkish-led hold forces. The future is unclear, but if it looks anything like Turkey’s southeast, Ankara could be trading urban combat for the dangers of an open-ended hit-and-run attacks.

Aaron Stein is the senior resident fellow with the Rafik Hariri Center for the Middle East.