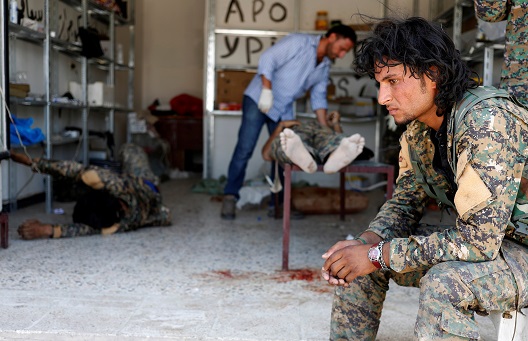 For the past several years, this writer has resisted joining the “It’s too late to do anything about Syria” chorus. That resistance is, at long last, breaking down, at least with respect to what is happening in eastern Syria. We are now reaping the whirlwind for a misconceived policy that has given the precious gift of time to various toxic, murderous actors—ISIS (ISIL, Daesh, Islamic State), Iran, Russia, and the Assad regime—to do their worst to the people of Syria and to the interests of what remains of the West.

The whole world watches as the United States Central Command (CENTCOM) and Department of Defense (DoD) mimic a surgeon who ignores his patient’s mid-operation heart attack because the scheduled procedure is kidney removal. “Our mission is to defeat ISIS: period.” This is what CENTCOM and its Pentagon overseers proclaim as Iranian-led foreign fighters move into eastern Syria to reestablish its client, in-the-service-of-Hezbollah, Assad regime. If Kurdish-led militiamen—the “partner force” of the anti-ISIS “coalition”—succeed in declaring victory over ISIS in Raqqa, perhaps the “city council” they have contrived can constitute a welcoming committee for Iran and for the regime Tehran carries on its back.

We now approach the third anniversary of the ISIS siege of Kobani, a large, Syrian Kurdish town on the Turkish border. Breaking that siege marked the beginning of a Kurdish militia—later expanded with Arab auxiliaries—serving as the ground combat component of a desultory coalition military campaign against ISIS in Syria. Notwithstanding a “caliphate capital” in Raqqa overseeing—at its leisure—the overrunning of much of Iraq, genocidal operations against Kurds and Yazidis, and transnational terror acts in Paris, Brussels, and multiple locations in Turkey, beating ISIS in Syria was never deemed important enough by American or European leaders to be done by professional military ground forces. No need to hurry: militiamen with American advisors would be good enough for Syria work.

The ideological basis for this approach had a veneer of respectability: only “indigenous” elements could kill extremism and keep it dead. The “indigenous” nature of Kurdish-led forces operating in Arab areas was never explained. In truth, the ideology was an alibi. It was convenient to work with a Kurdish militia: even one affiliated with an American-designated terrorist organization; even one deemed hostile by a NATO ally. No effort was made to engage an Assad opposition deemed by Washington to be the “legitimate representative of the Syrian people.” No effort was made to create a professional, ground force coalition-of-the-willing to kill ISIS quickly and to work with the Syrian opposition on post-combat stabilization and governance measures. Instead, a splendid little war has been waged on the cheap.

As matters now drift, the beneficiaries of this slow-motion, “degrade and ultimately destroy” operation will be Iran and its Syrian servant. Pulitzer Prize winner Roy Gutman, writing for The Daily Beast from Turkey, is being told by Syrian sources that the coalition’s militia “partner force” is avoiding door-to-door combat in Raqqa—a mission for which it is untrained and unsuited in any event—in favor of coalition airstrikes in densely populated neighborhoods. Even if ISIS fighters in Raqqa end up killed or captured, what’s next?

The harsh truth seems to be that the leisurely, under-resourced military pursuit of a genocidal and terrorist enemy has given the parties that incubated that enemy in the first place—the Assad regime and Iran—time (with critical Russian help) to secure Assad in western Syria and deploy Iranian-led foreign fighters to the east. If all goes well (by CENTCOM standards) the kidney (ISIS) will soon be removed. The dead patient (Syria) will be someone else’s problem, at least until ISIS 2.0 is midwifed by Iranian-Assad governance.

Reportedly there are some in the White House who do not agree with CENTCOM’s recent, public green light for Iran and the Assad regime to help themselves to whatever they want in eastern Syria provided they fight ISIS. In an administration conscious of and verbally indisposed toward Iran’s hegemonic behavior in the Arab world, presumably there are officials who will object to conferring beneficiary status on Tehran once the long, little war against ISIS concludes.

But what is to be done? Where are the forces that would resist the Lebanese, Iraqi, and Afghan gunmen being bused into eastern Syria by Iran? Short of the Turkish Army they do not exist. An Obama administration response to ISIS in Syria that was long on both rhetoric and strategy papers but fatally (and characteristically) short on timely action, has worked, over time, to secure the customary unintended negative effects. When Saudi Arabia, the United Arab Emirates, and Bahrain all offered ground forces to confront ISIS in eastern Syria, the American Defense Secretary looked for a place to hide. When Raqqa-based criminals planned and executed mass terror operations in Paris and Brussels, European leaders acted as if self-defense and armed retaliation were socially unacceptable. Sadly, the Trump administration did not see fit to reverse course in eastern Syria when it reviewed the “strategy” it had inherited. Time may now have run out.

That which passes for leadership in the West has contrived a problem in eastern Syria for which there may be no solution. “So what?” will be the reaction of many, in and out of government. Yet the expenditure of American treasure, along with the blood of others, will likely result in a Syria—east and west—dominated by Iran and doomed to state failure. A Syrian carcass on which extremists will feed indefinitely will not strike Iran, Assad, or even Russia as particularly problematical: they have been fine with ISIS in Syria for years and are ready only now to reap the reward of American-orchestrated policy failure. For the United States and its Western allies, however, letting the patient die in the single-minded pursuit of a kidney would have bad consequences for decades to come. It is a death, however, that may no longer be preventable.