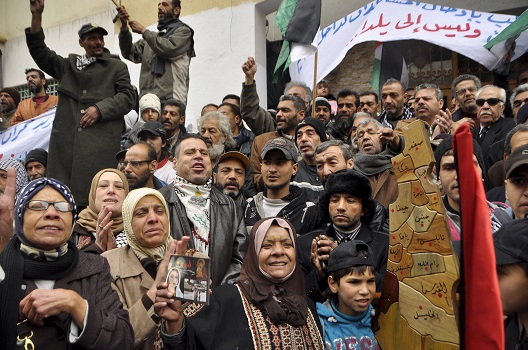 A recent article by Sulome Anderson on the presence of Hezbollah-trained Palestinian fighters inside Yarmouk camp, once Syria’s largest Palestinian community and its most culturally significant, evoked controversy when a pro-Hezbollah commentator called into question Anderson’s reporting: “Do [Anderson and her editors] believe that Hezbollah marks its vehicles…with the logo of a Syrian-Palestinian group? Additionally, since when do Hezbollah commanders wear caps with [Palestinian faction] Fatah al-Intafada’s logos on them?” Anderson has since published a blow-by-blow rebuttal.

The controversy raises questions regarding which groups are actually in and around Yarmouk, and presents an opportunity to investigate these pro-regime Palestinian factions and their respective futures and trajectories—questions more pertinent than ever given that the Syrian regime appears determined to clear the camp of jihadist groups. Yarmouk has seen the emergence of a range of pro-regime militias that may threaten its long-term stability.

By the time the regime carried out its infamous MiG strike on Yarmouk in December 2012, the camp’s trajectory towards conflict was already well underway. Following the first anti-regime protest inside Yarmouk, the Popular Front for the Liberation of Palestine-General Command (PFLP-GC) and regime-affiliated Palestinian figures began recruiting fighters and distributing weapons inside the camp. Meanwhile, Free Syrian Army (FSA) groups were trying to politick their way inside the camp. By the time the regime started bombarding suburbs adjacent to Yarmouk in mid-2012, the camp was already a refuge for hundreds of thousands of internally displaced persons (IDPs).

The day after the MiG, rebel groups entered Yarmouk, and since then the camp has seen the worst of the conflict. A total siege began in mid-2013 which led to the deaths of at least 180 civilians caused by starvation and lack of access to medical supplies. FSA, Jabhat al-Nusra and anti-regime Palestinian groups controlled much of the camp until an Islamic State (ISIS, ISIL, Daesh) offensive in April 2015 put the majority of Yarmouk and its closest southern suburb, Hajar as-Aswad, under ISIS control. Today pro-regime militias hold the northern limits of the camp whereas most of its interior is controlled by the Islamic State. Barely six thousand civilians remain inside.

Among the traditional Palestinian militias, well-established in Syria before 2011, the most influential include the PFLP-GC and Fatah al-Intifada. The Palestine Liberation Army (PLA), originally established during the 1960s as the military of the Palestine Liberation Organization (PLO), functions as an official section of the Syrian army, and descendants of 1948 refugees are required by law to serve. The PFLP-GC and Fatah al Intifada are non-PLO breakaway factions that benefited from Hafez al-Assad’s turn against Fatah and the PLO during the Lebanese Civil War. With longstanding ties to Damascus, their pro-regime credentials have rarely been in doubt; sometimes to the extent that rival factions, activists, and civilians question their “Palestinian-ness” inside Yarmouk as factions representing Palestinian rather than regime interests. Fatah, of the Palestinian Authority’s President Mahmoud Abbas (himself from Yarmouk), has had little serious political stake in Syria since long before 2011, whereas Hamas turned against Assad and joined the side of the rebels afterwards.

New Palestinian militias have also emerged. Yasser Qashlaq, a wealthy Syria-born Palestinian businessman and head of the Free Palestine Movement (FPM), was one of the regime allies to begin recruiting and arming men inside Yarmouk. One Yarmouk-born activist remembers Qashlaq’s emergence as a political presence in Yarmouk around 2003, when he presented himself as a resistance-friendly businessman selling oil to send the funds to support the Second Intifada. The FPM has since functioned as a pro-regime Palestinian community organization providing services and holding rallies, recruiting for militia activities, and a vehicle for Qashlaq’s own seemingly sizeable political ambitions.

In 2012, the FPM established its military wing, the Al-Aqsa Shield Forces, which has according to sources allegedly been active on Yarmouk front-lines for over a year—after the FPM paid Fatah al-Intifada. As a result, Al-Aqsa Shield man positions in what are essentially Fatah al-Intifada zones of north-east Yarmouk close to Palestine Street. Fatah al-Intifada is said to be low on resources and manpower, forcing it to recruit more from poorer Palestinian communities, like Khan Danoun. An informal power-sharing agreement like this one relieves pressure on Fatah al-Intifada’s fighters and organization while giving people like Qashlaq valuable political capital by posing as front-line defenders of the one-time “capital of the Palestinian diaspora.”

Other Palestinian-Syrian militias have developed into semi-official fighting forces alongside the Syrian army and key allies (Hezbollah and Russia) such as  Quwat al-Jalil, which emerged out of a political organization formed to coincide with the 2011 Nakba Day or May 15 protest when demonstrators stormed Syria’s border with the Israel-occupied Golan Heights. The group routinely uses classically Palestinian revolutionary/pan-Arabist rhetoric about the Right of Return and need for “resistance.” Quwat al-Jalil’s leader, Yarmouk-born Fadi Mallah, previously described the movement as “Syrians by belonging, Palestinians by nationality, and resisters by ideology and faith.” Since Quwat al-Jalil began military operations in Syria in 2012, the group has morphed into an influential Palestinian militia with ties to Hezbollah. The group is active outside Yarmouk and is known to be fighting alongside the Syrian army in the eastern desert and Deir Ezzor.

The Syrian regime appears more intent than ever to clear Yarmouk. In June 2017, Syria’s National Reconciliation Minister Ali Haidar held meetings with representatives from the PLO, PFLP, PFLP-GC, and other assorted community figures with ties to Yarmouk. Although this certainly wasn’t the first time there have been delegations about the fate of Yarmouk, Haidar’s involvement is new. This involvement suggests that discussions in regime circles about Yarmouk’s reconstruction and the return of its civilians now have key Syrian government officials behind them, rather than security officials from the army, mukhabaraat, or the Palestine Security Branch.

The meeting in June followed reports of a local truce between the Syrian regime and ISIS to evacuate ISIS fighters and their families to Deir Ezzor. There have also been evacuations of Hayat Tahrir al-Sham fighters since May as part of the ‘Four Towns’ agreement negotiated earlier this year. Dozens of HTS fighters, out of around two hundred, are thought to have left Yarmouk.

Pro-regime Palestinian factional politics has clearly experienced “militiafication” in a similar way to the Syrian regime itself. Relatives from the same family are said to fight for opposing groups on either side of Yarmouk’s front-lines. And while evacuations are usually presented by regime allies as the beginning of the end—with terrorists gone then reconstruction and returns can start—the post-2011 hodgepodge of militias now active in and around Yarmouk suggests otherwise. Palestinian-Syrian militiafication could present threats to the long-term stability of Yarmouk through bad blood between the PFLP-GC and newer militias—relations between Ahmad Jibril (PFLP-GC) and Qashlaq are also said to be poor—or between pro-regime and Hamas-affiliated fighters. It remains unclear if the regime will try to incorporate new militias once Yarmouk is “liberated.” With much of the civilian and anti-regime Palestinian-Syrian community now outside Syria, or besieged within it, the regime has helped create a new generation of pro-regime Palestinian community representatives—the difference with the pre-2011 period is that a larger, more diverse range of pro-regime Palestinian actors are now mobilized and armed.

Divided into territorial zones controlled by different factions, these divisions may survive in post-conflict Yarmouk in the form of zones of economic interests and local security administration. As has happened elsewhere in Syria, there will also be a rush to control—and then maintain—power, fields of influence, and political capital once the reconstruction of Palestinian camps begins.

The current balances of power will almost certainly slow the return of tens of thousands of Palestinian IDPs who were displaced from Yarmouk to neighboring areas of Damascus. Others may never return.

Image: Photos: Palestinian residents of the Yarmouk refugee camp shout slogans as they take part in a protest expressing their will to stay inside the camp and calling on the Palestine Liberation Organization, the United Nations and UNRWA to find a secure passage to enter humanitarian aid inside the camp April 12, 2015. Islamic State moved into Yarmouk last week. Aided by fighters from the al Qaeda-linked Nusra Front, it has seized large parts of the camp from other insurgents based there. Picture taken April 12, 2015. REUTERS/Moayad Zaghmout