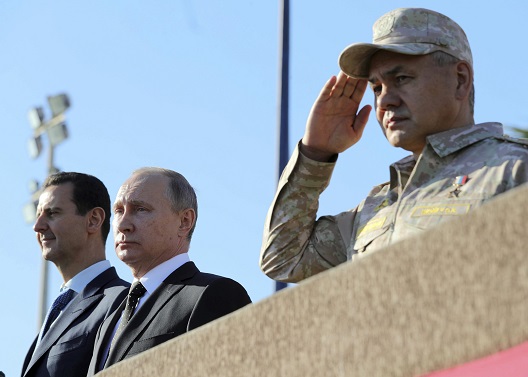 The quick visit of Russian President Vladimir Putin to Hmeimim airbase in Syria was all about Russian domestic politics. The first—and Putin hopes last—round of Russian presidential elections is scheduled for March 18, 2018. In his pre-Christmas proclamation of victory over “terrorists” and in preserving Syria as a “sovereign independent state,” Putin reiterated his central, Syria-related message to his nationalist domestic audience: Russia is back as a great power. In declaring to Russian pilots that “you are going home to your families, parents, wives, children and friends,” Putin sought to assure Russian voters that Syria would be no quagmire. Yet Putin’s second announcement of military withdrawal from Syria may, like the first (in March 2016), be more rhetorical than real.

The timing of Putin’s victory lap in Syria may have been influenced by a gratuitous gift emanating from American domestic politics: President Trump’s recognition of Jerusalem as the capital of Israel and his decision to move the American embassy accordingly. Putin’s move is like that of his American counterpart in the sense that it is driven domestically. But it differs in the positive regional impression—no matter the underlying objective truth—it lends to Russian power and influence. Indeed, Putin departed Syria to take his Potemkin great power act to Egypt.

The Trump administration’s characterization of Syria’s condition is accurate. By waging war mainly against civilians—with the enthusiastic support of Russia and Iran—Bashar al-Assad and his entourage have marginalized the state, destroyed those sectors of the economy not already criminalized, created the humanitarian catastrophe of the 21st century, hollowed out the country’s armed forces, rendered themselves utterly dependent on outsiders, and rendered themselves incapable of governing the ruins they have created. All accurate. But relevant?

The Obama administration tried to justify its calamitous decision to lift not a finger in response to Assad regime mass murder (or in support of its own moralistic rhetoric) by warning Mr. Putin in 2015 that he was wading into a Syrian quagmire: one that the United States had oh-so-judiciously avoided. Assad, according to the previous administration, had lost all legitimacy and should yield to full political transition irrespective of the military situation: he should read the text of the June 2012 Final Communique of the P-5 Action Group on Syria and pack his bags. No wonder an initially incredulous Vladimir Putin concluded that he could dance on the head of Washington, and not just in Syria.

The Trump administration has adopted much of its predecessor’s rhetoric about the inadmissibility of Assad regime atrocities against civilians, including calling on “the international community to vigorously support the UN-led Geneva process for a political resolution to the conflict that respects the will of the Syrian people.” Does it imagine that this kind of verbiage has any more effect on Assad, Putin, or Iranian Supreme Leader Khamenei coming from the State Department podium now than it did under Obama administration auspices?

With Russian airpower supplementing the fire and maneuver of Iranian-led militiamen, a man strongly in the running for arch war criminal of the 21st century—Bashar al-Assad—retains the honorific of President of the Syrian Arab Republic. That air power and those militiamen are not likely to be withdrawn anytime soon.

Putin’s false claim of having played a role in the military defeat of ISIS (ISIL, Daesh, Islamic State) is paired with recklessly aggressive Russian penetration of Syrian airspace east of the Euphrates River, where the American-led anti-ISIS coalition and its ground force partners have borne the burden of shutting down a false caliphate with which the Assad regime had enjoyed—with an occasional violent interruption—a live-and-let-live relationship. The foreign forces supporting Assad have concentrated nearly all their firepower on Syrian rebels opposing Assad: not a criminal pretending to be a caliph. And the prime Russian and Iranian targets of choice have been units supported by the United States: not those affiliated with al-Qaeda. Now Moscow feels emboldened to threaten directly those (including American pilots) who have actually fought against terrorists.

The days of Trump administration officials assuring outsiders that Russia and Iran will surely split over Syria and that Syria’s reconstruction needs will force Russia to move beyond Assad appear, mercifully, to be over. The administration’s appraisal of ground truth in Syria is sober and accurate. Indeed, this writer warned long ago that Russian actions east of the Euphrates and Russian attitudes toward the restoration of Assad’s ruinous governance in areas liberated from ISIS would tell Washington all it needs to know about the prospects for Russian cooperation in Syria. The returns are in, and key administration officials have no illusions about what they say.

Russia’s aim is to restore Assad rule to all of Syria and then blackmail Europe into cleaning up the mess, lest there be another migrant crisis. The Trump administration seeks to draw a line along the Euphrates River to block Iran and limit the extent of Tehran’s suzerainty in Syria. And it rejects reconstruction under the auspices of an entourage that will steal what it can. If aggressive Russian aerial penetration into eastern Syria is any indication, Vladimir Putin calculates the change of management in Washington has no impact on American actions in Syria. And lessons he draws from Syria he applies elsewhere. Such is the legacy left to the Trump administration by its predecessor.