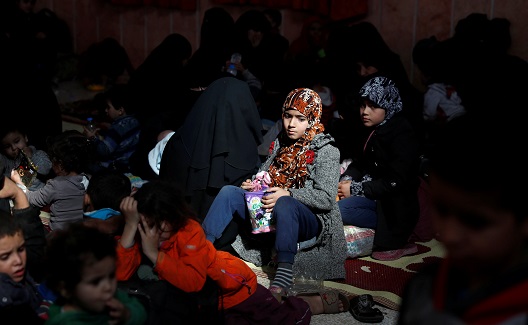 In a country that has seen war, destruction, and widespread war crimes committed by the Islamic State (ISIS, ISIL, Daesh), the city of Raqqa is witnessing relative calm and a new rebirth with the slow return of its people. Local and foreign institutions intervened to focus on reconstruction and dispatching task forces to remove land mines planted by ISIS. Hundreds of people, mostly women and children, have benefitted from these efforts.

In some neighborhoods of Raqqa, like al-Mishlab, al-Karama, al-Qutli, Tel Abyad, al-Idkhar, 23 February Street, al-Askan, and al-Qitar, a number of citizens have returned. Other neighbors still await the return of their residents. In al-Mishlab, a man in his sixties named Abu Muhammed is restoring the exterior walls of his home. He says, “We will all return as soon as they are finished removing the mines.”

Today, the city is patrolled by soldiers of the Syrian Democratic Forces (SDF) and the Raqqa City Council, supported by the United States and international allied forces. These two international parties provided the council with tools and equipment to rebuild the city for the thousands of people returning from camps, rural areas, and cities.

This is the current reality on the ground, yet politically, Raqqa represents a theater of the conflict, wherein a race to control the city is underway. The Syrian regime is attempting to reclaim control and accused the SDF of “treason” because of US support. At the same time, animosity towards the SDF by the Syrian opposition has become apparent in the declarations made by the councils representing Raqqa and supported by Turkey, as well as disagreements with Raqqa activists. The latter involves the fact that the SDF has fallen under the control of the Kurds, who are attempting, from the viewpoint of those within Raqqa, to create a federation in northern Syria as part of a potential Kurdish separatist plot.

Between June and October 2017, Raqqa witnessed nearly five months of fierce fighting between the SDF, supported by the international alliance, and ISIS, the terrorist organization that ravaged Syria, Iraq, and other countries. In a statement, the SDF announced that 655 of its own members had been killed, nearly 450 thousand citizens have fled, and nearly 80 percent of the city has been destroyed.

Raqqa was neither famous nor important before ISIS took control of it and claimed it as its capital. Before the Syrian Revolution, Raqqa was another of Syria’s eastern cities neglected by the government. Bashar al-Assad visited at the beginning of 2012 to rally supporters amidst the unrest taking place in Syria. In May 2013, the military opposition announced the liberation of Raqqa under the management of military forces and civil servants. This was, however, before its occupation by ISIS in 2014.

The Kurds reject the opposition’s accusation that they are carrying out a separatist plot within Raqqa. Salah Muslim, a media consultant for the coordination center with the international alliance, says that this accusation has been refuted: “Perhaps Raqqa will be included in the Federation of Northern Syria, but this hasn’t yet been decided.” Mustafa Abadi, another media consultant for the SDF’s media office, expects two different fates for Raqqa’s future: “It will either become an independent province within the Federation of Northern Syria, or it will be combined with Deir Ezzor into one province.” Abadi confirms that the government of Raqqa, which will manage the city’s affairs, will be formed to “include a legal and executive council and entities equal to ministries, as is the case in Manbij.”

According to Bashir al-Huweidi, a civil activist native to Raqqa, military intelligence forces run the city, and the claim that a civil administration governs Raqqa today is “only a façade.” He indicates that the established councils, like the Raqqa City Council and others, belong to an undemocratic central authority: “The SDF is also a military façade, all talk with no substance.” Al-Huweidi is not completely convinced of a Kurdish separatist plot in Raqqa. Muhammed Shelash, lawyer and political activist from Raqqa, mentions that the idea for secession could come and be reinforced by “separating Northern Raqqa administratively from the rest of the governorate.”

US Secretary of Defense, James Mattis, finally announced the possibility that Washington would send diplomats to SDF-controlled regions to work alongside military experts. This announcement, which came for the SDF’s sake and was reinforced by the Raqqa City Council, represents a message to the Russia-supported Syrian regime that it should not think of advancing on Raqqa.

Turkey is making an effort to stop SDF’s advance, and is trying to find a way to work with Russia and Iran to stop Kurdish progress in controlling the region; Turkey and others have accused the Syrian Kurdish party of following the Kurdistan Workers’ Party (PKK), the latter which Turkey and US consider a terrorist organization. Turkey also threatens to attack other Kurdish areas, such as Afrin. At the local level, the Syrian regime and opposition both reject the idea of a Kurdish-run region. The opposition hopes for a practical Turkish position in its favor against the Kurds, while the regime supports some clans in northeast Syria to confront the Kurds.

According to the SDF, there is no reasonable justification for Arab activists in Raqqa to fear. However, Muhammed Shelash explains that there is no trust in the military force, saying, “we have prior experience with armed forces that surrendered Raqqa to ISIS.” The reason for this lack of trust in the controlling forces goes back to “their unclear position in regards to the Syrian regime. Similarly, there aren’t any guarantees that the latter won’t return to Raqqa.”

According to Shelash, people’s fears increased when the image of Abdullah Öcalan (leader of the PKK) was raised in the city center during its liberation. However, Salah ad-Din Muslim, a media consultant for the coordination center with the international alliance, assures that Raqqa is run and will be run by its own people, and that the city’s future will be at the hands of those who “will lead Raqqa through a city council in coordination with the domestic security and anti-terrorism forces.” Muslim is not concerned after communicating with groups representing the Raqqa opposition abroad, such as in Turkey: “They have changed their reflexive views somewhat, but they still have one fear, which is Turkey.”

In terms of a best case scenario for Raqqa, Shelash believes that it will come through a gradual transition of power in Raqqa to its own citizens of different stripes “in a way that embodies true partnership between these groups.”

Reports seem to suggest that the citizens of Raqqa are agreement on their thoughts of the city. Rather, these disputes are reinforced by the lack of courage in approaching opportunities for dialogue and communication. Shelash believes that Raqqa needs consensus among all parties and groups so that the citizens may forget the Islamic State’s long reign. The people of Raqqa should meet together to discuss their governorate’s future which depends on their independence. However, he states, “Until now, this has been forbidden in Raqqa.” For his part, Bashir al-Huweidi, the political activist from Raqqa, believes that Raqqa must be run by its people, “which requires a good environment and time,” meaning that Raqqa now is at the hands of an emergency administration. Thus, Raqqa needs to be managed by forming local councils in which the people of Raqqa may participate to provide security, education, and health services to their city.

Raqqa will not experience stability without local consensus, accompanied by an international agreement to support and re-stabilize the city. This has begun through reconstruction efforts and the active role of civil society organizations, along with the formal position of the United States and the alliance, which believes in communication between contentious local parties. Finally, there must not be fear that the Syrian regime will return to power, nor fear of Turkish threats to the region, so that the people of Raqqa may bring their city back to life.