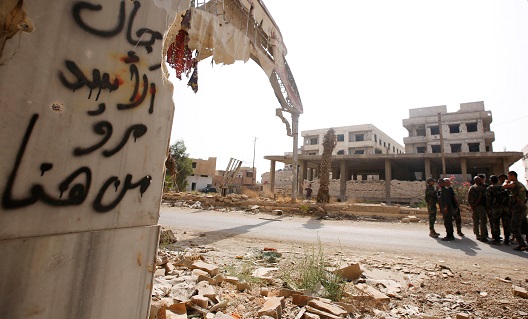 Photo: Syrian army soldiers stand at the entrance of the besieged Damascus suburb of Daraya, before the start of evacuation of residents and insurgents of Daraya, Syria August 26, 2016. The Arabic on the wall reads, "Assad's men passed from here". REUTERS/Omar Sanadiki

The passage of a new property law in April by the Syrian parliament grants the regime the power to reclaim and redevelop land across the country. Law No. 10—which could impact millions of displaced Syrians—was issued under the pretext of governmental efforts to counter terrorism and rezone illegal housing areas across Syria.

The overall stated purpose of Law 10 is to allow the government to reclaim private property, with the goal of reconstructing destroyed neighborhoods. The law also extends to illegal housing–a long standing problem the regime sought to rectify with various laws, both prior to and after the outbreak of war.

There are several notable issues with Law 10. First, it attempts to register land and property without proper documentation. In fact, much of the privately owned land and property in Syria was not officially registered because transactions were customary and informal. The regime attempted to start digitizing the land registry in 2010, but only for new land records.

Second, it gives the regime the right to seize the private property of Syrians who do not prove ownership—in person, or through relatives or an authorized representative—via the local councils within thirty days, now extended to one year, of notification by state authorities of the planned reconstruction.

And third, it puts jurisdiction under the local councils—rather than the central government—forcing them to decide on crucial development projects at the expense of ownership rights.

The roots of Syria’s redevelopment policy were planted long before the regime announced Law 10, dating as far back as 2006. It gathered steam in 2012 when the government issued Legislative Decree No. 66, authorizing the redevelopment of areas deemed to be the site of illegal settlements or slums in the city of Damascus. This resulted in the demolition of several residential neighborhoods—Kafr Sousa, Basatin al-Razi, Mezzeh—in the southwestern part of the Syrian capital, to be replaced by skyscrapers, hotels, and restaurants.

Human Rights Watch (HRW) interviewed residents that said government forces gave them little to no warning of the demolitions, and that they were never offered compensation. According to the HRW report, most of the demolitions took place in opposition strongholds, and not those loyal to the regime; despite illegal housing units built there as well.

While land and property records are important in establishing rights to return, a study by the Norwegian Refugee Council found that only 17 percent of displaced Syrians say they have paperwork proving ownership of their property in Syria. This lack of documents makes it difficult, if not impossible, to reclaim property.

Several reports indicate the regime also deliberately destroyed and falsified property records. According to the Syrian Human Rights Committee, an independent monitoring organization, regime forces bombed the land registry building in the center of Homs on July 1, 2013, despite its remote location, far from the battle zone. The fire destroyed much of the city’s property records. The regime also reportedly targeted registries in Zabadani, Daraya, and Qusyair—areas where protests first began against the regime  in 2011.

Analysts claim that Kafr Sousa and Mezzeh’s redevelopment was a pretext for demographic engineering: removing residents who had opposed the regime and rewarding Assad loyalists for their support. Bashar al-Assad denies these claims.

Political activist, Jamal Moaz, tells SyriaSource that Assad’s rush to control his opponents’ property is evidence of the regime’s attempt to complete a process of demographic change following the forced displacement of Syrians nationwide.

Reports emerged last year of engineered demographic swaps carried out by the regime after local Sunnis residents fled due to the war only to have Shia families from Iraq, Iran, and Lebanon relocate to Damascus and other areas.

Moaz claims this is an example of state wide policy mentioned by Bashar al-Assad in a 2015 speech stating that Syria is for those who defend the homeland; the regime instituted a law ratifying citizenship for those who ‘defend the Syrian state’ allowing them the ability to own land and property.

According to a report by the Independent International Commission on the Inquiry of the Syrian Arab Republic, “The pattern of evacuations…appears intended to engineer changes to the political demographic[s]…by redrawing and consolidating bases of political support.” The report states these practices, along with Law No. 10, indicate a wider plan to strip internally displaced people of property rights in order to enrich the regime and its allied militias.

According to pro-opposition news outlets, the regime continued this strategy of demographic engineering in 2014 in Homs. It prevented over 100,000 Baba Amr residents from returning to their homes; arguing that the area consisted of slum housing that needed to be demolished and rebuilt.

To stop the reclamation project and preserve Syrian property, a group of Syrian opposition lawyers in Turkey launched an electronic platform aimed at facilitating the recovery of housing and real estate in the interim.

Established in cooperation with The Day After organization, the project strives to ​​electronically authenticate confiscated Syrian property, preserve relevant documentation, and register complaints from owners whose property was looted during the war. They plan to submit these documents to the competent international bodies with the hopes of prosecuting the perpetrators.

Syrian rights activists describe the seizure of dissident property as one of the largest politically motivated robberies in modern history. Human rights lawyer, Syrian opposition member, and a member of the Syrian Lawyers’ Association in Turkey, Erwa al-Soussi, told SyriaSource that he believes Law 10 aims to exploit displaced landowners and prevent them from reclaiming their property.

“It is meant to create an obstacle for landowners by legally requiring them to appear before city planning committees to provide proof of ownership,” he said. Al-Soussi adds that towns like Daraya, Zabadani, and Eastern Ghouta, have all been abandoned. “No relatives of property owners live in these areas, so they cannot provide documents on behalf of property and land owners to prove ownership.”

Al-Soussi argues that by giving property owners the opportunity to entrust their relatives with verification, the regime is attempting to make the process appear legal. He says, “These laws can be applied only when there is safety, security, and stability, and when conditions enable all citizens to defend their rights.”