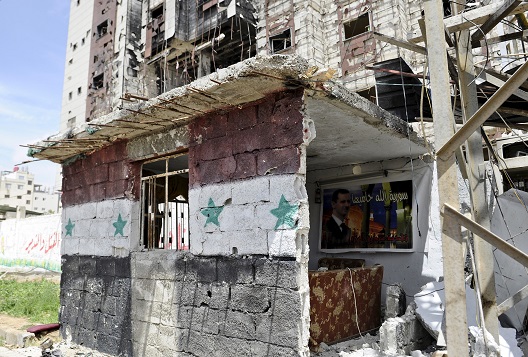 Ambassador Hof attended the Aspen Ministers Forum in Oslo, Norway, and on April 22 he opened the conference with a talk about Syria. The conference focused on the migrant crisis and featured the participation of about 20 former foreign ministers, including former Secretary of State Madeleine Albright.

My remarks this morning will focus on Syria. I’m aware that Syria does not represent the entirety of the migrant crisis. But it is, by far, the largest contributor. And my fear is that it will continue to be so for the indefinite future unless the root problem—chaos-inducing political illegitimacy—is successfully addressed by political transition. And any prospect of coming to a negotiated agreement on political transition will be minimal until Syrian civilians are removed from the bullseye of military operations.

In 2009 I joined the State Department as a deputy to Special Envoy for Middle East Peace George Mitchell. My job was to facilitate a peace agreement between Syria and Israel. By early March 2011 I was able to report to my government that a foundation for an eventual treaty of peace had been built. Within weeks I was seeing that foundation crumble. The decision by President Bashar al-Assad to employ lethal force against peaceful protesters raised fundamental questions both in Washington and Jerusalem about his governing legitimacy; about his ability to speak for 23 million Syrians on matters of war and peace. As the lethality became ubiquitous and the full force of Syria’s military, intelligence, and police establishments—in addition to unofficial auxiliaries—was brought to bear against protesters, the legitimacy question was answered in a way that made continued peace mediation impossible.

And now, five years later, we see a country in ruins with its prospects for recovery not good. I think we’ve become familiar with the grim numbers. As many as 400,000 dead: mostly civilians. Over 6 million outside the country. Another 7 million internally displaced. Tens of thousands maimed, terrorized, and traumatized. Tens of thousands more in mainly regime prisons suffering torture, starvation, and sexual abuse. Upwards of 1 million living under sieges, denied basic nutrition and medical care. An economy in ruins.

The overwhelming bulk of these shocking statistics are attributable to the Assad regime. To be sure, the regime is not alone when it comes to focusing firepower and abuse on civilians. Indeed, ISIS is perhaps in a class of its own in terms of cynical brutality that has sometimes achieved the status of genocide. Yet the reporting of the Independent International Commission of Inquiry to the Human Rights Council, the reporting of human rights NGOs, and the tons of written evidence smuggled out of Syria by courageous Syrian civil servants all make clear that when it comes to war crimes and crimes against humanity in Syria the Assad regime simply has no peer.

A few days ago we witnessed a particularly shocking and politically ill-timed example of what has happened all too often in Syria. Two towns in northwestern Syria beyond regime control—towns whose inhabitants had actually risen up against the Nusra Front—were savagely attacked by regime aircraft, which directed their fire on crowded vegetable markets. Dozens of people were killed, including children. Quite predictably the Syrian opposition suspended its participation in the Geneva talks.

Both as a government official and now an Atlantic Council Senior Fellow, I’ve argued that civilian protection is the sole portal to political progress in Syria. And yet civilians have, overwhelmingly, been the targets of choice in this savage war: a fact that is now impacting in various ways European and North American politics. In the Syrian context it is simply impossible to negotiate in good faith with an attitude of accommodation and an openness to compromise if one’s constituents are being massacred quite deliberately by the armed forces of one’s opposite number. I think that Secretary Kerry and Minister Lavrov, along with Special Envoy de Mistura, deserve great credit for having created a process in Geneva aimed at implementing the political transition mandate agreed by the P5 at Geneva in June 2012. But this process will go nowhere so long as civilians are on the bullseye.

For several weeks beginning in February things looked a bit hopeful. An announced cessation of hostilities reduced violence markedly. UN humanitarian assistance convoys began to move. The absolute precondition for useful talks—a modicum of civilian protection—appeared to be in reach. But now it has all but slipped away.

Violence reduction proved politically unpalatable for at least two parties: the Assad regime and the Nusra Front. Relative peace and quiet permitted Syrians in Idlib and Aleppo Provinces to resume peaceful, anti-regime and anti-Nusra Front demonstrations. Local civil society activists organized protests against the pre-Islamic barbarity of al-Qaeda even as they called on Assad to leave the country. Now that regime air assaults have targeted the towns best known for lively civil society and protest, the practical convergence of interests between the Nusra Front—an organization left out of the Geneva process—and the Assad regime—an entity that has no use for the Geneva process—has become clear. The people killed by the regime are people the Nusra Front wanted dead.

In addition to a rise of civilian-centric violence, the UN has been largely frustrated in its attempts to get humanitarian assistance to the Syrians needing it. Senior UN officials have spoken forcefully about the obstacles blocking the UN from doing its job. Again, the main—though not only—offender is the Assad regime. It has been slow to grant the required permissions and it has stripped convoys of surgical equipment and medicines. This is fully consistent with the strategy of collective punishment that has been in place for five years.

If I were to try to sum up, very succinctly, the key interests of the various parties to a conflict that has become much more than a Syrian civil war, I would do so as follows:

Again: civilians have borne the brunt of this multifaceted struggle for Syria. One of the results, according to the UNHCR, is nearly one million Syrian asylum applications in non-Turkish Europe. In eastern Syria the West—led by the US—has protected Kurdish civilians against ISIS. In western Syria—and I am aware of all the pros and cons of using limited military means to protect civilians—not one single Syrian inside Syria has been protected by the West from the mass homicide, collective punishment policy of the Assad regime. Not one. This is simply a fact. Clearly the West is not to blame for a humanitarian abomination that has wrecked a country, caused immeasurable pain and grief, swamped Syria’s neighbors, and roiled the politics of others. But a central conclusion is unavoidable: unless Syrian civilians are taken off the bullseye the country will continue to hemorrhage human beings for as far as the eye can see and negotiations aimed at producing a political solution can go nowhere. And without political progress a failing economy will produce increasing numbers of migrants even from areas not subject to barrel bombs and sieges.

Will Washington and its partners come up with a “Plan B” to complicate the ability of the Assad regime to massacre people at industrial levels? Will Moscow and or Tehran oblige their joint client to suspend attacks on civilian residential areas and negotiate seriously in Geneva? Civilian protection is the portal through which political progress in Syria is possible. If that portal is blocked, Syria’s future may feature an uneasy, informal partition between Assad, ISIS (or something worse), Syrian rebels, and Kurds. This will be the recipe for the continued emptying of a very high birth-rate country. This will be the recipe for Somalia in the Levant. Doing something about it at the source entails risk. Doing nothing has entailed risk whose consequences are now clear to all. The work of Assistant Secretary Anne Richard and her colleagues to deal with the worst of the consequences has been outstanding, and makes me proud as an American. Sadly, however, it is not enough.

Image: Photo: A picture of Syria's President Bashar al-Assad is seen inside a checkpoint at the site of a car bomb on the outskirts of the Sayeda Zeinab district south of Damascus, Syria, April 25, 2016. REUTERS/Omar Sanadiki