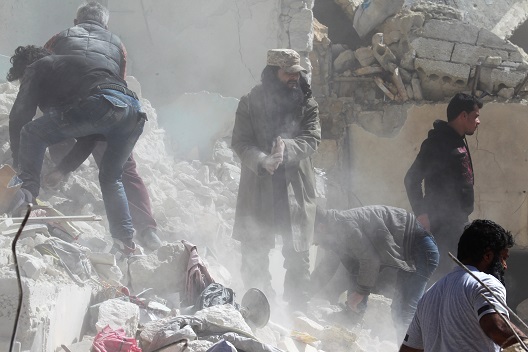 The worldwide security consequences of Syrian state terror have been clear to two American presidents. But what to do? How might the West defend Syrians and itself from this ongoing scourge?

In 2015, fifty-one State Department officers protested in writing what they considered to be the reckless passivity of the United States in the face of Assad regime mass murder, urging President Obama to consider retaliatory military strikes on Assad’s military tools of large-scale state terror. The president demurred. In the end, he bequeathed to his successor a record of having defended no Syrian civilians from the mass homicide campaign of their government; a record standing in sharp contrast with his effective defense of Syrian Kurds against ISIL (Islamic State, ISIS).

President Trump took a different approach, but limited his military responses to acts of state terror involving chemical warfare. Although Bashar al-Assad has a strong affection for the special, terror-inducing properties of chemical munitions, an announced policy of responding forcefully only to the use of chemical weapons runs the risk of suggesting to Assad there will be no response to mass murder conducted with conventional weaponry. Given that under one percent of Syrian civilian deaths have been chemical-related, this would be a profoundly dangerous impression to plant in the mind of a mass murderer. In 2019, the number of regime air assaults on civilian targets in Idlib province with non-chemical munitions suggest this is precisely the conclusion Assad has reached.

Although chemical warfare is deemed especially odious in international law, it has been a relatively minor feature of regime mass homicide in Syria. Defenseless Syrian civilians, ironically, have had no hope of Western protection when Assad has refrained from using his favorite murder weapon.

The United States under two administrations has, notwithstanding Kremlin accusations to the contrary, opposed violent regime change in Syria. It has instead sought numerous times to bind the UN Security Council to resolutions that would authorize forceful responses to Assad regime state terror; resolutions always vetoed by Russia and China. It has exerted (especially during the Obama administration) tireless efforts to jump-start a Syrian peace process.

But—except in two cases involving the regime’s use of chemical weapons against civilians—it has refrained from responding militarily to punish and dissuade the Assad regime from murdering, maiming, and terrorizing civilians on a massive scale; crimes creating constituencies and recruits for Islamist extremists while generating massive refugee flows.

As a practitioner and facilitator of terrorism—as someone whose behavior has devastated Syria and threatened the world—Bashar al-Assad certainly qualifies for violent removal from office. Yet it is not the policy of the United States that violent regime change in Syria be pursued. Political transition in Syria from corruptly violent family rule to a system reflecting inclusive legitimacy and rule of law should proceed through peaceful negotiations in accordance with the applicable United Nations Security Council resolutions. But these negotiations are not possible while the constituency of one negotiating party is subject to terror, murder, and flight. The challenge is not one of removing and replacing the Syrian government by force. Rather, it is one of getting that government out of the business of state terror and mass homicide.

Ideally, this objective would be accomplished diplomatically, without resort to military force. Strenuous efforts have been made over the years by the United States, Turkey, members of the Syrian opposition, and others to persuade Russia to stop its client from committing mass murder. These efforts—lacking nothing in terms of determination and endurance—have fallen short. Indeed, in Aleppo and Idlib province, Russian aircraft have participated in some of the worst abuses. Diplomacy should continue in the hope that Moscow will discover the downsides of supporting a Syrian ruling clique that is a recruiting gift that keeps on giving to Islamist extremists. But it may not be enough.

Is Assad militarily dissuadable in this matter? Does the Russian military presence in Syria since September 2015 render him immune from potentially significant military retaliation for mass atrocities?

Obviously, it does not. In the wake of American military responses to chemical attacks in 2017 and 2018, the regime now seems dissuaded from using Sarin gas, a particularly deadly compound. Clearly, the presence of the Russian military in Syria neither dissuaded US President Donald Trump from acting; nor did it protect the regime from the West’s response.

It may be deduced from these incidents that destroying Assad’s tools of mass terror in the wake of a regime mass casualty operation—regardless of the murder weapon employed—need not lead to either a conventional or nuclear confrontation with Moscow. Nothing—including doing nothing—is risk-free. But two sets of military strikes responding to Assad regime war crimes produced neither a regional armed confrontation with Russia (in which the United States would have prevailed quickly and decisively) nor a nuclear crisis.

The United States and its allies are capable militarily of making it hard for the Assad regime to conduct mass civilian casualty operations using aircraft, artillery, rockets, and missiles. They could do so with minimal casualties to friendly forces and Syrian civilians. They could, as they did in the two strikes responding to chemical attacks, emphasize the use of standoff weaponry and avoid producing Russian casualties.

Indeed, if the regime again uses chemical weaponry the Western response would be quick and deadly. This is already a given. The question is whether 3,000 people killed by barrel bomb shrapnel or field artillery shelling would prompt the same response as thirty killed by Sarin.

Clearly, it should. Eight-plus years of regime mass murder have emptied Syria of a more than a quarter of its pre-war population and displaced another quarter inside Syria. The crimes of Bashar al-Assad and his entourage have helped Islamist extremists recruit globally. With Russia and Iran propping up a violently kleptocratic family and entourage, well-schooled in the techniques of state terror, there is nothing to tempt large numbers of refugees to return home. On the contrary, with the Assad regime in place, Syria will hemorrhage human beings and host Islamist terrorists for as far as the eye can see.

Protecting Syrian civilians from acts of large-scale state terror should, therefore, be approached from the standpoint of Western self-defense. There is little or no political constituency in the West for violent regime change in Syria. There is no way to penetrate regime prisons to stop the torture, starvation, and rape. But stopping or slowing mass murder would make it harder for extremists to recruit. Reducing the terror could stem additional potential flows of refugees. Taking civilians off the bullseye could set the stage for the political process all parties—except the regime—claim they want. Indeed, there can be no peace talks or peace process while civilians are the targets of choice.

The Assad regime and its external supporters seem to understand that a chemical assault will draw an automatic and lethal Western response. Moscow should be advised by Washington that chemicals will no longer be the sole criterion for Western military retaliation for regime mass murder. The Kremlin should also be pressed to end its own targeting of hospitals and schools in Syria; after all, it professes to be hostile to Islamist extremism.

In the end, however, the West cannot subcontract its security to Russia. It will either defend Syrian civilians against the Assad regime’s mass homicide campaign or bear the consequences of a failed state shedding its population, hosting transnational terrorists, and inspiring Islamist extremist reactions around the world. This is what has been happening for over eight years. The time to stop it is now.