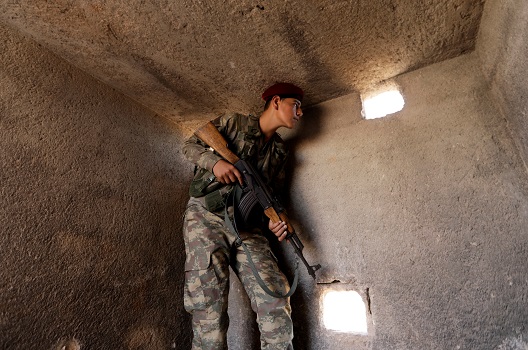 On October 10, 2017, al-Jabha al-Shamiya (the Levantine Front) handed over the Bab al-Salama checkpoint along the Turkish-Syrian border, to the Syrian interim government along with all its staff and financial resources. This was part of a bid to empower the interim administration, born out of the Syrian National Coalition of Syrian Revolution and Opposition Forces (Etilaf), and to strengthen its legitimacy in the liberated areas.

Al-Jabha al-Shamiya benefitted from the revenues it generated while it was in control of the border checkpoint. The group had previously set up a checkpoint in the town of al-Hamran, next to the Syrian Democratic Forces controlled city of Manbij, in order to clamp down on flourishing smuggling networks in the area. The checkpoint also served to facilitate the movement of goods to and from Manbij, as well as preventing the town from turning into a smugglers’ stronghold that could be become a threat. Al-Jabha al-Shamiya and the Sultan Murad Brigade shared revenue generated from the checkpoint.

The Sultan Murad Brigade’ commander Ahmed al-Uthman told Enab Baladi that armed factions in the northern Aleppo countryside are working to establish a unified army commanded by the chiefs of staff. A unified army would be able to run all the checkpoints through a single administration. His statement was in the context of the brigade’s response to the interim government’s call to establish a unified army, but he made it clear that he disagreed with the administration over who should be in charge with administering the checkpoint. The commander may have suggested that armed groups should run the checkpoints.

With his military background, al-Uthman believes military or armed groups should control major resources. Al-Uthman claimed his brigade had more goodwill with Turkey than both the interim government and al-Jabha al-Shamiya, despite differences over structure and roles. This statement fits with Turkish policy in the northern Aleppo countryside, where Ankara prefers to work with groups that implement what it decides, rather than being rivals or obstacles to its aims.

It will be hard to come to such an arrangement with the transitional government, which has some of the characteristics and structures of a state, or with al-Jabha al-Shamiya, a veteran rebel group with its own vision of how things should be administered. This is in contrast with the Sultan Murad Brigade, which has no specific vision but is made up mostly of Syrian Turkmen, meaning it has close social ties to Turkey and is more likely to be willing to integrate with the Turkish vision for the area than other groups in the area. This pushes it to feel it is the preferred party to take over the checkpoints and facilities, which would bring it into even closer direct contact with the Turkish side.

Al-Uthman’s statement expresses an implicit refusal and generally negative attitude towards handing over the checkpoint to a civilian administration, and a desire to place it under the control of a unified army that will include all factions and channel revenue directly to the army. The interim government is looking to set up offices in the northern countryside, and if it happened could limit the factions’ interference in non-military matters. It could also limit the armed groups ability to exploit resources from the checkpoint.

After al-Jabha al-Shamiya handed over control of the checkpoint to the transitional government, it had planned to do the same with the Hamdan checkpoint. A large proportion of the Sultan Murad Brigade revenues is drawn from that checkpoint and threatens their financial interests especially after the failed attempt by the Sultan Murad Brigade to seize and control the al-Ra’i checkpoint. The group later decided to attack al-Jabha al-Shamiya.

The attack started on October 15, 2017 with an assault on al-Jabha al-Shamiya’s base in al-Hamran; along the front lines in Manbij. Sultan Murad Brigade fighters cut the road between Azaz and Jarablus, and extended their assault across several areas of the countryside, where both factions had outposts. Both civilians and fighters, from both sides, were killed and wounded in the fighting. Several Sultan Murad Brigade fighters were also taken captive by al-Jabha al-Shamiya.

Leaked voice recordings from Sultan Murad Brigade commanders showed al-Jabha al-Shamiya’s intent to hand over the checkpoint points to the interim government posing a major problem. In one recording, a commander addressed his fighters and said he wanted to obliterate al-Jabha al-Shamiya. He called on Sultan Murad Brigade fighters to kill every last one of its rival’s fighters.

The clashes reached as far as the town of Turkmen Bareh, a Sultan Murad Brigade stronghold. Aleppo Today carried a statement by the head of the Shariah Council of Aleppo, Mohammad Yasser Abu Kesheh, saying that Sultan Murad Brigade fighters had fired on the town’s high school with students inside, and called on both sides to avoid hitting civilians and schools.

The defense ministry and the Syrian Islamic Council as well as local council and rebel figures, called on both sides to stop fighting and mediated a truce between them. Both al-Jabha al-Shamiya and Sultan Murad Brigade announced in separate statements that they had accepted the mediators’ calls.

But the Sultan Murad Brigade attack did not end, despite its announcement that it would accept mediation. The fighting continued in several areas and there were renewed calls by public figures, the defense ministry and the Syrian Islamic Council as well as independent rebel activists to end the fighting. The clashes and tensions carried on until October 16, 2017. A deal was reached under the protection of the transitional government the following day, after a meeting attended by both factions, the National Army Contingent (a Turkish training program), the chiefs of staff, rebel figures, and the Syrian Islamic Council. Here are some of the points that were agreed upon:

Mohammad Dirania is a Syrian writer and research from Darayya, specialized in the Syrian revolution and civil society. He has worked for three years with international organizations on empowering local society. He currently works for several Arab newspapers and think tanks.