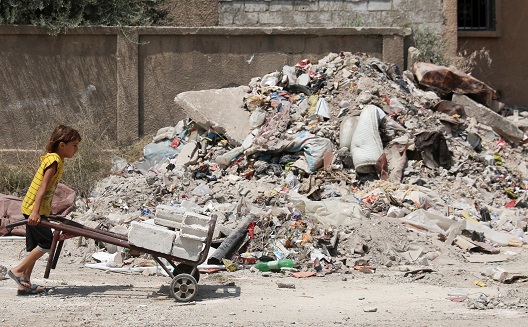 On August 17, Syrian officials oversaw the opening of the first Damascus International Exhibition since the start of the Syrian uprising. Reflecting the triumphalism now widely on display in Damascus, the exhibition—an international trade fair—has been heavily promoted by the Assad regime, presented as a symbol of its victory over the insurgency that began more than six years ago.

Even as military operations continue in areas still held by the opposition and ISIS, General Director of the Exhibition Fares al-Kartally told AFP that the regime wanted the fair “to signal the start of reconstruction.” Syria, official newspapers declared, is now “open for business.”

The prospect of lucrative reconstruction deals has triggered a deluge of interest from governments and firms looking to profit from Syria’s devastation. The regime’s closest allies, Russia and Iran, have been the most prominent beneficiaries of the Syria reconstruction gold rush, with China not far behind.

Almost two years ago, a Russian trade delegation announced in Damascus that “Russian companies would lead Syria’s postwar reconstruction.” That visit set the stage for contracts believed to be valued at $1 billion. More recently, Russian private security contractors have been “rewarded” for their role in combat operations with lucrative oil and gas contracts.

Iran, which has been a major financial backer of the regime, has inked new trade deals with Syria, and encouraged its citizens to go on a real estate spending spree, driving up housing prices in some areas under regime control. Iran also has the largest presence at the International Exhibition; more than 40 Iranian firms are taking part.

As for China, in early August of this year the Chinese government hosted the “First Trade Fair on Syrian Reconstruction Projects,” during which a Chinese-Arab business group announced a $2 billion commitment from the government for the construction of industrial parks in Syria.

Syria’s neighbors are also anxious for a slice of the reconstruction pie, and increasingly public about their ambitions. In late July, Amman hosted an international reconstruction conference, “Syria ReBuild 2017,” under the auspices of the Jordan Construction Contractors Association and the Ministry of Public Works. Lebanon is expanding Tripoli’s port to accommodate what officials forecast will be a massive demand for construction material—“an opportunity that [Lebanon] needs to take very seriously,” according to a former finance minister.

Even governments that sided with the opposition are angling for a piece of the action. During a visit by Turkey’s President Erdoğan to Saudi Arabia this February, Abdulrahman Abdullah Al Zamil, chairman of the Council of Saudi Chambers of Commerce, told a Turkish newspaper that “the war in Syria will not last more than a year, and Turkey and Saudi Arabia will be the re-constructors of Syria.”

While the regime cultivates a carefully curated image of Syria as an ever-more stable country on the path to recovery and peace, the reality is far different. The regime’s rush to reconstruction may be little more than a prelude to the renewal of violence. What we know about the conditions that promote the recurrence of violence after civil war gives rise to ominous warning signals about what is happening in the Syrian case.

Recent data indicate that since the start of this century, 90 percent of civil wars have occurred in countries that previously experienced mass violence. In a major study of the breakdown of peace after civil war, Charles Call identifies political exclusion as the most significant factor contributing to the recurrence of mass violence. “How, in the wake of bloody war,” Call asks, “can external actors help foster a society that can resolve its conflicts without recourse to mass violence?”

The answer lies in the principles and priorities that guide early recovery and post-conflict reconstruction. Not surprisingly, where these are designed to mitigate the grievances and governance failures that caused mass violence, prospects for recurrence go down. Where they are likely to amplify pre-war grievances and failures, prospects for recurrence are much higher. Everything we know about the Assad regime’s approach to reconstruction confirms that it will aggravate the factors that drove millions of Syrian citizens into the streets in 2011, and then into an armed uprising. Post-conflict reconstruction that does not address critical questions of institutional legitimacy and capacity, or provide for citizen security, justice, and political inclusion, is unlikely to be stable.

“For the Assad regime…reconstruction is not seen as a means for economic recovery and social repair, but as an opportunity for self-enrichment.”

For the Assad regime, however, reconstruction is not seen as a means for economic recovery and social repair, but as an opportunity for self-enrichment, a way to reward loyalists and punish opponents, and as central to its efforts to fix in place the social and demographic shifts caused by six years of violent conflict. Assad himself affirmed this intent in a speech he delivered to mark the inauguration of the Damascus Exhibition. Thanking Iran, Russia, and Hezbollah, Assad said that Syria had “lost its best youth and its infrastructure,” but had “won a healthier and more homogenous society.” The prominent Arab political analyst Azmi Bishara described Assad’s claim as “Hitlerian,” and as confirmation of the “genocidal” intent of the regime’s policies of displacement.

In his speech, Assad went on to condemn Turkey’s President Erdoğan as untrustworthy, a “political beggar,” and to reject Turkey as a partner in reconstruction. Defining the terms on which other countries might be offered a role in post-conflict recovery, Assad asserted:

“[T]here will be no security cooperation, no embassies, and no role for some countries that say they seek a solution—only after they sever their relations openly and unequivocally with terrorism…We will not allow enemies and adversaries,” he railed, “to achieve with politics what they failed to achieve with terrorism.”

Senior officials echoing Assad’s line have repeatedly affirmed the regime’s insistence that “only friends need apply.” The “priority of investments in Syria,” Prime Minister Khamis told a visiting Omani delegation earlier this month, “will be given to the businessmen from the friendly and brotherly countries which stood by Syria in its war against terrorism.”

The regime’s approach to reconstruction, and the eagerness of its allies and neighbors to participate in a process that will aggravate the causes of conflict, has important implications for the United States, the European Union, Japan, and international institutions like the World Bank, which are struggling with questions about whether and how to support Syria’s postconflict reconstruction. Unless external actors choose to link their participation in reconstruction to principles that will improve the prospects of durable peace, the regime’s probable military victory will likely be only round one in a much longer cycle of violent conflict.

In light of how the regime intends to pursue reconstruction, how should the West and other external actors respond? What kind of an approach to reconstruction might prevent a new wave of violence in the future?

To mitigate the conditions that led to civil war in Syria and reduce prospects for conflict to recur, reconstruction activities should be guided by a few, simple rules. These guidelines lead to a very different, more contained and less ambitious, conception of reconstruction than is envisioned in proposals for a Syria “Marshall Plan,” but are far more likely to produce positive results for Syrian citizens.

Here are the four most important of these rules:

1.     Bypass Assad. Every reconstruction dollar that touches the Assad regime is vulnerable to corruption, and will enrich regime cronies, enhance the regime’s legitimacy, and contribute to its dark vision of a “more homogenous” Syria. Cross-border channels for funding reconstruction that are transparent, accountable, and outside the regime’s control are the only way to avoid these effects. In the near term, this implies a focus on areas of the country that remain outside the regime’s direct control.

2.     Go local. Unless reconstruction funding is directed to and managed by local actors, projects will reflect the political aims and priorities of the Assad regime rather than communities. With the extensive connections that external actors have developed in communities across Syria since 2011, the capacity exists to design reconstruction as a bottom-up process that will enhance the autonomy and reliance of local actors, and reflect local needs.

3.     Go small. Notwithstanding the vast scale of Syria’s reconstruction needs, large-scale funding will foster corruption, inefficiency, and waste. A strategy focused on local reconstruction will be most effective if resources are scaled to local needs and local capacities. In non-regime-held areas, where destruction is less severe than in the major urban centers of Western Syria, small-scale reconstruction can have significant positive effects.

4.     Go slow. The urgency of reconstruction is real. Time and again, however, the imperative of moving quickly has led to poorly-designed and poorly implemented projects. Matching the pace of reconstruction support to a strategy anchored in the above rules will reduce the likelihood of flooding communities with resources they cannot effectively absorb. Western actors are already engaged in limited early recovery efforts in Syria, including in areas liberated from ISIS. With the military defeat of ISIS drawing closer, and de-escalation agreements in place in large swaths of the country, the shift from combat operations to reconstruction will accelerate. As criteria to guiding the design and implementation of reconstruction programs, these four simple rules give donors a pathway for supporting Syria’s post-war recovery that will not further empower and legitimate the Assad regime, or assist it in consolidating an exclusionary and repressive model of post-conflict governance.

While these rules are simple, they will not easily be accepted by major institutional actors, such as the U.N. and the World Bank, that most often work only with recognized governments. They are certain to be rejected by the Assad regime and its key allies.

These challenges, however, should not deter external actors from insisting that their participation in Syria’s reconstruction is contingent on whether it will mitigate rather than aggravate the conditions that caused Syria’s civil war in the first place. Following these rules would be a significant step in that direction.

Steven Heydemann is the Janet W. Ketcham Chair in Middle East Studies, Smith College, and a member of the Rafik Hariri Center’s advisory board.
This article was originally published on Brookings blog Markaz here.

Image: Photo: A child pushes a wheel cart with bricks in a rebel-held part of the southern city of Deraa, Syria August 20, 2017. REUTERS/Alaa al-Faqir