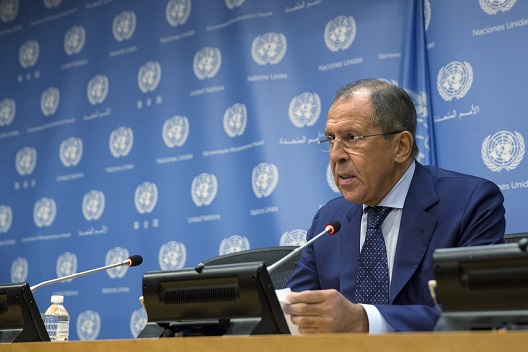 The Russian military carried out its first reported air strikes in Syria on September 30, targeting the northern suburbs of the strategically important city of Homs and the village of Lataminah further north. Russia insists that its mission in Syria is fighting the Islamic State (ISIS or ISIL), which the Russian Defense Ministry claimed was the target of the strikes. However, ISIS has no significant presence in Homs’ northern suburbs. The main insurgent groups operating near Homs are non-jihadist groups and the al-Qaeda-affiliate Nusra Front, while those hit in Lataminah belonged to a moderate rebel group affiliated with the US-backed Free Syrian Army.

The Russian air strikes in Syria indicate what many analysts and, presumably, some US officials had suspected: Russia is in Syria not to fight ISIS, but to protect the regime’s northwest heartland against a wide spectrum of insurgent groups operating nearby including nationalists, Islamists, and the Nusra Front. The United States initially welcomed the Russian mission provided it focused on fighting ISIS, but that is transparently untrue. There is now a clear mismatch of US and Russian interests—preserve or change Assad’s regime—and an equally complete imbalance in US and Russian commitment, with the former limiting itself to arming a small number of local insurgents and the latter committing its own troops in combat against forces aligned with the United States and its allies.

Several US officials have assured the media and critics that Russia has entered a quagmire and committed a strategic blunder in Syria. That will ultimately depend on how Russia wants to prosecute the war and whether the insurgency and its sponsors can resist effectively. However, Russian behavior thus far has been quite rational and even clever. Firstly, Russia quietly established its foothold in Syria, while insisting to the United States and its allies that it intended to fight their ISIS enemy. It did this amid frustrations with the flawed US-led effort against the group and by deploying its own troops in Syria—something no Western government had been ready to do.

Second, when it finally went on the offensive, Russia obviously reneged on its promise to fight ISIS only, yet was careful to include among its targets some areas held by the Nusra Front. Russia looks dishonest now (and Western politicians will surely denounce it), but how far can they go in condemning (to say nothing of actively opposing) air strikes on al-Qaeda? It is true that moderate rebels and several civilians were also killed, but that is not likely to elicit any more Western action than four years of identical regime behavior. Such things will not rule out international acquiescence to Russia’s role in Syria, whomever it targets.

Russia entered Syria with the stated goal of fighting terrorists, but it appears to define the term more broadly than does the United States. It has essentially declared war on the entire Syrian insurgency, including elements backed by the United States and its regional allies. Thus far, whatever Russian policy’s weaknesses, it is significantly more coherent than that of the United States and its allies: Defend the regime and defeat its opponents. Russia may be stepping into a quagmire, but thus far, its war against US and allied interests in Syria has been bold and sophisticated. It may not win the war for the Syrian regime, but it will most certainly prolong it, seriously harming both the insurgency and the parts of Syria it holds.