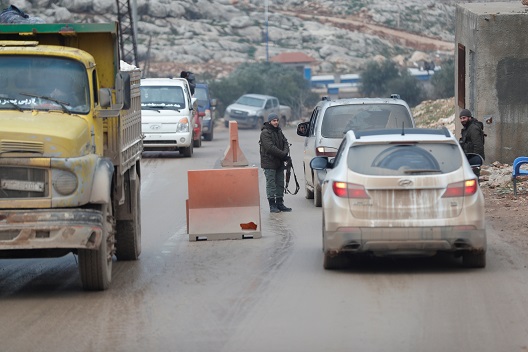 The rebel group Hay’at Tahrir al-Sham (HTS) regularly intervenes in Syrians’ public affairs in Idlib and imposes its authority on the education centers. Additionally, they also disrupt hospitals and other humanitarian facilities through the “Sawa’id al-Khair” or “Goodwill Corps,” affiliated with the morality police, that patrol public areas in HTS-held territory, known as the Hisba.

HTS established the Goodwill Corps last June to enforce its laws on the streets and to monitor people. The group recently arrested two hospital guards and bus drivers in a rural area of Idlib under the pretext of preventing the intermixing of men and women. According to local Syrian media, corps members patrolled hospitals in the city of Idlib last month and demanded that employees abide by the legal dress code.

During the past year, many battles have been fought between HTS and rival factions, such as Ahrar Al-Sham, after it took control over much of Idlib and its countryside. After July 2017, HTS shifted its effort from military to civilian control. It tries to oversee all aspects of life by enforcing its laws in the administration of: education, gender segregation, restrictions on women’s movement, and last but not least, intervening in humanitarian spaces. Through Sawa’id al-Khair, HTS places restrictions on Idlib residents, most of whom reject these rigid laws.

In the wake of such escalating restrictions, a Syrian NGO coalition consisting of seventeen organizations including the Syrian American Medical Association (SAMS), the Union of Medical Care and Relief Organizations, Shafak, Gharas, among others issued a statement rejecting interference by any party in the work of civil establishments:

“In addition to our concerns to continue to assist those in need of humanitarian service, we absolutely reject interference by any military or political entity in the work of humanitarian institutions and health facilities in Idlib province, and the adjacent areas that fall within the scope of our humanitarian work. We affirm our cooperation with the health directorates as recognized health authorities and we affirm our confidence in hospital administrations and health centers, of course, to provide the best possible health service to all those in need with impartiality and without prejudice or discrimination for any reason, while adhering to our ethical principles and universal humanity.”

The coalition stressed in its statement that any intervention in any health facility or humanitarian activity by any party would be considered a flagrant attack on the facility and the medical staff working in it, placing full responsibility for the cessation of service to civilians on the affiliated party. The statement confirmed the organizations’ adherence to its work and rejected any pressure to deviate from their mission.

So why does HTS interfere? Aside from its desire to impose its authority in civil and medical establishments and its claim to prevent mixing between the sexes, HTS also has economic objectives. Interference and domination over these facilities allows HTS to control their financing and expenses–estimated in the millions of dollars. The benefits are clear, particularly given HTS’s unenviable economic situation.

With developments in the circumstances of HTS and its shift away from fighting in Idlib and its suburbs, it may have placed control over civil institutions and the work of humanitarian organizations as a priority to finance their own projects and aspire to be the point of contact between financiers and other foundations. If HTS succeeds, it will effectively cut aid to ordinary citizens. Donors from Europe, the United States, and some Arab and regional countries consider the group a terrorist organization (despite changing its name from the al-Nusra Front to HTS). In the event it succeeds in exerting control and authority, the donor community would not recognize it as a legitimate broker or partner inside Syria, thereby depriving thousands of Idlib residents–and the internally displaced that they host from other Syrian areas–of much needed medical and nutritional support. HTS is aware of this, but sees no issue in exerting control in an indirect way. Doing so would allow it to impose taxes on organizations operating in the humanitarian sphere, thus benefiting from a new source of income.

HTS, is currently engaged in fierce battles with its main rival in the region the Syrian Islamic Liberation Front (consisting of two factions, Ahrar al-Sham and Noor al Din al-Zenki), and has lost most of its territory in western Aleppo countryside. As a result, HTS has reduced its presence in Idlib province, working to impose its authority over Idlib city for political reasons. The group wants to maintain its position in any forthcoming developments or agreements concerning the city, refusing to leave empty-handed even if it costs them strategic positions in north and northwestern Syria. Ultimately, HTS wants to keep its influence over Syrian political life, now and in the future.

Sawa’id Al-Khair thus has many tasks and long term goals to fulfill. However the group was forced to halt its work in recent days due to clashes between HTS and Idlib’s factions and villages that feel Sawa’id Al-Khair’s interference and bodies like it are dangerous for Syrian society and the work of civilian establishments.

The people of Idlib and its countryside now wait to see how developments and the current clashes unfold. It seems that Turkey and its Syrian allies have a strong desire to be rid of HTS to connect the northern Aleppo countryside with Idlib once the battle over Afrin ends. In the interim, however, it does not appear that the HTS threat will be easily removed. Nor is it possible to prevent the emergence of another Sawa’id Al-Khair affiliated with other factions. Therefore, it is necessary to work toward and emphasize the removal of de facto authorities in all its variations from the work of the civil establishments in Idlib and its villages. This effort will fall in greater part on the Syrian opposition and local civil movements–especially the local councils and civilian bodies–until the end of ongoing battles and the emergence of its implications. No one yet knows who will controls these areas or their orientation. The position of humanitarian organizations must remain firm and immutable, especially in the medical field, for the good of Syrians trapped in this terrible war.