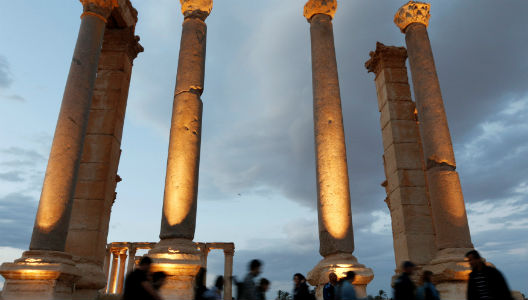 Photo: People visit the ruins of the historic city of Palmyra ahead of a musical event at its amphitheatre, Syria May 6, 2016. REUTERS/Omar Sanadiki

In late March 2016, forces fighting on behalf of the Syrian regime completed their takeover of the city of Palmyra, well known for its antiquities sites. While the battle showed the increasing reliance of the regime on its foreign backers, this military accomplishment was presented by the regime and its allies as proof of the regime’s importance in defeating the Islamic State (ISIS). The regime and its allies ‘liberating’ the city from ISIS garnered significant media attention worldwide due to the famous archeological sites around the city. The fate of the residents of the city, who still cannot return to their homes seven months after ‘liberation,’ has not garnered similar attention.

The city of Palmyra, where about 50,000 people lived before the start of the Syrian uprising, was captured by ISIS in a blitz attack in May 2015. Despite the small number of ISIS’ attacking force, Assad’s forces chose to flee instead of fight. Some of the regime’s soldiers who fled to the desert were captured by ISIS and executed in the ancient Roman amphitheater of Palmyra. During ISIS’ rule over the city, its fighters demolished some of the ancient sites, which they claimed were idolatrous.

The ‘liberation’ of Palmyra from the ‘barbarians’ who demolished it boosted the regime’s public relations line that presents the regime as secular and civilized in contrast with its opponents. This civility did not prevent regime militiamen participating in the Palmyra battle from posting photos of themselves beheading prisoners of war and torturing elderly civilians who did not escape in time as well as looting the ancient site themselves.

Iran and Russia were instrumental in helping regime forces recapture the city. Although only a small contingent of ISIS fighters was responsible for defending the city, two offensives by regime militias failed to capture Palmyra. Only the third offensive was successful due to the influx of large numbers of foreign Shia jihadists and Iranian Revolutionary Guards Corps fighters and the heavy and indiscriminate Russian bombings on the city that accompanied the successful offensive.

After the re-capture of the city by the regime, international media outlets covered the damage caused by ISIS to the archeological sites, some of them sending reporters to the field, under the tight supervision of Assad regime minders. Media attention did not focus on the large-scale damage to the city of Palmyra wrought on by Russia’s air raids and the systematic looting of homes there by regime forces. It was left to local activists who risked their lives to document how the ‘liberators’ of the city looted and torched homes of civilians.

After the capture of the city, the head of the Homs governorate announced that residents of the city could return soon, after the city is de-mined. Seven months have passed since and no more than 2,000 of the city’s residents have returned to it. Foreign Shia militiamen are still present in the city, occupying homes of some of the residents who left. The civilians who returned have ties to military or security forces—the males in their family have either served or currently serve in regime armed forces or intelligence services. Some residents who attempted to return to Palmyra without having such ties were jailed and accused of supporting ISIS.

Unable to return home, tens of thousands who have fled Palmyra currently live in Rukban camp, an IDP camp in the middle of the desert next to the border with Jordan. Jordan has shut down almost completely its border to refugees from Syria over a year ago and totally stopped regular entry of Syrians after an ISIS bombing of the border crossing in June 21. About 75,000 people live in the camp, most of them residents of Palmyra and surrounding villages. The living conditions in Rukban are miserable even compared to other IDP camps in Syria. People live in tents or mud huts with no running water, electricity or a proper sewage system. Aid reaches the camp only sporadically and the residents suffer from hunger, thirst and lack of proper medical treatment. Dozens have died due to these harsh conditions and were buried in makeshift grave sites near the camp.

The Assad regime consistently prevents the return of Syrians displaced from their homes after it re-captures cities or neighborhoods from rebels or ISIS. In towns and neighborhoods captured from rebels in Homs and around Damascus the regime prevented the return of the original inhabitants to ensure that rebellious communities do not re-establish themselves and also to punish the population for rebelling. In some cases, such as Palmyra, regime forces torched homes that weren’t destroyed by shelling, to prevent residents from returning. In other places, such as Zabadani, the occupying forces blew up the homes that survived the fighting.

The case of Palmyra illustrates a few points. First, while the Assad regime employed the ‘liberation’ of Palmyra to garner international attention for combatting the menace ISIS poses to the remnants of ancient civilizations, the regime itself did not protect those antiquities. Even before ISIS took over the city, regime fighters looted the antiquities and this looting persists to this day, despite Russian presence in Palmyra.  This demonstrates the inability of the regime and even its state backers to fully control the regime’s local fighters.

Second, many Syrians would choose life-threatening conditions instead of returning to live under Assad regime rule, which means incarceration and torture. Unwilling to live under the terror of the Assad regime or ISIS, thousands of Palmyra residents are stuck in no-man’s-land near the Jordanian border, awaiting salvation.

Lastly, since seizing the city from ISIS, the regime has continued its practice of demographic reengineering, which it has employed in other areas recaptured from rebels such as Homs, Zabadani, and parts of Damascus. The case of Palmyra demonstrates what an Assad takeover of additional parts of Syria means – such towns and cities will remain largely empty of their original inhabitants, and instead will be occupied the local militias or foreign militias loyal to Iran. This protects Assad from another popular uprising, but also ensures he will not be able to reunite and stabilize Syria on the basis of national identity good governance. The locals will not be able to return and continue to languish in IDP camps or survive as refugees in neighboring countries. Those calling for the West to back the regime in recapturing all of Syria should take what happened in Homs, Damascus, and Palmyra into account.

Elizabeth Tsurkov is a Research Fellow focusing on Syria at the Forum for Regional Thinking, an Israeli think-tank. Mohammad Hasan al-Homsi is an activist and journalist from Palmyra.