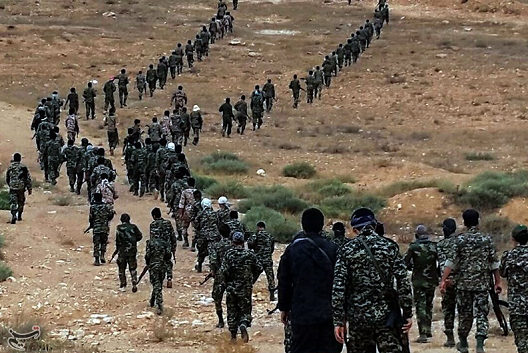 With at least 629 combat fatalities in Syria, Shia Afghan nationals suffered the second highest losses among foreign Shia fighters supporting the Syrian regime, second only to Lebanese fighters and surpassing Iranian fighters. But what motivates Shia Afghans to fight in distant Syria? How is their military performance in the war and what are the likely long term impacts of the emergence of the Shia Afghan militants?

All Shia Afghan nationals killed in combat in Syria, were organized in the so-called Fatemiyoun Division. According to Kayhan, a Farsi-language daily newspaper and unofficial mouthpiece of Supreme Leader Ali Khamenei, Tehran was not involved in establishing the Division. Allegedly, a certain Ali-Reza Tavassoli, also known as Abu Hamed, and twenty-five of his friends, volunteered to head to Syria to protect the Sayyida Zaynab Mosque in the suburbs of Damascus. Kayhan further claims Tavassoli managed to mobilize about five thousand Shia Afghan nationals who were already residents of Damascus.

Kayhan’s account, which the Islamic Republic authorities often repeat, is misleading: The Islamic Revolutionary Guards Corps (IRGC), rather than Tavassoli, established the Fatemiyoun Brigade (later Division) and Shia Afghan fighters were recruited as mercenaries among Afghan illegal immigrants in Iran, and not in Afghanistan or for that matter among alleged Afghan residents in Syria.

Tavassoli himself moved to Iran in 1984 to join the Abouzar Brigade, which was the Afghan branch of the IRGC Office of the Liberation Movements [Daftar-e Nehzatha-ye Rahaei-Bakhsh]—a precursor for the extraterritorial operations Quds Force (QF). After the end of the war with Iraq in 1988, Tavassoli spent some time in Afghanistan fighting against the Taliban in the 1990’s and was in Lebanon during the 2006 war. There is, however, no evidence of Tavassoli residing permanently in Afghanistan, let alone mobilizing Afghan nationals for the war effort in Syria.

Kayhan’s claims are also contradicted by hidden camera footage of an IRGC recruitment office in Mashhad in northeastern Iran, released by BBC Persian: Shia Afghan nationals did not leave their home country to fight in Syria. The IRGC recruited illegal Afghan immigrants in Iran in return for a permanent residence permit in Iran and a few hundred dollars monthly pay. In interviews with BBC Persian, defectors from the Fatemiyoun Division who fled to Turkey and Greece alongside Syrian refugees, further disclosed they received military training from the IRGC in Iran prior to their deployment in Syria by the civilian Iran registered Mahan Air.

Clearly, the Quds Force chose to revive the Iran-Iraq war era Abouzar Brigade under the new name of Fatemiyoun Brigade—later called the Fatemiyoun Division—to bolster their forces in Syria. Illegal Shia Afghan immigrants in Iran, in turn, join the Division in return for residence permit in Iran and a few hundred US dollars in monthly pay.

The military performance of the Fatemiyoun Division is hardly impressive. Although no information is publicly available about the size of the Fatemiyoun Division, the Afghan militia’s presence is not likely to be as large as Lebanese Hezbollah’s presence in Syria. Relatively high number of Shia Afghan combat fatalities may therefore indicate a high mortality rate. This is not surprising: Afghan fighters seem to be used as cannon fodder, and Afghan defectors disclose they only received four weeks of basic military training prior to their deployment in Syria.

Ever since the death of Reza Bakhshi, Tavassoli’s second in command on February 18, 2015, and Tavassoli himself in Deraa on February 28, 2015, the Division has been under direct Iranian command, which is reflected in the high number of Iranian mid-level commanders among the Fatemiyoun combat fatalities. The IRGC may be seeking to exercise more direct control over the group, and it may also reflect the IRGC’s dissatisfaction with the Division’s performance since Tavassoli’s death.

Despite the more direct IRGC control over the over the Fatemiyoun, their fatality rate has increased since the end of 2015. The increased Fatemiyoun losses since January 2017—simultaneous with a general decline in Shia foreign fighter combat fatalities—may further indicate the IRGC leadership’s perception of the Afghans as more expendable than the highly trained Iranian regulars and experienced Hezbollah fighters.

While expendable in Syria, the Afghan fighters are an important long term investment for Iran. Besides serving in Syria, Iran may be able to deploy them to other conflicts. Although Iran’s focus is mainly west of its borders these days, The IRGC leadership clearly expects Afghanistan to descend into greater chaos should NATO withdraw its forces from it. Fearing the rapid rise of the Taliban to fill the vacuum after Western withdrawal, Tehran is engaged in a dual effort of negotiations with the Taliban on the one hand, and using Syria as a training ground for a Shia Afghan militia on the other. This gives Tehran a standing army capable of deployment in Afghanistan at low cost to protect its interests.

Given that Iran is more focused on Iraq and Syria, and because Afghan fighters are not native Arabic speakers and Afghanistan does not share a border with the Arab countries, making it more difficult to transfer Afghan fighters to Arab countries and for them to integrate there, the role of Afghan fighters will remain limited to lower level positions in the Middle East.

Ali Alfoneh is a Senior Nonresident Fellow at the Atlantic Council.