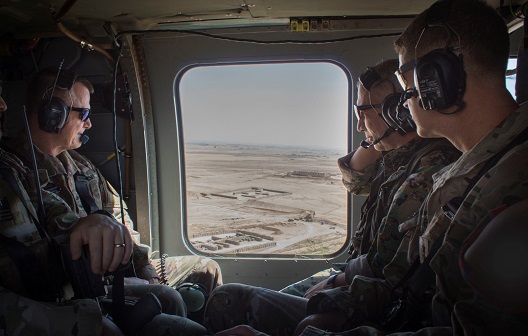 During the Obama administration, Syria was treated as a two-part puzzle divided by the Euphrates River. East of the Euphrates, the objective was to degrade and destroy ISIS (ISIL, Daesh, Islamic State). The strategy was to support the anti-ISIS combat operations of a Kurdish (eventually Kurdish-dominated) militia with weapons, ammunition, supplies, and advisors on the ground, and combat aircraft aloft. Although the Trump administration believes it can take credit for having accelerated the anti-ISIS campaign, the objective and strategy in the east have remained constant.

West of the Euphrates, the Obama administration pronounced itself in favor of political transition consistent with the June 30, 2012 Final Communique of the Action Group on Syria (featuring the Permanent Five members of the United Nations Security Council) and elaborated by United Nations Security Council Resolution 2254 (2015). The strategy boiled down to imploring Russia to deliver its Syrian client to United Nations-led talks in Geneva, and delivering him in a mood for dialogue, compromise, power-sharing, and ultimately transition via national elections to be held by mid-2016. The Trump administration is itself wedded to a Geneva political process consistent with Resolution 2254. Where it differs most significantly from its predecessor is the linkage it sees between the puzzle’s two parts—a linkage denied by the Obama administration.

Recognizing intellectually that Syria is a unitary problem rooted in the extremist-abetting criminality of the Assad regime is not new. Doing something about it is. Presidents Donald Trump and Barack Obama could, no doubt, have a very agreeable discussion about the fact that the Syrian client of Iran and Russia and his regime bear, according to Professor Marc Lynch, “full responsibility for the initiation of Syria’s apocalypse, and they should never be allowed rehabilitation into the international community.”  Neither Trump nor Obama would be inclined in the least to support President Jimmy Carter in his depressing call for the regime’s rehabilitation.

Indeed, President Obama would probably acknowledge that ISIS setting up shop in eastern Syria was a vacuum-filling exercise made possible by Assad’s illegitimacy and the regime’s decision to concentrate militarily on the civilian populations of western Syria. Obama, however, was hamstrung in his response to the mass slaughter and terrorization of civilians by the Assad regime.

He feared that push-back – the kinds of limited retaliatory responses to chemical warfare authorized by his successor in 2017 and 2018 – would alienate Iran (Assad’s greatest supporter) and scupper nuclear negotiations. Hence the operational fiction that Syria east of the Euphrates – the battle against ISIS – was taking place in a universe parallel to but separate from the Assad war on Syrian civilians west of the river. Reportedly, President Obama even assured Iran’s Supreme Leader that the two universes Syria policy of the United States would leave his client safe from any American military action: a priceless insurance policy for someone engaged in mass murder.

Unbound (to say the least) to the necessity of assuring Iran of Assad’s immunity and impunity, the Trump administration has ended the two universes approach to Syria. Defeating ISIS remains – as it was during the Obama administration – the top American objective in Syria. Yet the Trump administration has concluded, quite correctly, that the underlying cause of Islamist extremism in Syria – the Assad regime – must be addressed. Although ISIS per se is an Iraqi phenomenon that was imposed on eastern Syria, the combination of regime corruption, incompetence, and brutality, and its reliance on lawless, Iranian-led Shia militias for sustenance, makes the prospects good for the resurrection of Islamist extremists and transnational terrorists in ungoverned parts of Syria. And the Assad regime has a long track record demonstrating its inability to govern.

Like its predecessor, the Trump administration does not aim for violent regime change in Syria. Rather it is prepared to oversee the stabilization of territory liberated from ISIS, keeping undisciplined regime forces and Iranian-led militiamen on the west side of the Euphrates. For the sake of permanently suppressing Islamist extremism of the Sunni variety in Syria, it wants Islamist extremists of the Shia persuasion removed from the country. This will be problematical. Iran’s current political elite – all of it – is united on the proposition that Assad must be sustained to solidify Iran’s position in the Arab world and to preserve and protect the power of Lebanon’s Hezbollah.

The administration’s “theory of the case” seems to be that Assad has not won; that a significant part of the country is beyond his control; that ceasefire lines are hardening; and that a political process – starting with a “constitutional committee” and ultimately implementing Resolution 2254 – can soon commence. A political process would, according to this theory, make it difficult for the regime and its allies to try to alter ceasefire lines through force. Ultimately a political process could lead to a transitional governing body that would, consistent with Syrian nationalism, ask the Iranians and their hired foreign fighters to leave. There appears to be no administration objection to an ongoing cooperative relationship between Damascus and Moscow.

Linking the two parts of the Syrian puzzle is long overdue. There is, however, no evidence that the criminal enterprise purporting to govern Syria has any appetite for compromise or power-sharing. If it had such an appetite, it would signal its interest by releasing detainees still alive and accounting in full for those it has murdered.

Neither is there evidence that Russia has the desire or ability to compel its client to do anything. And Iran – including so-called “moderates” – has no interest in letting go of its Syrian province. Even if the best were to occur – a genuine negotiations process producing a consensus for state-preserving political transition – the destabilizing downside of Resolution 2254 must be avoided. If one were to design a scenario for plunging Syria back into country-wide chaos, one would mandate near-term national elections. Elections must be preceded by rule of law, return of refugees, and the substantial beginnings of reconciliation and reconstruction. These things can be overseen by a neutral transitional governing body. Regional states that have deepened Syria’s misery immeasurably and supported Assad’s survival strategy by polluting the opposition with sectarian brigands can put their resources to good use for a change by supporting a Syrian nationalist political transition.

For the near-term the prospects for the success of the Trump administration Syria strategy depend on effectively stabilizing eastern Syria, supporting Turkey’s stabilization efforts in Idlib Province, and dissuading the Assad regime from resuming mass civilian slaughter: whether the regime employs chemicals or other weapons of mass terror. And the administration would be well-advised to do something avoided entirely by its predecessor: identify Syrians with whom to work, especially in the east. Helping the Kurds achieve effective local governance in predominantly Kurdish areas is essential. Relying on them to oversee and secure stabilization efforts in overwhelmingly Arab areas is asking for trouble.

Uniting the two parts of the Syrian puzzle is a major accomplishment. Implementing a strategy to address the underlying cause of Syria’s misery and the instability it has fostered in the neighborhood and beyond will take patience, endurance, and sustained intellectual horsepower. Unless Syrians are enlisted in the effort, the betting here is that Iran will outlast the United States in Syria. And if it does so, it will breathe new life into a form of Islamist extremism that differs only stylistically from its own.