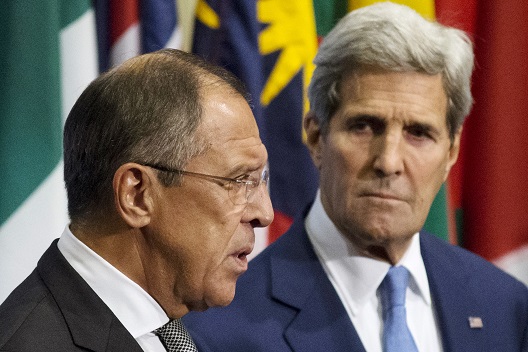 Russian Foreign Minister Sergei Lavrov and US Secretary of State John Kerry speak to the media regarding the current situation in Syria, at the UN headquarters in New York, September 30, 2015. (Reuters)

Four years of failed US policy toward Syria have produced alarming results that transcend the Levant. Having carefully gauged the gap between Obama administration rhetoric and action, Russian President Vladimir Putin has elected to intervene militarily to help the Assad regime defeat its non-Islamic State (ISIS or ISIL) enemies. He is doing so in the belief that the US response will essentially be one of bemoaning the supposedly big mistake he is making. Like his predecessor over fifty years ago, he senses weakness on the part of a US president. Like his predecessor he risks discovering that trifling with the United States is not a healthy pursuit. But such a risk entails dangers for all concerned.

Missiles in Cuba are not the same thing as Russian fighter-bombers assaulting non-ISIL enemies of the Assad regime. The Russian air assaults, however, signal Moscow’s deep contempt for Washington and a careful calculation that the Obama administration will do nothing substantial to counter them. To the extent that the Obama administration still believes that what happens in Syria stays in Syria, it is seriously mistaken.

Russia’s first set of air strikes belies Moscow’s claim that it is intervening in Syria to fight ISIL. ISIL is not the immediate enemy of Moscow’s client, Bashar al-Assad. On the contrary, ISIL is Assad’s ticket back to polite society. Thus far, Russian fighter-bombers are focusing on Assad’s real enemies: a mixture that conveniently includes the al-Qaeda-affiliated Nusra Front. The Russian strategy may well to be one of hitting areas where Nusra is either present or nearby, counting on the inability of Washington to object to a strike on al-Qaeda. Yet initial reports indicate that nationalist units containing personnel trained and equipped by the United States over the past few years were hit—and hit hard. Representing as they do majority sentiment in Syria for an inclusive, non-Assad Syria, they top the elimination list for Russia, Iran, and the regime.

Moscow has done its homework. No doubt, it has taken into account the failure of a half-hearted train-and-equip program. No doubt, it has taken into account the past dismissive words of President Barack Obama with respect to Syrian nationalist rebels. No doubt, it read with interest the recent words of an ex-senior US official conflating Assad’s armed opposition with ISIL and the Nusra Front. Russia’s actions may be cynical, bloody minded, and ultimately—depending on the response of the West—futile and counterproductive. But they are by no means irrational or disconnected from reality.

The situation in which the West now finds itself in Syria is the consequence of rhetoric outrunning action for more than four years. The icing on this empty cake was a train-and-equip program that sought to recruit anti-Assad rebels to a one-way anti-ISIL mission: a Washington bright idea utterly disconnected from the ground reality of Syria. A handful of personnel trained in Turkey was dispatched into an unsecured sector of Syria where—surprise, surprise—it disappeared. If Vladimir Putin watched all of this unfold with a mixture of humor and amazement, who could blame him?

What then is to be done?

The challenge presented by Moscow transcends Syria. As was the case in Ukraine, Mr. Putin has assessed the West and found it lacking both in options and in resolve. As sincerely as administration officials believe that Russia is making a big mistake in Syria—as it supposedly did in Ukraine—such chatter should cease. It merely encourages Putin to plunge forward: hardly a recipe for stable relations between Washington and Moscow.

Given the transcendent nature of the crisis, politics-as-usual should be suspended in Washington, at least with respect to Syria. The executive and legislative branches of government should acknowledge that Russia is risking a profound threat to the peace and should suspend intramural finger pointing. When John F. Kennedy took responsibility as the principal officer of government for the Bay of Pigs fiasco in 1961, Republicans in Congress, with rare exception, rallied to the defense of the home team. Congress did not exactly distinguish itself in the summer of 2013 when President Obama briefly considered a military response to a particularly deadly Assad regime chemical attack. It can make amends now by suspending the attacks and consulting closely with the White House on next steps.

Options available to the administration are not attractive. It can choose to believe its own rhetoric about Russia’s big mistake and stand aside as Moscow works with the regime (and Iran) to create the dream scenario: the Barrel Bomber and “caliph” Baghdadi as the last two political figures standing in Syria. The objective of the unholy trinity is clear: force the United States into an alliance with Assad on the grounds that (a) there is no one else other than ISIL, and (b) ISIL is worse than Assad. This scenario represents the diplomatic brass ring for Putin: the utter humiliation of the United States and its president.

One would hope—certainly without assuming anything—that Washington has been pressing Moscow and Tehran to get their client out of the collective punishment and mass homicide business. Washington must redouble these efforts, as Assad’s atrocities are central to the ISIL-recruitment game plan. At long last, the administration must seriously consider limited military countermeasures to stop the barrel bombing. This course may well bring it into a collision with Russia. Clearly, there is a disparity between how Moscow and Washington weigh the importance of Syria in the greater scheme of things—a disparity working entirely to the advantage of Moscow. The administration must now weigh not only the salutary effects of Assad atrocities on ISIL, but the manner in which adversaries and allies alike around the world view US resolve.

Clearly, American-Turkish relations are an important factor and Turkish domestic politics are not necessarily conducive to effective joint action—no doubt another facet of Putin’s calculation. However, there is a crying need for a militarily protected zone in which Assad, ISIL, and Nusra can be excluded so that non-Assad governance can take root and an all-Syrian national stabilization force can be built. The ideal protected zone would be the 60 percent of Syria from which ISIL could be routed by a combination of Turkish (and other regional) ground forces and coalition air assets. One can be excused for expressing doubt that talks centering on such an operation have even been mooted. At the very least, converting the “ISIL-free zone” of northern Syria into something useful should receive high priority consideration.

It is understandable that President Obama has wanted the Syrian chalice to pass his lips. It has not, however, passed. As Syrian refugees now flood into Western Europe while Russia seeks to execute a diplomatic and military coup, he must face the crisis free of illusions and wishful thinking. Congress can and should help him. Yes, mistakes have been made and options narrowed. But as bad as things are, they can get worse. This is a crisis where Americans and their allies should pull together to save Syrian lives and prevent Russia, Iran, and the Assad regime from doing their worst.