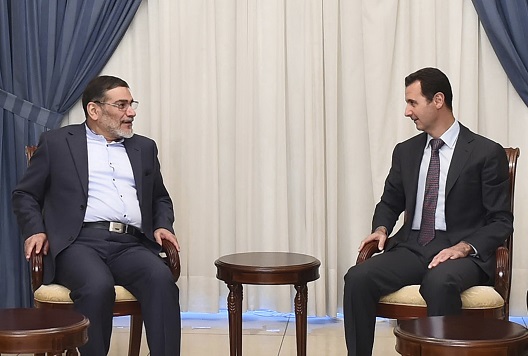 Last week the US Central Command (CENTCOM) spokesman for the anti-ISIS (ISIL, Daesh, Islamic State) coalition announced what seemed to be a major clarification of American policy in Syria. Referring to a Syrian town on the Iraqi border, Colonel Ryan Dillon said the following: “If they [Assad regime forces] want to fight ISIS in Abu Kamal and they have the capacity to do so, then that would be welcomed. We as a coalition are not in the land-grab business. We are in the killing-ISIS business. That is what we want to do, and if the Syrian regime wants to do that and they’re going to put forth a concerted effort and show that they are doing just that in Abu Kamal or Deir el-Zour or elsewhere, that means that we don’t have to do that in those places.”

It is difficult to understate the importance of Colonel Dillon’s words. Iran and its client regime have been conditionally invited to take over whatever parts of eastern Syria they can grab.

CENTCOM knows that the “Syrian regime” presence in eastern Syria is largely in the form of Iranian-led militiamen from Lebanon, Iraq, and Afghanistan. CENTCOM is likewise cognizant of the role the Assad regime has played in midwifing and sustaining ISIS as a symbolic enemy while trying, with Russian and Iranian help, to crush a Syrian uprising against its corrupt, incompetent, and brutal rule. And CENTCOM will not dispute the May 19, 2017 words of State Department Special Envoy Brett McGurk, characterizing what he had heard from Syrians emerging from the ISIS nightmare: “unanimously nobody wants the Syrian regime to come back, regime symbols, regime military forces.”

The view of the Tampa-based CENTCOM, however, is that a regime whose misrule has brought Syria to the brink of state failure—a carcass on which extremists have feasted—is welcome to reestablish itself in eastern Syria provided it makes a “concerted effort” against ISIS. Tampa’s view of Western equities in Syria comes down very specifically to the neutralization of a criminal band consisting in large measure of Iraqi Baathists and violent, lost souls from around the Sunni Muslim world. And the neutralization itself seems to boil down to Raqqa: the ISIS-proclaimed “capital” of the “caliphate.” In Tampa’s view, it is all about killing ISIS in Raqqa. Creating conditions that would keep it dead? That, presumably, would be someone else’s job.

Narrowing the nature of the mission is an understandable instinct for a military command. Still, CENTCOM professionals are far from ignorant of the results that flowed from the absence of post-combat stabilization planning in Iraq in 2003 and Libya in 2011. They seem to think, however, that eastern Syria in 2017 is different: that American military advisors are merely assisting “partners” – the Kurdish-led “Syrian Democratic Forces” (SDF) in a ground war against ISIS, and that responsibility for post-combat governance rests with the SDF. Or, perhaps because an overwhelmingly Arab Sunni Muslim eastern Syria is not governable by Kurds and their Arab auxiliaries, the Assad regime and Iran can have it all. Work with the Syrian opposition and help to establish sustainable, non-Assad governance in eastern Syria to keep terrorists out and facilitate peace talks? “Not our job,” per CENTCOM.

Indeed, sealing the victory over ISIS in Syria appears to be no one’s job. The Trump administration, like its predecessor, recognizes the Assad regime for what it is: an incubator for terrorism, extremism, and regional instability with a long, toxic reach into Europe. But, like its predecessor, it chose to follow the lead of Tampa in pursuing ISIS with a Kurdish-led militia instead of a professional, American-led, ground force coalition of the willing. Unless it enjoys a large measure of good luck, the SDF militia will take Raqqa with great difficulty and then will find it hard to take the real prize of eastern Syria: Deir Ezzor. CENTCOM apparently would just as soon leave the area’s major city and its nearby oil fields to Assad and his Iranian supporters.

A ground campaign against ISIS spearheaded by professionals could have long ago cleared eastern Syria and facilitated the rise in liberated territories of a Syrian alternative to Assad. The decision to rely instead on a Kurdish-dominated militia—one willing to collaborate if necessary with the regime to defy a NATO ally (Turkey) and establish an autonomous zone for itself—has extended the life of an armed gang for two years or more. That extension has enabled ISIS to plan and execute mass terror operations in Turkey and Western Europe. And now it is facilitating the ability of Iran and Assad to fill the vacuum once ISIS is gone. Is the United States “in the killing-ISIS business” for the benefit of Iran and its client?

The Trump administration correctly views Iranian domination of Syria—undertaken to secure and reinforce Hezbollah in Lebanon—as contrary to American interests. Yet Tampa articulates a policy that seems to be fully at peace with Iran and Assad dominating eastern Syria, provided they refrain from attacking American-supported, anti-ISIS forces, and provided they make a “concerted effort” against ISIS in Syria. Is it possible that Iranian and regime threats to those forces over the past few weeks have achieved their desired effects?

If the CENTCOM approach is good enough for Washington, it will be good news indeed in Tehran and Damascus, to say nothing of Moscow. An Obama administration Syria policy rooted in reassuring Iran about the untouchability of its Syrian client will have been embraced, executed, and completed by its successor. In its agonizing, slow-motion campaign against ISIS in Syria, the United States will, in the end, have made the whole country safe for Assad, for Iran, and for whatever forms of resistance arise in response to the triumph of misrule, collective punishment, and humanitarian abomination. For an administration rhetorically committed to pushing back against Iran’s regional expansion, it would be a remarkable reversal and a precipitous climb-down.