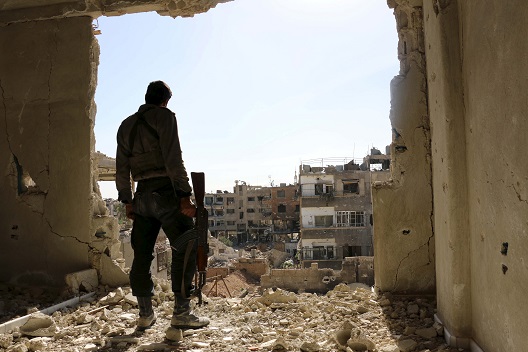 A rebel fighter stands on a damaged building near the frontline during what the rebel fighters called a battle to unite rebel factions against forces loyal to Syria's President Bashar al-Assad in Jobar, a suburb of Damascus April 21, 2015. (Reuters)

In the wake of releasing the report Setting the Stage for Peace in Syria: The Case for a Syrian National Stabilization Force, several pertinent (and tough) questions have been posed to one of the authors by Congressional staffers and others. This may well be the first of several postings aimed at sharing these questions and answers.

Question: The report posits initial planning for a force of 50,000 personnel organized into three robustly armed and equipped motorized infantry divisions. How would a force this size—or even larger—be sustained over time?

Answer: On page 39 of the report, key aspects for the sustainment of the Syrian National Stabilization Force (SNSF) are listed: pay for service members and their families; recruitment and replacement; training; resupply; and personnel issues. To quote from the report, “these sustainment operations would, for an indefinite period of time, be rendered by non-Syrian allies of the SNSF. As a combat-heavy SNSF makes progress in stabilizing Syria, all of these functions could be gradually transferred to the force or to a ministry of defense.” The report’s authors firmly believe that the SNSF would not, under any circumstances, become the exclusive or even principal responsibility of the US taxpayer. Provided this monumentally upgraded version of train-and-equip is embedded in a credible strategy aimed at moving Syria beyond the Islamic State (ISIS or ISIL) and Assad, the prospects for substantial burden-share are, in the views of the co-authors, excellent; perhaps better than excellent.

Question: Who would command such a force?

Answer: The authors anticipate that by the time the SNSF is fully formed—within two to three years—there would be a Syrian national command authority to which the SNSF would be subordinated. As Section 3 of the report explains, the current state of an exiled Syrian opposition makes the instant creation of such a national command authority impossible. Indeed, the co-authors believe that the fact of exile itself is a key cause and explanation for the dysfunction that makes Syrian command of the train-and-equip effort—either in its current anemic form or in the robust form of the SNSF—problematic. Indeed, as the discussion on page 32 of the report indicates, it is not clear how the command function has been defined by the train-and-equip initiative as it currently exists. In the words of co-author Jeff White, the small force about to be built “will have to be controlled and will perhaps be integrated with other operations in Syria and possibly Iraq. Ideally, this will all unfold in conjunction with US-led coalition interests.” Yet even for train-and-equip in its current form to do anything of value, it will require Syrian counsel and input. Hence the recommendation that an informal Syrian Advisory Task Force be formed to assist those organizing the force: whether it be that which is envisioned by train-and-equip, or something larger that can make a difference militarily and diplomatically.

Question: Where would one find 50,000 Syrian recruits who believe in political moderation and yet are willing to die?

Answer: There are really two questions here: are there 50,000 “warm bodies” to be found for duty in the SNSF; and are people not motivated by the basest of sectarian instincts as dedicated (to the point of self-sacrifice) to mission accomplishment as the disturbed, damaged, and deranged individuals to whom ISIL reaches out in Sunni Muslim communities around the globe?

The authors do not assume (page 35 of the report) that there are “as of early 2015, enough potential recruits from which to select fifty thousand. [They do], however, assume that the train-and-equip target of sixteen thousand troops is inadequate for the missions in Syria.” That which makes 50,000 problematic now is the absence of a protected zone or zones on Syrian territory from which recruits could be drawn without depleting the ranks of front-line fighters currently standing up to both ISIL and the Assad regime. If the idea is to rotate nationalist fighters out of non-protected Syrian areas to Turkey and elsewhere for training, then they will have to be rotated in small batches with additional recruits rounded up from refugee populations. The authors believe than many thousands of Syrians—many former officers and soldiers now at home—can be recruited to the SNSF if areas of sufficient size inside Syria are protected from regime and ISIL terror. Defectors from Assad’s forces will also be a factor.

Syria is no exception to scores of other cases in recorded human history where sectarianism and ethnicity have been manipulated to the point of mass murder by corrupt, power-hungry, and bloody minded politicians. It may well be that the SNSF will not attract to its ranks the kind of Assad partisan willing to engage in door-to-door murder, rape, and theft. It would not, quite frankly, be reaching out to people willing to blow themselves up on receipt of an order from someone on high hoping to live to 100 in material comfort. No one in his or her right mind goes into military service eager for death or grievous injury. Yet as millions of Americans have demonstrated for some 240 years, it is possible to believe in civilized political values and still prevail militarily.

Question: When has something on the scale of the SNSF ever been successfully accomplished in the past?

Answer: For people of a certain age and a certain nationalist sentiment, the question itself is a sad one. America, it seems, because of grotesque political misjudgments resulting in extended wars of choice in Vietnam and Iraq, is becoming the Republic of No-Can-Do; a supplicant in search of guarantees before essaying anything at all difficult abroad.

The United States Armed Forces has executed many effective training missions in the past. The excellent work, for example, of the Military Assistance Training Command, Vietnam (MACV) was ultimately overshadowed and undone by bad political leadership in Saigon and Washington. Most recently, the work of US trainers in rebuilding the Iraqi armed forces was nothing short of excellent, as was training accomplished in the Balkans in the 1990s. The problem is not with the trainers: uniformed Americans excel in both training and training the indigenous trainers. The challenge that has sometimes not been met in the past is political-diplomatic in nature. This is why Section 2 of the recently issued report is entitled “Policy and Diplomatic Challenges for the United States.”

Let us accept, for the sake of argument, that there is no clear, exact, and successful precedent for the SNSF. Is that sufficient grounds for rejecting the idea? Does anyone really pretend that train-and-equip will help defeat ISIL in Syria and set the stage for Assad-removing negotiations? Does anyone have a better idea for establishing a real basis for genuine negotiations and ultimately stabilizing Syria?

In the Republic of No-Can-Do nothing is possible without a guarantee of quick gratification. Fortunately, the generations that preceded us were not of such a mindset. In 2015, there are no easy or even moderately difficult options left for US policy on Syria or ISIL more broadly. Creating protected zones and building the SNSF represents the best way forward. If it requires setting a precedent for those who will follow, so be it.