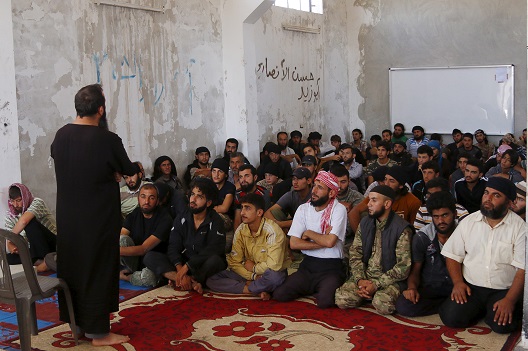 Salafi groups in Western media have triggered a debate over the jihadists’ role in the Syria war. The proliferation of terrorist groups like the Islamic State (ISIS or ISIL) has left the West wary of the Salafis, a narrative used by Syrian President Bashar al-Assad to promote himself as a counterweight to the spread of extremism—an expansive label lumping together secular rebels and Salafi factions. The temptation to group all Islamists and rebels under a single label ignores new dynamics—from internal rivalries to efforts to consolidate some groups—that could shape foreign policy responses and, indeed, the Syrian conflict itself.

Assad’s future as president appears increasingly less viable as his territory shrinks to one sixth of pre-2011 Syria. Despite the lack of adequate military and financial support, the Free Syrian Army (FSA)—Syria’s nationalist rebel coalition—remains the best hope at reviving a post-civil war Syria, but represents only one of many players in a scene dominated by radical heavy weights. The limited US $500 million train-and-equip program has had little effect in propping up the FSA. In July, the first US-trained fifty-four graduates of the program crossed into Syria. The Nusra front swiftly kidnapped seven before later releasing them in August.

In contrast to the weakness of the FSA, Islamist and Salafi groups have continued to capture territory and consolidate their strength, with most recently advances made by Jaysh al-Islam in the Ghouta region, close to Damascus, on September 13. The philosophies that shape their motives, however, yield subtle but important differences that make all the difference in a post-war Syria.

ISIS and the Nusra Front, for instance, remain ideologically close to al-Qaeda. “For ISIS and Nusra, jihad is at the center of their ideology, which is by definition transnational. But while ISIS militants are takfiris [the belief that other groups are apostates], Nusra includes elements who are and others who are not,” said Syrian Islamic scholar Sheikh Hasan Dgheim in an interview with the Atlantic Council from Rihaniya, on the Turkey-Syria border. Alternatively, groups such as Jaysh al-Islam (a coalition of Islamist and Salafist units) and Ahrar al-Sham (formerly a coalition that coalesced into a single brigade) are considered mujahideen who use jihad as a rallying cry against the Assad regime. “For us, jihad constitutes a means and not an end, which means it is limited to the context of the Syria war and will end with it,” Lieutenant Hassan Alloush, spokesperson for Jaysh al-Islam, said in an interview with the Atlantic Council.

Fear of all things Salafi has led many experts to conflate Syrian Islamist rebel groups, regardless of their ideological and political evolution. Former US Ambassador to Syria Robert Ford, now at the Middle East Institute  advocated engaging with Ahrar al-Sham, demonstrating in his writing how these misconceptions could lead to lost opportunities to end the conflict. Jihadists’ priorities have slowly diverged in recent years, as illustrated by the different philosophies of factions such Jaysh al-Islam and Ahrar al-Sham—whose goals are above all Syria centric—and radical factions such as ISIS, Nusra, and Jund al-Aqsa—whose primary agenda remains transnational.

The mujahideen have proven their ability to adapt to changes on the local Syrian scene. Ahrar al-Sham initially positioned itself as a faction rejecting Western-style democracy and calling for a Sunni theocracy in Syria after the fall of Assad. Syrian sources privy to the group’s dynamics, however, note that a growing number of its militants have admitted that any post-Assad government should reflect the Syrian people’s will. The group’s leader Hashem al-Sheikh also stated that future governments would emerge from the people.

This evolution has shifted Ahrar al-Sham’s policies in a more moderate direction. After the Jaysh al-Fath coalition—a major Islamist rebel actor comprised of Salafis and Islamist groups including the Nusra front, Ahrar al-Sham, Jund al-Aqsa, and Ajnad al-Sham among others—secured a significant victory in Idlib in March, Ahrar al-Sham spokesperson Abu Yazed Tafenaz insisted that civilians should administer the city and that rebel groups should handle the city’s security.

Jaysh al-Islam leader Zahran Alloush has similarly reversed previous policies hostile to Western values. In an interview in 2013, Alloush rejected democracy, adding that only an Islamic system would guarantee justice and equality for all. He also voiced hatred toward Shia Muslims and many believe him to have orchestrated the kidnapping of famous Syrian pro-democracy activist Razan Zeitouneh, among others. Yet, Alloush is also a staunch opponent of ISIS and Nusra. Jaysh al-Islam has increasingly worked with civilians to support local administration, the justice system, and policing efforts in Ghouta, according to Istanbul-based Syria expert Sinan Hatahet.

Both Jaysh al-Islam and Ahrar al-Sham appear to have agreed during a recent Islamic panel to adhere to the Syrian constitution of 1950, preserve local institutions, and reject revenge operations, according to Hatahet and Sheikh Dgheim (although this information could not be independently confirmed).

Internal dynamics also play a key part in shaping the behavior of Salafi groups. Recently, Ahrar al-Sham’s foreign relations official Labib al-Nahhas launched a charm offensive on the West, penning editorials in The Washington Post and The Daily Telegraph where he argued that his group represents a moderate Syrian faction. However, shortly after, another branch of the movement published a powerful eulogy of Taliban leader Mullah Mohammed Omar that praised the Taliban movement’s activity.

These recent contradictory statements underline a rivalry between two competing currents within Ahrar al-Sham. Nahhas represents the more moderate, media-friendly arm while a man called Mohamed Abu Sadek leads the more conservative trend—one with close ties to the Nusra Front. These relative ideological rivals will soon face off in the group’s next election, the outcome of which would undoubtedly affect Ahrar al-Sham’s future policies.

The Nusra Front has also struggled with three competing internal movements: one comprised of takfiri militants close to ISIS; another conservative movement represented by Jordanian scholar Dr. Sami Uraydi; and a reformist movement led by Syrian born Abu Maryam al-Qahtani. Qahtani has shown the greatest flexibility in working with FSA factions and supported the creation of a Turkish safe zone, which the Nusra leadership had rejected. Some Islamists within Nusra believe that the rivalry could lead to Qahtani’s withdrawal from Nusra. If he can secure the necessary funding, he would either start his own group or join one of the Syrian mujahideen groups.

Understanding local dynamics namely those that might possibly result in a restructuring of influential groups is key to developing efficient foreign policy to Syria. The Jaysh al-Islam and Ahrar al-Sham cases show that Syrian hardliner groups have the capacity to evolve and that key leaders within these factions can redirect a group’s philosophy. By identifying influential figures and providing the appropriate support, they will influence the future of their movements and possibly of Syria at large.

Image: Rebel fighters from the Ahrar al-Sham Movement listen to a religious lecture in the Idlib countryside, Syria, July 7, 2015. (Reuters)