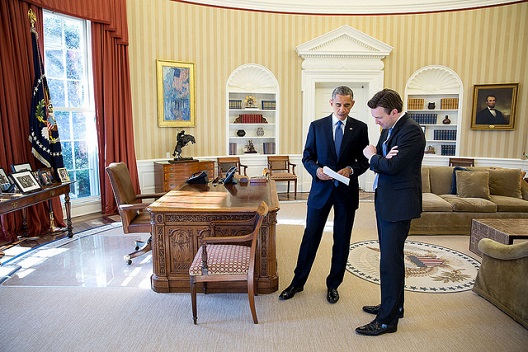 Obama administration commentary on developments in Syria plumbed new, uncharted depths on September 17, when White House spokesman Josh Earnest laid blame for the failed “train-and-equip” program on “critics” of the administration who had allegedly touted the endeavor and forced it upon the president as “the recipe for success in Syria.” Earnest’s alibi may well have been a first in the history of the American Republic: the inaugural White House deployment of “the Devil made me do it” excuse for policy failure. John F. Kennedy could shoulder the blame for the Bay of Pigs fiasco as the “responsible officer of government.” For this administration, such an approach would appear to be unattractive.

In April of 2015 the Atlantic Council published a study calling for the creation of an all-Syrian national stabilization force; one that would have the mission of stabilizing the entire country by overcoming the full range of armed elements tearing the country to pieces and putting significant parts of the population on the road. That study specified why “train-and-equip” as designed by the Obama White House and foisted on the Department of Defense could not work and would not work. It remains a credible blueprint for moving forward—for creating a force whose presence might well provide the basis for the elusive Syrian political process sought by the Obama administration.

From the beginning, however, President Barack Obama has seen “train-and-equip” as the checking of a box: the need to be seen as doing something in the wake of the Islamic State (ISIL or ISIS) overrunning much of Iraq in June 2014 from secure bases inside Syria. Coalition air forces operating against ISIL in Syria lacked a ground combat component. The administration “recipe for success” was to try to recruit anti-Assad regime rebels to turn their backs on the regime and instead pursue a one-way mission against ISIL—something that no critic of the administration would have been naïve enough to recommend. As if recruiting foreign fighters to serve a foreign power for foreign purposes were not enough, a crippling vetting process for recruits insured that only a handful of trained and armed personnel would be available for duty.

Mr. Earnest wants administration critics to “fess up” for having forced the US Commander-in-Chief into a policy cul-de-sac. It is not likely, however, that the secretaries of state and defense, the chairman of the joint chiefs, or the CIA director serving in the summer of 2012 will today confess error in having recommended to President Obama that “train-and-equip” be instituted then, when Assad regime atrocities were conjuring an al-Qaeda presence in Syria that had become noticeable. Leon Panetta, Hillary Clinton, David Petraeus, and Martin Dempsey were not wrong. The fact that this administration lacks the character to acknowledge any culpability at all for a catastrophe now disgorging Syrian refugees into the heart of Western Europe changes neither the historical narrative nor the here-and-now policy challenge.

Many critics of Obama administration would gladly, and voluntarily, accept blame for all that has happened since March 2011 if only the administration would begin now to think strategically about the Syrian challenge. Thursday, September 17 was notable for much more than Mr. Earnest’s finger-pointing performance. On that date, Assad regime helicopters off-loaded barrel bombs onto residential neighborhoods in Aleppo, causing the usual lethal mix of terror, trauma, violent death, and grievous injury. Hopes (and expectations) that the recent Washington-Ankara agreement on anti-ISIL measures might include a measure of protection for Syrian civilians were dashed.

Speaking privately, a senior administration official said, “I’m deeply sorry to say the United States has not made a policy decision to prevent the slaughter of innocent Syrian civilians by regime barrel bombs … to our everlasting shame.” One can only hope and pray that such a decision will be forthcoming. For even if President Obama cares nothing on the humanitarian level about the Assad regime’s collective punishment and mass murder, surely he realizes how the regime’s industrial scale criminality plays into the hands of ISIL in the form of a recruiting bonanza, both inside Syria and around the world.

From the beginning of Syria’s crisis—long before the appearance of ISIL as the Assad regime’s partner and rival in crime—the administration has resisted formulating and pursuing a national security strategy. There have been many reasons for this failure: White House belief that Assad would fall quickly; hope that Russia would help arrange a negotiated agreement; fear of where an objectives-based strategy might lead; and a desire not to offend Iran, the regime’s most dedicated and influential ally and enabler. The excuses have been just as numerous: slippery slope, opposition disunity, and the sheer complexity of the problem. It is this last alibi—one well rooted in public opinion—that the administration clings to as a political life preserver.

Yet perhaps even this administration can accept one straightforward proposition about Syria and its place in a war commissioned by President Barack Obama to degrade and destroy ISIL: the protection of Syrian civilians is the sole portal through which anything good can happen in Syria. As long as the daily atrocities continue, there will be no political process. As long as barrel bombs fall on civilians and sieges strangle the innocent, ISIL will have hope of appealing to people utterly abandoned by the West.

Three years ago Kofi Annan—then the United Nations special envoy for Syria—understood fully he could get nowhere diplomatically without sharply deescalating a vicious, civilian-centric conflict. Hence his six-point proposal. Today his successor once-removed—Steffan de Mistura—struggles to find some diplomatic leverage in the face of a family political-criminal operation that sees millions of Syrians as fair game for slaughter and starvation. He cannot succeed absent a modicum of civilian protection.

The center of gravity in all of this is the brain of Barack Obama. If he accepts the central proposition—the protection of Syrian civilians is the sole portal through which anything good can happen in Syria—then he will make civilian protection the exclusive focus of his administration’s Syria-related diplomacy with Iran and Russia. Moscow and Tehran can, if they wish, force the Assad regime to cease mass casualty operations directed at residential neighborhoods. The Supreme Leader and President Vladimir Putin can oblige Bashar al-Assad to lift the sieges and let United Nations humanitarian convoys through, fully in accordance with UN Security Council resolutions.

If Iran and Russia elect to continue their enthusiastic support for ISIL-facilitating Assad regime mass murder, then there are ways and means available to President Obama to complicate the regime’s ability to do its worst. It is, as noted by the senior official quoted above, an “everlasting shame” that such steps have not been implemented to date. But there are still tens of thousands of lives to be saved, millions of refugee flights to be preempted, and a war to win against ISIL.

No Syria strategy would be worth its weight in paper absent protective measures for defenseless Syrian civilians. Blaming critics for policy shortfalls is regrettable, but perhaps unimportant in a “politics as usual” context. Leaving children defenseless when means exist to offer a modicum of protection is shameless and unforgivable. No shortage of administration officials would agree. It is entirely up to the president to rectify this matter and give his hopes—victory over ISIL and a negotiated political settlement in Syria—a chance for success.