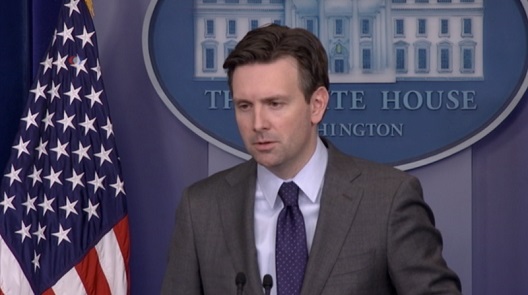 In his May 19 briefing, White House Press Secretary Josh Earnest leveled, in his own peculiar way, with the people of Syria: “… the President feels very strongly that the very significant problems that are faced by people in Syria, for example, are not problems that the United States is going to come in and solve for them. We’re not going to impose a solution on Syria. We’re not going to commit billions of dollars and the lives of hundreds of thousands of our men and women in uniform to try to solve those problems.” The fact that no one is calling for a ten-figure expenditure of money or the commitment of hundreds of thousands of troops is neither here nor there: the Syria straw man strategy is a permanent staple of administration disinformation. What is important is the implicit, but blunt message to the people of Syria: you are on your own.

The message itself will shock no one in Syria. The Assad regime and its Iranian enablers understand quite clearly that the straw man deception is intended to erase past rhetorical excesses about people stepping aside, red lines not to be crossed, and barrel bombing of children rising to the level of core US interests. Their contempt for the president is so cold and so comprehensive that they seek now to erase what is arguably the only thing the administration has gotten right about Syria: supposedly eliminating the ability of the regime to wage chemical warfare against Syrian civilians. For people on the receiving end of Assad regime atrocities, being told by Mr. Earnest that their problems are not ones “the United States is going to come in and solve for them” is not—in terms of “their problems”—at or near the top of their lists. Although the contemptuous tone may be new to them, they have long known that President Barack Obama and his people have, as they say, other priorities.

There are, of course, things the Obama administration could do to complicate the ability of the Assad regime and Iran to slaughter, maim, terrorize, and traumatize people by the tens of thousands. But the president seems uninterested. The “why” may be twofold: fear of offending Iran and the apparent belief that to do anything at all puts one inevitably and irreversibly on a slippery slope toward invasion and occupation.

The slippery slope thesis may be a genuine reflection of Mr. Obama’s belief that he is essentially powerless to regulate matters once military force—even in limited dosages—is applied, or it may be an excuse. What is important is the point made by Ambassador Samantha Power when she chronicled the 20th century mixed performances of US leaders faced with mass murder in faraway places. Unless the President of the United States is interested, the default position of Americans will be that of Mr. Earnest and his boss: sorry, but it’s not our problem.

There are twenty months left for an administration so self-absorbed and yet so self-unaware that a key spokesperson is actually able to say, “We’re not going to impose a solution on Syria” without betraying even a hint of irony. Twenty months in Syria-time is an eternity. One could easily imagine 500 thousand dead, 5 million refugees, and 15 million internally displaced. Recent setbacks notwithstanding, one could see the Assad regime continuing to prosecute a campaign of mass homicide, buoyed aloft by new injections of Iranian cash made possible by the lifting of sanctions. Twenty months from now an incoming US president could find Syria essentially partitioned between two sets of arch-criminals: the Assad regime in the west, and the Islamic State (ISIL or ISIS) to the east—a country in its death throes, hemorrhaging terrified human beings in all directions.

Faced with these kinds of prospects, Syrians already aware of the moral and policy vacuity of the West have no choice but to take matters into their own hands. This is the tallest of tall orders. As ISIL gobbles up more territory while being chased futilely from 30 thousand feet and as Assad—with Iran’s blessing—plasters residential areas with barrel bombs, the options for ordinary, nationalistic Syrians and those trying to represent them seem slim indeed.

As he brings “stakeholders” to Geneva to discuss next (or first) steps on a political-diplomatic track, perhaps United Nations Special Envoy Steffan de Mistura can offer his own good offices to Syrians of all political persuasions to meet safely to discuss the kinds of security arrangements that can set the stage for political transition negotiations. Perhaps the United States can contribute to Mr. de Mistura’s efforts by trying to prevail on Iran to get its client out of the business of war crimes and crimes against humanity. This will not be easy; no doubt, Tehran sees utility in Assad regime tactics. Clearly, it has done nothing to date to mitigate mass murder.

Syrians probably do not need a “wake-up call” from the likes of Mr. Earnest. But those who needed one got it. Whatever his statement lacked in candor and honesty, it more than made up for in terms of conveying to Syrians the essence of this administration’s policy: you are on your own. Unlike other administration statements about Syria, this one should be taken seriously.