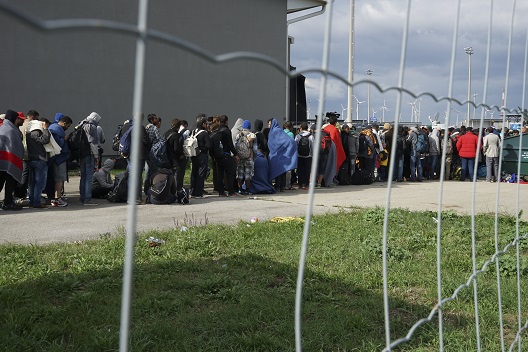 Just a few months separated the arrival of Syrian refugees Ahmad al-’Awda and his friend Mahmud al-Agha to Germany. Both of them fled from the war in their country that started in 2011. Al-’Awda arrived in Germany in January 2016 and al-Agha arrived in May 2015. This short eight month difference separating their arrivals was enough to guarantee that al-’Awda would not be able to apply to bring his family, who are still in Syria, because he did not get permanent residency in Germany. Rather, due to a series of laws, the German authorities have been granting only temporary residence papers to Syrian refugees.

Permanent residence enabled al-Agha to apply for family reunification in Germany, but temporary residence does not grant that same right. Three years have passed since al-’Awda arrived in Germany. Alongside thousands of other Syrian refugees who arrived after the law was revised, and have what German law calls subsidiary protection, he is waiting for his legal status to change so that he can apply to bring his family.

According to statistics from the Federal Office for Migration and Refugees (BAMF, according to its German acronym), the number of Syrian refugees in Germany reached about 700,000 in 2017. The refugees were divided into two groups. The first were refugees seeking asylum. They received full protection status for three years and travel documents as foreigners in Germany. They are also allowed to submit asylum applications for their families.

The second group of Syrian refugees have temporary residency and their asylum applications are still pending. Due to the ongoing large number of migrants that have continued to arrive since 2016, the German authorities granted refugees one-year temporary residencies with extensions each year. However, the family reunification policy was also suspended for almost two years; starting from mid-2016 until March 2018.

According to official statements, there are 132,800 Syrians who represent the bulk of the 192,400 refugees, which is 70 percent, who have temporary (subsidiary) protection in Germany.

Disagreements between German parties, particularly the extreme right that vocally rejects refugees, forced the German Government to approve an incomplete policy. Temporary resident holders are now allowed to apply for family reunification, but with the restriction that only 1,000 people can apply each month. This is a relatively small number compared to the tens of thousands of refugees seeking to bring their families to Germany. This decision came into effect at the beginning of August 2018.

According to recent media reports, the German Government has not been able to meet this number. From August to November 2018, the German embassies received 44,736 family reunifications applications. However, the number of those who actually received visas at the end of 2018 was about 1,500. The German Interior Ministry justified this small number of visas, saying the Bureaus of Migration and Foreigners faced several obstacles in managing the family reunification applications for those with subsidiary protection.

Al-’Awda is one example of thousands of Syrian refugees that face hardship and adversity in their new countries. Another is Sahar Ibrahim, who arrived with her 10-year-old son in Berlin in mid-2016; while her infant stayed with his grandmother in Syria. Sahar says that she fled from Idlib city three years after her husband was killed in an air raid. However, she was unable to bring her baby with her out of fear that the difficult journey would be too hard on him. She moved initially to Turkey, traveled by sea to Greece, and from there completed her journey to Germany.

Ibrahim received temporary residence, but that has not—despite submitting a number of applications to BAMF—allowed her to see her son. She has even hired an attorney to help her change the type of residency she has.

German law allows immigrants to apply for family reunification for spouses, children who are minors, and the parents of minors who arrived in Germany without their guardians. However, it does not include marriages outside of Syria or while refugees were fleeing to Germany because it requires couples to be married before they seek asylum—not after.

In the face of this difficult reality, that thousands of Syrian refugees face in Germany far from their families, it seems that any steps taken—besides just waiting—are useless. Some refugees raise legal cases to try to change their residency from temporary to permanent, but their chances of success are slim and depend on proving the urgency of their need.

Al-’Awda said to SyriaSource, “Our situation is like being suspended between the sky and ground. Three years and I’m still waiting to see my wife and children after I left them in an internally displaced peoples (IDP) camp in Idlib. I cannot go back to see them, and there is no way for them to come here.”

He adds, “The problem of temporary residence is that it does not give refugees the means to truly integrate in the new society because everything is temporary. I’ve thought a lot about going back to my family, even if it would mean going back to the camps, but several circumstances have stopped me from this path. I abandoned the idea because the central issues are the physical limitations of getting there illegally. In addition, if I manage to get to the camp it is without a job, future, or even a glimmer of hope.”

A number of refugees have decided to leave Germany to take that chance and illegally went back either to Turkey or Syria.

Changing How Refugees are Seen?

A few years ago, the German people accepted Syrian refugees with open arms. A loving atmosphere prevailed in what was at the time known as the open door policy that German Chancellor Angela Merkel had adopted. Due to that, the number of Syrian refugees living in Germany reached around 700,000 in a couple of years. However, this view changed. The matter became a source of tension and conflict between German political parties, especially with the increased popularity of the anti-refugee parties such as Alternative for Germany, which won additional seats in the German Parliament and took third place after it won 13% of the votes in 2017.

Arwa al-Susi, a journalist living in Germany, traces the extreme right’s rise to several factors. The most prominent factor is “the extreme right’s use of Islam and refugees in its electoral campaign and how it directs the discontent of Germans with limited incomes against other political parties. The way they see it, the [other] parties did not keep their interests in mind, but instead focused on receiving refugees and spent large sums of money on them.”

Public opinion of refugees in Germany shifted, and refugees have become a bargaining tool between the political parties.

After being sworn in for the fourth time in March 2018, Angela Merkel promised to speed up the process of sending back rejected asylum seekers and migrants with no rights to stay in Germany. The issue of refugees is one of the reasons for the decline in popularity of Merkel and her party; which led them to lose the elections in some German states.

Horst Seehofer, the German Minister of Interior, mentioned last June that the government coalition in Berlin lowered the number of refugees allowed into Germany to a range of 180,000 and 220,000 in 2018. The government met this allocation cap in fact before the end of the year, marking a huge decline in the refugees arriving to Germany.

Many Syrians are afraid of how the subsidiary residency campaign in Germany complicates the process of applying for residency in the future. As political parties debate the need to send refugees back home—and whether the conditions that drove them to leave their country of origin are still ongoing—Syrian refugees find themselves at risk of being sent back to Syria or another country; which is likely to put their lives and their families at risk.