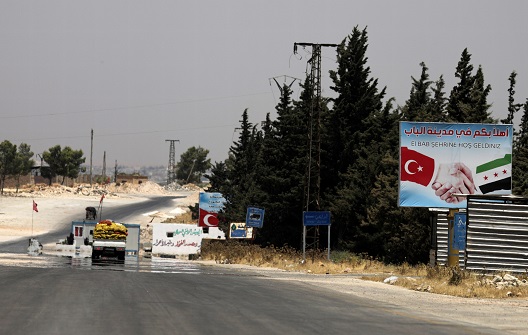 The indiscriminate bombings on Idlib pushed Mohammad Bayour, 20, to make a treacherous journey to Turkey. “I wanted to escape this misery—the war, poverty, everything. I wanted to live in peace and security,” Mohammad explained. Yet the journey is fraught with danger that doesn’t end at the border. If anything, the border itself is the most dangerous part of the journey with Turkish border guards known as “Jandarma,” who frequently capture, beat, and steal from Syrian refugees only to send them back into Syria.

Being the oldest of three children, Mohammad supports his ageing parents and two young siblings. He traveled to Turkey to provide a better future for his family. “I needed a job to send money back to my family so they can live a decent life here,” he added.

But Mohammad never made it to his destination. He was crossing through the smugglers route when the Jandarma captured him. Mohammad knew the journey wouldn’t be easy, but what he experienced was by far more terrifying than he had imagined.

“They started interrogating me, slapping my face, and beating me with rifle butts,” Mohammad explained. “They then threw me on the ground and placed my head near the tires of a military vehicle threatening to crush it under the tires,” he continued. “It was terrifying. I wanted to escape death, but I ended up walking straight into it.”

The guards then walked Mohammad over to a large square where hundreds of Syrian families waited helplessly, sometimes for days, to be sent back to Syria. Mohammad said Turkish guards were exploiting some Syrians by taking their phones and money.

“I heard the guards telling a few guys to hand over their phones. They take peoples’ phones, sell them and, split the money among themselves,” he said.

Such violations and acts of violence against asylum seekers at the Syrian-Turkish border are nothing new. Incidents of beating and torture of Syrians have been ongoing throughout the past few years. The Syrian Observatory for Human Rights estimates at least 422 Syrian civilians have been killed by the Turkish guards since 2011, including seventy-six children under the age of eighteen and thirty-eight women over the age of eighteen. A 2018 Human Rights report indicates that Turkish guards are indiscriminately shooting and abusing Syrian asylum seekers attempting to cross into Turkey. And the arbitrary assaults and shooting by Turkish Jandarma continue almost daily.

The daughter of Umm Yousef, a widow from Aleppo, was recently shot dead at the border. Umm Yousef, who fled Aleppo suburbs with her six children, was approaching the border wall when the guards targeted her with live fire, hitting her daughter in the head. And despite their pleas to cease firing and to rush the dying child to the hospital, the guards continued indiscriminately firing at them. Umm Yousef and all her children were wounded. They laid on ground bleeding for two hours before they were rushed to the hospital.

The Turkish guards have also reportedly targeted Syrian camps alongside the border. In June, a woman was killed and her child wounded in a shooting on a refugee camp near the village of Kafar Loseen. Two other refugees, including a child, were also killed in April near Bab al Hawa camps and an entire family was wounded. Residents of Kafar Lossen have previously protested the sniping of civilians by Turkish guards and demanded the Turkish government to take measures to stop the arbitrary shootings on refugee camps.

The indiscriminate fire by Turkish guards is also preventing Syrian farmers in towns alongside the Turkish-Syrian border from harvesting their crops. Farmers in the village of Dorriyeh in northwest Idlib say they are regularly targeted and wounded by Turkish snipers, which makes it extremely difficult for them to harvest their crops for their village—90 percent of whose population depends on agriculture.

A media activist and journalist from Idlib who asked to remain anonymous for security reasons said that even media personnel and journalists are targeted by Turkish guards—and are violently restricted from covering the violations of the guards. “Anytime you are carrying a camera, you are at risk of being beaten and tortured. The restrictions on media is quite shocking,” he said.  “My friends have told me unbelievable stories of peaceful activists attacked and arrested just because they had a camera.” And in a recent incident that took place in May, the Turkish officers arrested and brutally assaulted Syrian journalist Mazen al-Shami and members of his family at the border. In a video posted on social media, Mazen described the humiliation and beating he and his two sons endured and revealed the bruises and injuries on their bodies, stating that “all of this just because we are journalists.”

Restricting media activists is making it all the more difficult to report these violations and show the world what is really going on.

“Whenever major incidents take place, like shooting on camps and killing refugees, Turkish officers immediately lockdown the area and prevent journalists from approaching the scene,” the media activist said. “No one is able to talk about what is going on—it is too frightening to do so.”

Today, Turkey hosts more than 3.5 million Syrian refugees, the largest population of displaced Syrians by the war. Throughout the first four years of the conflict—and at a time when Europe, Jorden, and Lebanon restricted entry of Syrian refugees—Turkey kept a generous “open door” policy, providing humanitarian aid to hundreds of thousands of Syrians. Turkey has also received international praise for its hospitality and for hosting the highest number of refugees in the world.

But in 2015, Turkey, too, started shutting its gates in the face of Syrians and launched a construction project for a 764-kilometer concrete wall along the Syrian border in an attempt to increase border security and limit illegal border crossings. And with the growing hostility against Syrians year after year, amid the country’s deteriorating economy and rising unemployment, Turkey not only violently restricted the entry of Syrians and stopped registering refugees—but also began forcibly deporting Syrians, systematically closing refugee camps, and eventually shutting down aid organizations and medical clinics. And now, Turkish authorities are carrying out one of the harshest crackdowns on Syrian refugees. The Interior Ministry announced earlier last month stepping up raids against undocumented Syrians. Security officials are also calling for the arrest of Syrians involved in unspecified crimes. Hundreds of Syrians have already been deported from Istanbul in recent weeks, causing widespread fear of deportation among Syrian refugees in the city and forcing many to stay at home.

Even though nations can, and should, prevent illegal immigration and protect border security, using violence against peaceful asylum seekers, arbitrarily shooting and killing innocent civilians and children should not be justified or tolerated. The inhumane and degrading treatment of Syrians at the border does not only violate their right to seek protection from persecution, but also violates international law that absolutely prohibits the ill-treatment of asylum seekers. Asylum seekers have the right, like everyone else, to be treated humanely—and not to be cruelly assaulted, detained, or gunned down.  The Turkish Jandarma should be held accountable for violating human rights and restricted from targeting civilians. Turkey can increase its border security all it wants—but in doing so, it should uphold international law and respect the rights and dignity of Syrians.