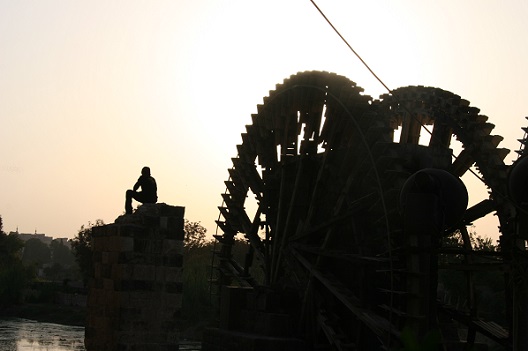 (Photo: Flickr/Gavin. A man looks out from the Noria Wheels, Hama)

In late March 2015, armed groups opposing to the Assad regime gathered to plan for the liberation of the Idlib in northern Syria. The groups included the Al Qaeda-affiliated Nusra Front, Ahrar al-Sham al-Islamiyya, Sham Legion, Jund al-Aqsa, and the Sunna Army, most of whom are considered jihadist forces. They formed Jaysh al-Fatah (Army of Conquest) Operations Room, an army with no leader or unified military body. Despite that, it quickly took Idlib city, and then advanced to other neighboring cities, including Jisr al Shughur near the government-controlled mountains on the Syrian coast. This army has struck terror into the ranks of Assad’s supporters, especially after arriving at the Joreen base in central Syria in the region known as al-Ghab Plains.

Recently, the Army of Conquest announced its intention to continue moving south and take Hama city, located just twenty-eight miles north of Homs on main highway to Damascus. Although the battle has not yet reached Hama, the announcement spread fear among Assad’s ranks. The Army of Conquest has advanced from the north, most recently taking the military base at Morek seventeen miles north of Hama. The military operation has not proceeded beyond this point mainly because, with the cover of Russian warplanes, regime forces have been able to advance into opposition controlled regions on the southern outskirts of Aleppo. The opposition hastened to relocate its forces from Hama’s countryside to Aleppo, resulting in violent clashes between the two sides. Initially, the regime gained control over a number of villages south of Aleppo. However, in the past week, the Nusra Front was able to regain these villages, the most prominent among them being the villages of al-Qurasi and al-Hadir.

The regime’s strategy seems to be to exhaust the opposition by moving its troops from one location to the next, knowing that it is difficult for opposition fighters to match these movements. The regime also has forces in multiple strategic areas, which enable it to launch simultaneous attacks that confuse the opposition. Further compounding this, Russia’s air support has replenished the regime’s airpower, which the opposition had depleted by capturing Syrian army airports. This has been in keeping with the regime’s recent scorched earth policy, which was on full display in the city of Salma near Latakia. More than six times Assad’s forces attempted to advance on this opposition-controlled city, and each attempt was preceded by shelling the city with hundreds of bombs, destroying large parts of it. This same approach has been applied recently in the countryside of Hama and Aleppo.

In an exclusive interview, Lieutenant Abu Hamza, head of an artillery division in the Army of Conquest, stated, “At first the Army of Conquest was originally only a small operations room that later transformed into an army with a consultative council. There is no leader of the Army as of now. The armed groups would not have been able to achieve the victories of this past year without unifying in this manner, which led to the liberation of large swaths of land, most prominent of which was in Idlib.”

Regarding the battle for Hama, he said, “The battle for Hama has not yet begun as it should have. We are prepared. We have liberated a small village [Tel Sukayk], however battles such as this require large numbers and thorough preparations. I’m glad to tell the Syrian people that there are many fighters joining the Army of Conquest in expectation of this battle.”

Regarding the Free Syrian Army’s (FSA) support for the Army of Conquest, he said, “The FSA played a large part in realizing what has been achieved, especially concerning the liberation of Idlib. However it has played an even bigger role recently in repelling the regime’s advances that have the backing of Russian airpower. It will play a prominent role in the coming battle.”

The battle’s delay is likely due to the recent Russian intervention, which has given Assad’s forces a morale boost and, just prior to the events in Vienna at the end of October, enabled it to advance on several fronts. However, according to the official Twitter feed of the jihadist Sheik Abdullah al Muhisini, one of the most prominent figures in the Army of Conquest and an avid supporter of the Islamic State (ISIS), this new tactic has not achieved any victories worth mentioning. Moreover, last Thursday the jihadist groups seized the city of Morek, considered the northern gateway to Hama, suggesting that Russian support is not as strong as the opposition feared.

Politically, the Army of Conquest has managed to establish a civil administration in Idlib after routing the regime army. It is providing basic services including water, electricity, education, and medical services, which has incurred local support. Life has begun to return to the city with people actively going about their business in the markets and city centers. The Army of Conquest only imposes direct control over the city’s mosques, and it concentrates its efforts on Fridays when men come to pray and listen to the Army of Conquest’s supplications to join the opposition and liberate the rest of Syria. Recently, the University of Idlib reopened and young men and women have started to attend.

Most of the groups comprising the Army of Conquest are Islamist and jihadist in nature, but they have nonetheless beaten back Assad’s forces. They recruit fighters from the Syrian people despite their affiliation with Islamist groups such as the Nusra Front. The lack of international support for any major armed coalition in western Syria has cleared the way for the Army of Conquest to become the most powerful force in Syria in the future. Lieutenant Abu Hamza made it clear that, despite the presence of Al-Qaeda in its ranks, there is nothing impeding the FSA’s cooperation with it.

However, cracks have begun to appear in the ranks of the Army of Conquest. Some of its groups, most prominently Jund al-Aqsa, oppose coordinating with the FSA, which they consider a puppet of the West and the United States in particular. However other groups, such as Ahrar al-Sham, do not harbor the same hostility towards the FSA. According to the journalist Abdul Rahman Khadar, it is expected that this difference of opinion will split these two factions in the coming days. He also asserts that this division may be one of the reasons for the delay in the battle for Hama. There are some factions, such as Ahrar al-Sham and the Sham Legion, that prefer to work with the FSA, and they have participated in all of the battles against the regime and ISIS.