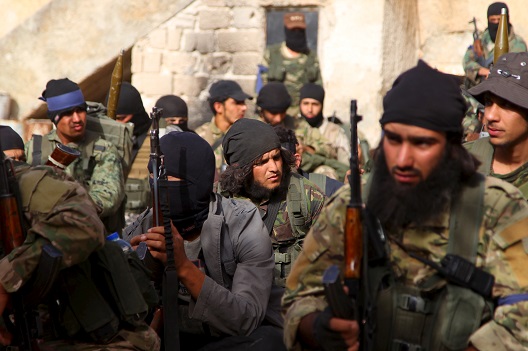 Northwestern Syria, consisting of Idlib city and the surrounding province, northern Hama and western Aleppo provinces, forms the biggest inhabited zone under the control of the Syrian opposition. It is also home to the biggest concentration of pro-Assad forces, including multi-national Shiite militias. Despite the presence of the Nusra Front and other jihadist groups in the area for several years, the balance of power there held steady until 2016, as local groups affiliated with the revolution managed to dominate other factions.

The first was an agreement under which rebel fighters left Aleppo, losing the country’s biggest Free Syrian Army stronghold. Aleppo city represented a model of control by moderate and revolutionary forces, raising the flag of the revolution in opposition to Assad and jihadist groups. In contrast, jihadist groups have strong presence in Idlib and many raise a black flag over their territories.

The second event was a campaign waged by Jabhat Fateh al-Sham (JFS, formerly Jabhat al-Nusra) against several major rebel groups including Jaysh al-Mujahideen, al-Jabha al-Shamiyyeh, Suqur al-Sham, Jaysh al-Islam, and the Fastaqem group; that came in response to their participation in the Astana talks of December 24, 2016. The factions were planning to declare their unification, mainly because of their shared enmity towards Nusra.

The offensive pushed them to join Ahrar al-Sham. Many of their commanders and fighters moved to areas of Syria taken by Turkish-backed forces in its Euphrates Shield operation or into Turkey itself. Days later on January 28, Fateh al-Sham announced the creation of “Hayat Tahrir al-Sham” (HTS) comprising Nour al-din al-Zinki and smaller groups including defectors from Ahrar al-Sham.

After failing to confront Nusra, the operations room in Turkey (dubbed MOM, from the Turkish acronym) decided to stop supporting these factions to put pressure and to improve their intergroup coordination and coordination with the MOM; both those that had joined Ahrar al-Sham and the large number of factions that did not get involved in the battle. The result was the formation of an operations room that brought together all factions under the command of Colonel Fadhallah al-Haji, an officer in Faylaq al-Sham, who has close ties to Turkey and the Muslim Brotherhood. But so far there is no guarantee of a coherent structure to the operations room, on top of disputes between factions within over areas of control and their positions towards Nusra.

It has been clear, especially since the Astana agreement, that the actions of Nusra (under its various names) are in conflict with Turkish policy, especially the campaign against factions that took part in the Russian and Turkish-backed Astana talks. That campaign lost Turkey some of its most important allies in northwestern Syria. Nusra has continued to try and impose its dominance on the ground, showing that it is capable of hobbling agreements signed without its participation, and that it is a de facto authority that states need to deal with.

It is thus attempting to win political space and become de-listed as a terrorist group. That explains its quick acceptance of the deal that was signed in April of this year in Qatar between Ahrar al-Sham and HTS on one side and Iran on the other. The deal stipulated for the opposition to allow the regime to evacuate its supporters from Fuaa and Kafraya in exchange for opposition forces evacuating territories under siege by the regime. It also explains shifts in HTS’s discourse to include national, revolutionary, and political slogans, language it fiercely shunned in favor of Salafist-jihadist discourse. It also explains the resignation or sacking from Nusra of certain Jordanian jihadist figures closely associated with the ideology and leadership of al-Qaeda (most prominent amongst them Iyad al-Tubasy, Abu Jalibib, Sami al-‘Aridy, and Abu Khadija al-‘Urduny). The discourse of the network’s leader Ayman al-Zawahiri has become openly critical of Nusra leader Abu Mohammad al-Jolani; the first such official criticism since the group split away from al-Qaeda.

Tension between HTS and Ankara peaked after the last round of Astana talks, where Turkey, Russia, and Iran signed a deal on de-escalation zones which excluded Nusra. Jolani appeared to feel increasingly threatened and realized that his steps to appear moderate and flexible had not succeeded in getting de-listed as a terrorist group. That prompted him to increase his aggression towards other factions. But he has also become more pragmatic in dealings with states, accepting deals that might remove his group from the terrorist classification and guarantee its survival on the ground.

Turkey is also sensitive about its southern border, wanting to prevent the creation of a Kurdish entity on its back door or a new wave of bombing and mass displacement from the largest Syrian rebel-held population center and military stronghold. That would be more costly both economically and financially. The Syrian Democratic Forces says it intends to launch an assault from Afrin, near Idlib where there has been a major mobilization of Russian forces of late. Regime media has also repeatedly stated its intention to head in that direction as it advances in northern Hama province. An alliance between the regime, Russia, Iran, and the SDF would allow them to open new fronts in southern and western Aleppo province, northern and western Idlib, and northern Hama to cause a collapse, but Turkish and American opposition to such an operation make it less likely to happen; although Turkish forces and factions in the area still feel threatened.

Turkey therefore started months ago to hint at factions close to it, especially the Euphrates Shield forces, that may intervene militarily in Idlib in an operation similar to Euphrates Shield. That scenario would prevent a bombing campaign and a Russian-Iranian campaign under the pretext of fighting Nusra, but it would force Turkey to take on the task of taking on Russia and Iran in that area. Turkish forces began gathering on the other side of the border as HTS mobilized to fortify its presence in the border area, clashing with Ahrar al-Sham in an effort to seize parts of Jabal al-Sheikh Barakat in western Aleppo province, which is where Turkish forces may enter. HTS issued a strongly-worded statement threatening against what it called “incursions by remnants of corrupted factions aimed at the border zone and reaching the liberated areas,” and said it would consider them battlefield targets alongside the regime; a pre-emptive threat against any Turkish intervention.

While Turkey has not officially announced a military intervention or its timing, the possibility alone adds to the escalating tension on the ground and the likelihood of new clashes between HTS and other factions. HTS is more likely to mobilize, fearing that it will become the target of a joint operation between Turkey and FSA factions, and guarantee its ability to remain standing or the unity of its various components––both within the alliance and within Nusra itself––which could fracture if such an operation was launched. At the same time, an operation could be costly to Turkey if it turned into a broad military campaign with repercussions for Ankara’s domestic popularity.

A less costly scenario would be that HTS disappeared peacefully through a deal with Turkey and rebel factions. But that would be impeded by Jolani’s bet on the possibility of being removed from terror lists and gaining political space similar to that granted to the Taliban or Hezbollah, since he has distanced his group from al-Qaeda and shown that he is pragmatic and enjoys considerable clout on the ground.

In summary, Turkey will not risk losing the biggest and most important area controlled by its Syrian rebel allies to the Kurds or the Assad regime. It will not take on the costs of an unprecedented wave of displacement, nor will it accept a continued HTS presence after repeated clashes with it, as Ankara wishes to remove terrorist groups from the area. All the signs are that a Turkish incursion in Idlib is on the way. It will impose fundamental changes on the nature of the powers controlling the area and the future of the conflict between the rebels and the regime in the north.

Image: Photo: Members of Nusra Front gather before moving towards their positions during an offensive to take control of the northwestern city of Ariha from forces loyal to Syria's President Bashar al-Assad, in Idlib province May 28, 2015. REUTERS/Ammar Abdullah