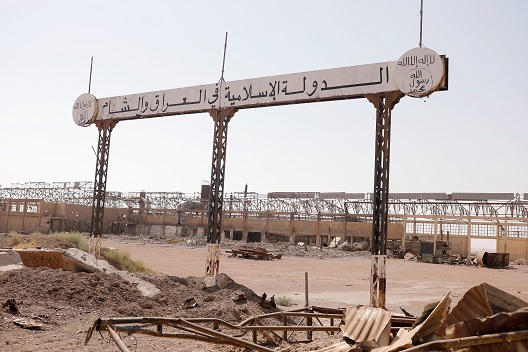 The base of the Islamic State’s (ISIS, ISIL, Daesh) power is in Raqqa and Mosul and is connected with each side deploying fighters across the border in mass. But while the United States and the Popular Mobilization Forces (PMF) took back Mosul, the same cannot be said of Raqqa, which continues to deplete the Syrian Democratic Forces (SDF), despite support by international coalition air strikes and the recent deployment of Apache helicopters. The battle for Raqqa continues for a number of reasons, both tactical and political.

Today marks approximately two months since the outbreak of the Raqqa campaign, officially announced on June 6 (the first campaign for the city began on November 5, 2016). But while SDF fighters outnumber ISIS forces, the SDF has met with fierce resistance. In most cases, ISIS is able to outflank the SDF, causing mass casualties.

ISIS has set the rules of the game. It has done so by adapting to air strikes by the international coalition, digging long tunnels in the Old City of Raqqa and creating a safe haven to shield it from the strikes amidst the ruins. Despite SDF’s intel prowess and numerous agents, it is unable to break through the front lines. The SDF admits facing daring attacks and surprise maneuvers from ISIS. Additionally, vast fields of landmines in vital areas of the battlefields deters the SDF from moving directly towards the city. As ISIS continues to be pushed back, ISIS has reconsidered its suicide bombing tactics that formed the backbone of its deterrence strategy. This reduction is part of the so-called “austerity of Jihad,” a phrase used by Kurdish leaders fighting in Raqqa after they started to notice a reduction in the number of ISIS suicide operations.

ISIS has capitalized on its nimbleness, forcing the SDF to try and match its mobility by constantly moving its front lines to avoid a surprise attack. SDF engages in as many as three or four battle fronts. ISIS, though, has still been able to adjust and redeploy.

The SDF’s initial optimism last June when the campaign began has faltered due to two factors. First, quickly defeating ISIS on the battlefield is becoming more difficult than expected because ISIS has shown itself adroit at street-to-street fighting and the SDF cannot utilize coalition air power as well in an urban environment. Second, the battle for Mosul gained prominence and Raqqa has not, despite the latter being a the self-styled capital of the caliphate, because of Mosul’s size compared to Raqqa, and because the United States gave full support to the PMF and Iraqi army, whereas it has slowly built up its support to the SDF. Moreover, the Mosul battle was often seen as being merely an effort to defeat ISIS, whereas the battle for Raqqa is overshadowed by Syria’s civil war and ethnic tensions between Kurds and Arabs.

The battle for Raqqa is, above all, a battle of tactics and geography. The bet on the large number of SDF fighters has failed. Ironically, the number of new recruits who have been rushing to join the SDF, many of them locals from liberated towns seeking vengeance, has overwhelmed the SDF’s capacity to absorb them. Specifically, many young Arabs found themselves militarily without a leader in a region extending from south of al-Hasakah to Raqqa, amid an armed environment that is struggling to defend and define itself. According to US official estimates, there are approximately forty-five thousand fighters across northeastern Syria, yet SDF military leadership has not revealed actual figures of fighters in Raqqa. The likely estimate is somewhere between ten thousand to fifteen thousand fighters in Raqqa, while observers in the city say that ISIS fighters does not exceed three thousand.

Yet, these are not the only factors affecting the Raqqa campaign—other external ones related to the will of international powers, are at play. The United States’ hesitancy in decisively ending the Raqqa campaign stems from the United States figuring out what to do with Raqqa post-ISIS, and developing a robust strategy for Deir Ezzor. Strategically, the US administration has turned its attention to the city of Deir Ezzor, after the Coalition achieved important milestones in laying siege to Raqqa, particularly by beginning to establish ties with groups from Deir Ezzor and encouraging local militias to join the battle against ISIS. The US military is trying to think ahead, which goes back to lessons learned from the city of al-Tabqa.

Al-Tabqa, a city west of Raqqa city, was captured from ISIS in May 2017 after a seven-week campaign. However, the United States did not have a plan for governing the city after ISIS, and the city still lacks basic resources and a functioning local council; lacking both direction and civil constituents to govern it as a result of a vacuum of influential actors and forces. These fears have also emerged in the cases of Raqqa and Deir Ezzor: what will emerge after ISIS to govern? Nothing emerging gives more of an opening for ISIS to make a comeback, by providing basic needs when people are desperate.

When Bert McGurk, US envoy to the anti-ISIS International Coalition, met figures from al-Tabqa and Raqqa after the battle ended and asked them to form local councils to govern the respective cities, he was surprised when he received a list of only seventeen names with a population of about one million. Simply stopping US intervention after the military campaign is not an option, not only because of the risk of extremists returning, but also because of the broader Syrian war. Simply driving out ISIS and leaving will give an opening to other actors to move in, particularly the Syrian regime, Iran, Russia, and Hezbollah, none of whom the US wants to see reaping the benefits of the America’s military campaign.

Further compounding the security vacuum problem is US support for the Kurds on Arab lands. The United States was able recently after the liberation of Manbij, to expand the ethnic base of the SDF to include Arabs and other groups. Arab fighters constitute today nearly half of SDF, which vindicates the United States from claims of sole US support to the Kurds. The United States fears that military successes against ISIS will negatively affect the stability of Arab-majority areas because of the ethnic tensions. It also fears the Kurds’ growing confidence in their strength and Washington potentially losing control of them.

Herein lies the American predicament. Deir Ezzor is the second largest governorate in Syria with a population of one and a half million before the forced displacement. It has also a huge reservoir of gas, oil, and a large youth labor force which could, if rehabilitated, be the driving force for reconstruction in this governorate and others. Additionally, Deir Ezzor was and still is a huge financial center for ISIS, especially after losing its resources in Iraq. All these factors force the United States to think twice on how to take and govern Raqqa, and how to find a functioning administration to fill the security vacuum post-ISIS.

Abdullah al-Ghadawi is a Syrian journalist and editor at the Saudi newspaper Okaz.

Image: Photo: A sign which reads 'Islamic State in Iraq and Syria' is pictured at the entrance of a damaged brickyard as fighting continues between the Syrian Democratic Forces and Islamic State militants in Raqqa, Syria, August 20, 2017. REUTERS/Zohra Bensemra