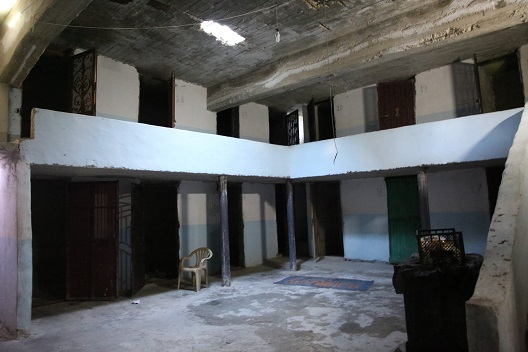 Sixty-eight prisoners are crammed into an overcrowded communal cell somewhere in the Afrin valley. Where they sit depends on how many days they have been imprisoned. As prisoners spend more time in the cell, they gradually move further from the door. New detainees sit and sleep closest to the dormitory’s entrance, standing up as the door is opened by the jailer and sitting back down to sleep when the jailer closes the door. A dim LED bulb lights the cell, under which hangs an old portrait of Abdullah Ocalan, the leader of the Kurdistan Workers’ Party (PKK); who is part of an insurgent group active in Turkey since the early 1980s.

At the time, Afrin was an enclave under the control of the Democratic Union Party (PYD), which is the Syrian branch of the Kurdistan Workers’ Party (PKK), along with its militia, the Peoples’ Protection Units (YPG). The YPG is the main militia in the US-backed Syrian Democratic Forces (SDF); the multi-ethnic grouping of militias that has done the bulk of the fighting against the Islamic State east of the Euphrates River, and against Turkish-backed Arab-majority rebels west of the Euphrates; in the Turkish military intervention dubbed Operation Olive Branch.

Ahmad Raslan was a teacher that lived in the al-Bab neighborhood of Eastern Aleppo city. When the area came under control by the regime in late 2016, Raslan, twenty-four years old at the time, fled with Syrian opposition fighter convoys, towards western Aleppo countryside. At the Ghazzawiyah village checkpoint on the edge of the Afrin valley, then controlled by the SDF, he was arrested and detained on charges of being an informer and a participant in anti-regime demonstrations.

The relationship between the YPG and the regime is complicated. It has been suggested that there is a tenuous alliance with several temporary military coordinations between both parties. Detentions of anyone that is anti-regime may serve as a bargaining tool for future coordinations with the regime.

Raslan was sentenced to one year in prison by a judge who spoke only in Kurdish. Raslan was held incommunicado at Ghazzawiyah station prison for one month. He was then transferred to al-Aswad (Black) Prison on the outskirts of Raju, northern Aleppo countryside west of Afrin, where he served the rest of his sentence.

According to testimony given directly to the author, among those arrested, Raju’s Aswad prison has a notorious reputation. “In prison, I could not see my hands in solitary confinement. That’s why the prison is called the Black Prison. It’s hard to see anything in solitary cells, even those who share the same cell.” Raslan, clearly suffering from post-traumatic stress, smiles nervously as he recalls his arrest.

Al-Aswad Prison is located on the Afrin-Raju road. The building was originally an abandoned olive mill surrounded by olive trees; for which Afrin is renowned. The YPG turned the mill into a prison during the second half of 2012. According to former prisoners, anyone who opposes the PYD ideology—whether Kurdish or Arab—is detained there.

“A while ago, I was contacted by someone on Facebook who found my name and sent me a friend request,” this same person turned out to be a cellmate from al-Aswad. Despite a twenty-six day overlap in the prison, Raslan never met or saw the man with whom he shared the solitary confinement cell, and met him formally for the first time on Facebook.

According to Raslan, prisoners in al-Aswad face varying levels of torture depending on the charges leveled against them, including solitary confinement and electrocution. If a detainee does not confess to the charges, he is placed in a “solitary hole,” around seven feet deep.

With the door closed, it is difficult to breathe, Raslan says. The guards only release a detainee once he confesses to the charges directed against him.

“I was put in the hole for six days,” he says. “The guards tied my arms behind me and blindfolded me. One of the jailers grabbed me and took me to the prison courtyard.” Raslan says he was thrown into a damp hole. “I couldn’t see anything and there was an awful smell. I screamed, but no one answered. Every day, I heard the sound of footsteps, the top door would open, and someone would throw a bag of water at me and a plastic box with bulgur and a loaf of bread in it.”

Six days later, guards pulled him out of the hole and he delivered his forced confession in an effort to leave solitary confinement: “I participated in the demonstrations against the Assad regime. I took up arms against the Syrian army and the Shia militias supporting it; when the campaign for control of the eastern parts of Aleppo [city] began in late 2016.”

According to testimony from former detainees, al-Aswad prison is made up of seven hastily constructed cement dormitories that house between 800 and 1,000 detainees. The prison also has twenty-one solitary confinement cells; a misnomer given that several prisoners are often crammed into small spaces in addition to three solitary holes. Most detainees are either Kurds from the city of Afrin whose political backgrounds are contrary to the PKK/YPG ideology, or Arab citizens who support the Syrian revolution.

Detainees in the prison were interrogated in Kurdish and forced to read publications by the YPG printed newspaper, Ronahi, and books by Abdullah Ocalan. One of the prisoners said that after a jailer saw a detainee putting food in a page of the YPG newspaper, he was put in solitary confinement as punishment.

After the Syrian regime forces and their allied Shia militias arrived in February 2016 at Nubl and Zahraa—regime-held towns in the northern Aleppo countryside—they cut off the road between Aleppo and its northern countryside. This prompted many opposition fighters (including Jabhat al-Shamiyah and Sultan Murad Division), humanitarians, and media activists to flee to Afrin. As they fled, the YPG arrested countless numbers of people; confining them to al-Aswad Prison. Muhammad Arhim, a Syrian from the city of Aleppo, was among those arrested.

Arhim’s father was killed in battle when the regime took control of Aleppo’s eastern neighborhoods. He fled to the city of Azaz in the northern countryside to his grandfather’s house. There, he was interrogated and faced accusations of being an opposition fighter because of a video he had filmed in the wake of Russian airstrikes showing the destruction of Shaar neighborhood in Aleppo city. He was sentenced to six months detention in al-Aswad. “They threatened to hand me over to the Syrian regime at the Ziyarah checkpoint [north of Nubl and Zahraa], if I did not confess,” he said.

Roni Ali, a resident of Afrin said, “The prison used to only house Kurdish opponents of the YPG and this is where they held members of the Kurdistan Democratic Party (PDK).”

“If the roads north and west of Aleppo weren’t cut off, and the opposition fighters weren’t forced to pass through Afrin, where they learned of the prison, it is unlikely anyone would have heard about the YPG’s violations in al-Aswad Prison.”

Arhim says he does not know the extent of the charges he pled guilty to because his captors conducted the trial predominately in Kurdish; which he didn’t speak. The interrogator spoke Kurdish quickly, stopping to inserting a few sentences in Arabic to confirm the charges: “Is that right, Mohammed?” Arhim nodded for fear of returning to solitary confinement or being transferred to “the cave;” another prison with far worse conditions in the heart of the Raju hills.

Armed opposition forces—backed by the Turkish army through operation Olive Branch—took control of Afrin and its countryside in March 2018 and prisoners were released.

Family members of detainees are still trying to find out where their relatives are. The question remains whether SDF forces carried out their threat to detainees during the interrogation process and handed them over to Syrian regime forces and if families will ever know the truth.

The future of the Black Prison remains unclear. It is unknown whether the armed opposition will shut down the olive mill turned prison or keep using it against its own opponents. Many former residents were free to return to the area after the removal of the YPG, but former detainees, Ahmad Raslan and Muhammad Arhim, refused to return; unwilling to relive the trauma and abuse they experienced there along with countless and nameless others.

Image: Photo: Provided by the author of Rajo prison in the Afrin area. Taken post Operation Olive Branch forces liberated the prison and freed the prisoners in March 2018.