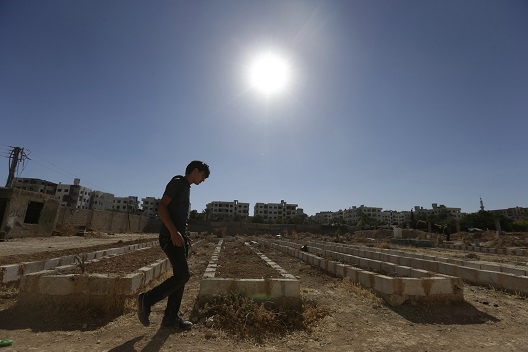 Office of the Press Secretary

Statement from the Press Secretary

As we have previously stated, the United States is in Syria to eliminate the Islamic State of Iraq and Syria. If, however, Mr. Assad conducts another mass murder attack using chemical weapons, he and his military will pay a heavy price.

The above warning will probably suffice in dissuading the Assad regime from conducting another mass terror, mass casualty attack on civilians using chemical weapons. This is no Obama “red line.” If the regime goes forward with a chemical assault it will assuredly pay a steep price.

Why would the Assad regime wish to risk a repeat of what happened during the early morning hours of April 7, 2017, when American cruise missiles impacted a Syrian Air Force base in response to a deadly chemical attack launched from that base on April 4? Perhaps it takes seriously Moscow’s recent warning that American aircraft—manned and unmanned—operating west of the Euphrates River will be tracked by antiaircraft radar and perhaps engaged. For Bashar al-Assad there is no downside to Russian-American armed confrontation. Any worries he might have about Moscow’s dedication to his own political survival are lessened considerably when American-Russian tension over Syria runs high.

The betting here, however, is that the regime will reluctantly shelve its chemical-related plans. For Assad and his entourage, the mass terror properties of sarin gas are highly esteemed. For a regime whose political survival since the spring of 2011 has rested on collective punishment, chemicals, and the horrible deaths they induce hold the promise of terrorizing civilians into submission much more quickly than conventional, high explosive munitions.

Some in the ranks of the Syrian opposition think that Russia is seeking to ground the Syrian Air Force west of the Euphrates River. Recent regime air attacks in Deraa and surrounding areas indicate that those efforts, if genuine, are falling short. The Assad regime calculates that it is central to the national security objectives of both Russia and Iran, and that it may do as it pleases to Syrian civilians. It may well be correct in this assessment. Neither Tehran nor Moscow has hesitated in supporting collective punishment and mass murder.

Given the particularly horrific nature of chemical warfare, the administration’s warning to the Assad regime is entirely proper. It is entirely serious as well.

But sadly, a regime steeped in cynicism and criminal opportunism may seek to exploit to its advantage the elephantine loophole explicit in the White House statement. Instead of using chemicals, the designated target may well be plastered with barrel bombs, gravity bombs, and anything else the regime can bring to bear. The objective would be to kill as many civilians as possible and to reinforce the message the Assad regime has consistently transmitted to Syrians living in areas it does not control: So long as we kill you, maim you, terrorize you, and drive you from your homes with ordnance that is not chemical in nature, that which is left of a hollowed-out West will do nothing to protect you. Whatever Western politicians may say about “Never Again,” it applies not to you.