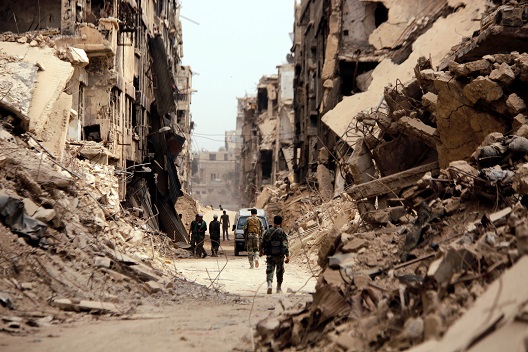 Thousands of civilians trapped in a Palestinian refugee camp south of Damascus are bearing the brunt of a fierce government campaign targeting so-called Islamic State (ISIS) militants holed up in the area.

It remains unclear exactly how many civilians are currently caught in middle of the fierce clashes between Syrian government forces and ISIS militants in the besieged Yarmouk Palestinian refugee camp, the country’s largest. But an estimated 6,000 Palestinian refugees lived in Yarmouk and about 6,000 others lived in surrounding areas before the government’s latest offensive began 10 days ago.

More than 3,500 Palestinian refugees have fled the camp in recent days, mostly to the nearby suburb of Yelda. But an estimated 3,000 others are believed to be trapped under fierce bombardment with no access to food or healthcare, residents told Syria Deeply. The situation, observers say, is leading to a new and severe humanitarian crisis at a time when the Syrian government is tightening the noose around the last remaining rebel-held areas in the country.

Established in 1957 for Palestinian refugees who fled the 1948 war with Israel, the Yarmouk camp was once a densely populated district of Damascus and home to the largest Palestinian community in Syria. It was home to hospitals, schools, cement block homes, beauty salons, and internet cafes.

But the Syrian conflict transformed the area into a battleground between rival forces including al-Qaeda linked fighters and ISIS militants, who overran most of the area in 2015. Estimates put the number of ISIS militants in Yarmouk and adjoining districts between 1,500 and 2,000 fighters.

Inter-rebel fighting and a crippling siege that the government imposed on the camp in 2012 deprived the area of essential supplies, including food and medicine. Many residents were reported to have died because of starvation and malnutrition.

The situation worsened on April 19 when the government launched a new military offensive against the area, after wrapping up operations in the Eastern Ghouta suburbs of Damascus, which were recaptured from rebels last month.

Heavy bombardments targeted ISIS positions in Yarmouk camp and the adjoining districts of Hajar al-Aswad and Qadam, as part of a wider effort to consolidate Syrian president Bashar al-Assad’s control over the Damascus region.

Fighting in the area has killed more than eighty-five pro-government fighters and seventy-four ISIS militants since operations started, according to the UK-based Syrian Observatory for Human Rights.

The Action Group for Palestinians of Syria, a London-based monitoring group, reports that nearly twenty civilians have been killed in attacks so far and 40–60 percent of the camp has been destroyed by the offensive.

“The situation in the Yarmouk camp is 10 times worse than the situation was in East Ghouta when it was coming under attack,” says Abdullah al-Khatib, a 29-year-old media activist from south Damascus. “At least in East Ghouta, civilians had access to rescue workers like Syrian Civil Defense and medical facilities.”

The camp’s last functioning hospital, Palestine Hospital, is now completely unable to operate, according to Chris Gunness, a spokesperson for the United Nations Relief and Works Agency for Palestine Refugees in the Near East, who said last week that people in Yarmouk “are begging for medicine.”

Meanwhile, ISIS militants on Saturday also seized a hospital, referred to as the Japanese Hospital, between Yarmouk and Yalda, further hindering civilian access to medical facilities.

“All those who don’t work with ISIS in the camp, are fated to die,” al-Khatib says. “If shelling hits, they have no place to hide and no hospitals to go to,” he adds, explaining that unlike in Eastern Ghouta, residents do not have access to equipped makeshift bunkers to shield them from government bombardment.

Compounding the situation, no doctors remain in the Yarmouk camp, according to UNRWA’s commissioner-general, Pierre Krahenbuhl.

“There are no doctors and no paramedics. If someone dies, there isn’t even an ambulance that can pick them up,” says Mahmoud al-Shami, a 26-year-old media activist living in Hajar al-Aswad.

Residents are also suffering crippling water and electricity shortages in addition to severe food deprivation, al-Shami said. Krahenbuhl of UNRWA confirmed this in a statement last month, saying that “supplies of food and medicine [are] running low” and “there is no running water and very little electricity.”

Military operations in Yarmouk coincided with a string of rebel evacuations from other rebel-held areas around the capital in recent weeks.

Rebels in the town of Dumayr, northeast of Damascus, agreed to surrender their enclave to government forces on April 19 just as operations in southern Damascus were gaining momentum. Less than one week later, the Syrian government announced that a separate rebel enclave in the eastern Qalamoun region, also northeast of the capital, was cleared of rebel forces.

Earlier on Sunday, rebel groups in the besieged suburbs of Yelda, Babbila and Beit Sahm, east of Yarmouk, also reportedly agreed to surrender their pocket to government forces in return for a safe exit to opposition-held areas in Syria’s north. That same day, hundreds of fighters belonging to the Hay’at Tahrir al-Sham alliance (HTS) also agreed to evacuate the Yarmouk camp as part of a similar arrangement.

For al-Shami, and many other residents who spoke to Syria Deeply, the ideal scenario looking forward would be for the government to strike an evacuation deal with ISIS militants. This would spare civilians in the area further government attacks. However, negotiations between government forces and ISIS militants have so far failed to secure such an agreement.

Rami al-Sayyed, a 35-year-old media activist living on the outskirts of the Yarmouk camp, says he believes this is because some members of ISIS have refused to strike an evacuation deal. Differences over where militants would be evacuated to and what kind of weapons they would be allowed to take with them could have hindered the prospects of an agreement, he says.

It remains largely unclear where the fighters would be transferred to, but the group’s largest groupings, apart from those in southern Damascus, are in eastern Syria near the border with Iraq, where US-led coalition forces and their Kurdish partners are fighting ISIS militants.

US defense secretary Jim Mattis said on April 26 that he expects to see “re-energized” efforts against ISIS in eastern Syria. His comments came at a time when many fighters with the Syrian Democratic Forces were returning to the area from other frontlines to fight ISIS. Mattis also said that French special forces had been dispatched to areas along the Euphrates River in recent weeks in an attempt to boost efforts against the militant group.

Increased operations against ISIS in eastern Syria may deter militants in Yarmouk from seeking a safe exit to areas further east. However, al-Sayyed says he believes ISIS is bound to accept some sort of deal soon. He cites the recent evacuation of HTS fighters from Yarmouk as a sign that ISIS evacuations are relatively imminent.

This article originally appeared on Syria Deeply. You can find the original here. For important news about the war in Syria, you can sign up to the Syria email list.