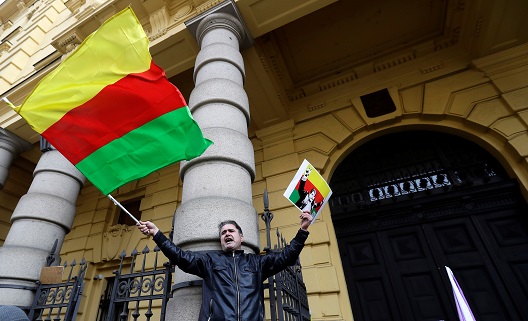 The Democratic Union Party’s (PYD) position is precarious. Though it has made political and territorial gains during the Syrian crisis and tied itself to the United States’ fight against the Islamic State (ISIS, ISIL, Daesh) and subsequent stabilization efforts, the PYD is threatened by remaining pockets of ISIS resistance, the threat of a Syrian government attack, and a Turkish-backed rebel assault on its territory in Afrin.

The PYD’s continued success depends on its ability to remain aligned with the US and establish its administrative system in a way that garners local and international support. US Secretary of State Rex Tillerson said in January that “the United States will maintain a military presence in Syria,” in reference to an estimated 2,000 soldiers concentrated in the quarter of the country the Kurdish party controls. Turkey is unlikely to risk direct confrontation with these troops, and neither is Damascus, which means that pending a major shift in conflict dynamics, the PYD’s territory east of the Euphrates is secure. All indications show the party is planning for a long-term presence, as it has spent years establishing a civil administration in northeast Syria, and has held two rounds of elections in late 2017 to formalize its experiment in self-styled democracy (the elections’ third, and final stage has been postponed for unclear reasons). While it faces many potential pitfalls, the PYD has shown itself flexible, such as by governing differently in its core territories than it does in periphery areas like Deir Ezzor.

Under the political order proposed by the PYD, local communities run their own affairs, and citizens resolve problems through dialogue with neighbors. Men and women of all races enjoy equal rights and responsibilities. Party literature claims that once it has taken root, so-called democratic federalism could spread across Syria and the Middle East and erase scars left by sectarian conflict. On the ground in Syria, the PYD has implemented large parts of its social program focused on gender and racial egalitarianism, while taking only tentative steps towards developing promised political institutions.

Neighborhood councils, called communes, form the building blocks of the democratic federalist model. Residents of northeast Syria elected representatives to more than 3,000 communes late last year, and hundreds have been in operation since 2015. Since that time, the commune system has reduced gender distinctions by requiring women’s involvement in critical leadership roles, and has facilitated the delivery of much-needed humanitarian relief. But communes have given an insignificant measure of local autonomy to residents, and critics say they have actually entrenched the PYD’s power by tying the provision of essential services to political ideology. Time will tell whether the revolutionary councils will fulfill their charter and guide the area towards democracy, or if they will help create a version of the authoritarian state they are supposed to destroy.

“The Syrian conflict is a crisis of governance,” Hakam Khalo, head of the PYD-led autonomous administration’s legal office in Hasakah, told SyriaSource. “It is a crisis based on a dictatorial, authoritarian, chauvinist regime, which is no longer possible with the multiculturalism, variation in religious doctrine, and national identity that Syria contains.”

PYD ideology holds that the nation state system in the Middle East pits ethnic and religious groups against one another in a conflict for power, giving rise to authoritarianism as one group comes to rule at the other’s expense. In Syria’s case, the Baath Party suppressed Kurdish identity for decades, banning Kurdish holidays and restricting language instruction, and favored Alawites, president Bashar al-Assad’s sect, for sensitive security posts. Now the country is suffering through a sectarian war.

The PYD claims to propose the opposite of the centralized nation state system: power is distributed across progressively smaller democratic units, representing provinces, regions, towns, and so forth, all the way down to the neighborhood level, represented by the commune. Theoretically, all ethnicities cooperate within these councils, and higher government powers coordinate between them.

The communes “organize the people far away from the power of the state,” Mohammed Shekho, an official with the PYD’s umbrella organization, TEV-DEM, told SyriaSource. Each neighborhood elects two commune co-presidents, who choose residents to staff committees that are supposed to oversee most matters pertaining to daily life. In a perfectly functioning commune, the economic committee supervises small business creation, the security committee organizes resident-led patrols, and the reconciliation council mediates between feuding neighbors.

Local autonomy might seem like an easy sell to people who have survived a brutal, seven-year war. However, the hundreds of communes active since 2015 have failed to garner popular support because most have fulfilled only their administrative functions like distributing humanitarian aid, and relaying service requests to higher authorities, according to author interviews with two commune residents and two Kurdish journalists. The economic, security, and other committees, which might give communities real decision-making power, have sat idle while the PYD exercises control over municipal government.

“My area’s commune is mostly there for appearance’s sake…the only thing they did was distribute fuel for the winter, bread, and gas,” a Kurdish former teacher, who requested anonymity when discussing politics, told Syriasource from northern Raqqa province. “The real decisions belong to The People’s House [the area’s TEV-DEM office]—the People’s House will use the commune as a cover [for its decisions],” she said.

TEV-DEM retains budgetary control over the communes. The major Syrian Kurdish political bloc in opposition to the PYD boycotted commune elections in September, meaning that most co-presidents are party supporters.

TEV-DEM official Mohammed Shekho acknowledged that the PYD’s efforts to implement local self-rule have experienced “shortcomings,” which he said were natural given wartime conditions. “We’re in a war…all of Syria’s infrastructure was destroyed, and the capabilities that are available aren’t huge,” Shekho said. Over the past three years, PYD-affiliated fighters suffered heavy casualties as they forced ISIS out of the country’s northeast, and now they are busy repelling a Turkish assault on Afrin, an area that had previously been spared the civil war’s destruction.

Obstacles to realizing grassroots autonomy are psychological as well as material, according to the two party officials who spoke to me. Just as the nation-state leads to perennial conflict among ethnic and religious groups, it also subjugates women and excludes them from public life. Therefore, as the thinking goes, residents must adopt enlightened ideas about gender equality before the transition to decentralized democracy can succeed.

The commune system is entrusted with affecting this social change. The co-presidency is made up of one man and one woman, and communes teach residents classes that blend together gender egalitarianism, anti-racism, and democracy, taking inspiration from the teachings of jailed Kurdistan Workers’ Party (PKK) head Abdullah Ocalan. In an armed conflict dominated by men, some of whom harbor socially conservative views on gender, communes often carry the names of women killed fighting ISIS.

The presence of women in the communes “has played a big role in getting society to accept female leaders, and getting women to participate in all [public] activities,” said a Kurdish woman from northern al-Raqqa province, who requested anonymity.

But three Kurdish critics of the commune system reported that backwards conceptions of gender, and material constraints, are not to blame for the communes’ lack of functionality. Rather, they say the PYD intends to use the councils to entrench its rule over a population that does not uniformly support it.

“The goal of these communes is to bind the citizen to a specific political orientation,” said a Syrian Kurdish political analyst based in Turkey, who, like other critics of the commune system interviewed for this story, requested anonymity. “In order to get bread, you need to adhere to this [PYD-led] administration’s policies.”

Communes supervise distribution of humanitarian aid, and give residents permission to apply for essential civil records. As a result, they have tremendous leverage over people struggling to get by in the wartime economy. “If someone wants to open a coffee shop, apply for a driver’s license, a job in the administration, a media license, or anything else you could think of, they need commune approval,” a Kurdish Hasakah-based journalist reported.

“The commune is a surface-level institution that’s used, when needed, to apply pressure on dissidents and opponents of the current administration’s policies,” the journalist added. For example, a commune in Hasakah city refused to approve a youth club’s activities and flagged it as dangerous to higher authorities because most members belonged to parties affiliated with the opposition Kurdish National Council, a second Hasakah-based Kurdish journalist told the author in a private interview.

Communes’ security committees sometimes include PYD loyalists who act as the party’s “eyes in the neighborhoods,” according to the second journalist. They gather information such as: “Who lives in the neighborhood? Anything strange going on? Politically, who do people support?”

For many Syrians, life under the PYD-led administration is preferable to living under the central government, rebels, or ISIS, as people enjoy personal freedoms and relative safety. But some residents fear the party will end up acting like the authoritarian states it claims to dismantle. Top PYD leadership is dominated by military personalities connected to the PKK, which has historically used violence against political opponents. During the Syrian conflict, groups affiliated with the PYD have forcibly shut down the offices of dissident Kurdish parties, threatened opposition journalists, and conscripted residents for military service.

Legal official Hakam Khalo hopes that over time, as residents take to participatory government, the area’s administration will improve. “The democratic structure, whether in Europe or in America, was not a spontaneous thing, the product of days or years. It was an accumulation of culture and knowledge over centuries,” he said.

“We’re at the beginning of the path, and it’s a proper beginning.”

Dan Wilkofsky is a Syria analyst at the Navanti Group LLC, and a former editor at Syria Direct. He’s on Twitter as @Dwilkofsky1.