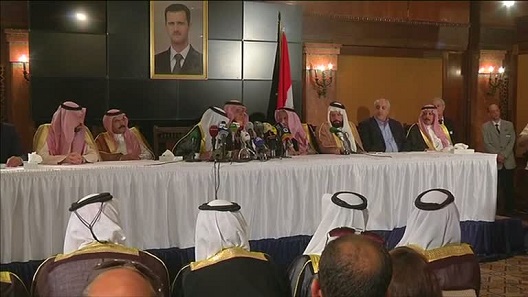 Despite the lack of focus on the Syrian Arab tribes’ social and political roles, they continue to be an important player between the conflicting parties in Syria, especially the Euphrates region and in northern Syria. At times, they have been able to change the balance of the conflict in various areas. During the past eight years, tribes have changed their allegiances by supporting the dominant power who can protect their interests.

Some of the tribes see the Syrian regime as a familiar ally that supported them in the past against the Kurds; whereas other tribes joined groups opposing the regime or those considered extremist. As the war enters a new stage, major players—Turkey, the regime and its allies, and the United States—are now trying to ensure the support of the tribes to stabilize the regions they control. Yet, the tribes, rightfully so, want to guarantee their communities will remain when the dust settles.

What is known as the Supreme Council of Arab Tribes and Clans held its first conference in the city of A’zaz in northern Aleppo countryside on December 21, 2018. More than 100 tribes and clans took part, including Arab, Kurdish, Turkish, Christian, Alawite, and Druze. The conference was held to mitigate the fractured and disorganized meetings with representatives of tribes in Turkey. Forming the Council is intended to create a unified body that can take part in the political negotiations concerning Syria’s future. The participants declared their commitment to goals of the Syrian revolution and rejected the idea of dividing the country.

The conference participants discussed and expressed their support for the Turkish lead operation in Northeastern Syria to reclaim territory from the control of the Syrian Democratic Forces (SDF). Attendees called on Turkey to speed up this military operation so that the lands “can be returned to whom they consider its rightful owners.”

After gaining control of parts of eastern and northern Aleppo countryside after Operation Euphrates Shield, Turkey worked to form several local councils under its authority. It also distributed positions within these councils to families. Positions were distributed according to the number of families in each city and its relative weight; ensuring that the decision is based on the agreement of the families in each city.

Zafir al-Husayn, the manager of the political office of the Tayy tribe in Aleppo countryside, rejects any claims that portray Turkey as the main stakeholder behind this movement. Rather, he stated to SyriaSource that no one forced them to support the battle east of the Euphrates and/or reclaim the area after the US forces withdraw. He says, “If we had bowed to military pressure, we would have been displaced by the Islamic State (ISIS) and the Syrian Democratic Forces [SDF] who came after them. The SDF displaced and swept away a number of Arab villages under the pretext that their residents supported ISIS.”

He added that there is no peace with Assad except by putting him on trial along with those responsible for killing more than a million Syrians and displaced entire Syrian provinces, as he put it. Al-Zafir asserted, “We do not support the Iranian strategy or the Russian one. They continue to try and convince us through their mediators by claiming to guarantee our safety in exchange for the return of the Syrian Army, who bombed us, in exchange for not putting him on trial. Rather, we support a safe zone to which all Syrian refugees can return from the countries to which they have migrated.”

A month before this conference, the ‘Council of Elders and Dignitaries of Syrian Tribes’ was held in Hasakah city on November 10, 2018 to discuss what attendees called the threat that Turkey poses to the region. They condemned the “Turkish occupation” of their territory and its “brazen interference” in their affairs. The SDF organized this meeting under the framework of their efforts to resist Turkey’s attempts to interfere in the areas east of the Euphrates. The participants declared their full support of the SDF, called for finding a solution to the Syrian crisis from within Syria, and affirmed the necessity of resolving the conflicts with the Syrian regime.

Rashid, one of the senior members of al-Wilda tribe who resides in the town of Tabqa in western Raqqa Countryside, says in an interview with Syria Source on WhatsApp: “We have nothing to do with what is known as the Eastern Euphrates Battle—which Turkey wants to launch on our lands. Rather, it is contrary to what Syrians wanted to achieve with their revolution, with which they demanded the fall of the Syrian regime.” He asserted that what this battle aims to do is extend the life of the Syrian regime and drag out the crises that the country is going through, adding that one way or another it will divide the country.

As for his clan’s relationship with the Kurdish Democratic Union Party (PYD), which Turkey considers a terrorist organization and the United States has placed some of its leaders on its terrorist lists, Rashid said:

“Not all areas located east of the Euphrates river are controlled by the People’s Protection Units (YPG, the armed wing of the PYD); the areas where they are present are well known. Likewise, not all of the SDF groups that the United States supports are YPG. The YPG are just one unit among the many that make up the SDF, and we have nothing to do with them. Using us as a bargaining chip for Turkey is an injustice to us as tribes. We do not want to enter a new battle, and we don’t want to lose our sons.”

On the other side of the spectrum, a number of tribal dignitaries gathered in areas controlled by Syrian regime. They urged the Syrian army to assert its sovereignty over the areas east of the Euphrates. This author tried to contact one of the dignitaries of al-Dulaym tribe who occupies a position on the Syrian Government’s People’s Council and who lives in the capital Damascus. However, he refused to conduct the interview.

The Syrian tribes disagree over more than just Turkey and the East Euphrates battle. Their position regarding the US withdrawal from Syria is also split. Some of the tribes support the withdrawal, while others reject it. Al-Husayn says that the US withdrawal decision

“is good and we support it, even if it is long overdue. The United States continues to sponsor and support a group we consider terrorists. The YPG, which is the arm of the Kurdistan Workers Party [PKK] in Syria, aims to separate its territory from Syria and threatens the region’s security.”

Al-Husayn believes that the United States did not fulfill its promises regarding the restabilization efforts, whereas Turkey provided appropriate circumstances in the areas that it controls in Syria for refugees to return. In contrast, other powers have failed on this matter, especially the United States. Al-Husayn said,

“If America and other states want refugees to return to Syria, they should observe the civil management of the Euphrates Shield area and the number of Syrians who have returned to it. They should also look at the regions that the Syrian regime and SDF control and compare how they manage matters and the percentage of returning refugees. Then they should decide what is best for Syrians.”

Al-Husayn concludes by saying that he supports the joint management proposition that the Americans and Turks suggested, seeing it as the best way to preserve the region’s security from any coming war and to allow the Arab tribes to once again cooperate and support one another and not be divided by military borders.

From his perspective, al-Rashid sees that the conflict killed many tribe members, and he rejects the American withdrawal from the region. He urges American forces to stay until a transition period can be brought about in which a Syrian president can be elected under UN observation and the country is united again.

The multiple meetings held by Arab tribes in several regions and their various positions—whether regarding Turkey or the US role—point to a sharp division. This tribal divide mainly goes back to the different political opinions of these tribes and the pressure that they face from the military forces in their regions, as well as the displacement of many clan members in the various regions, given that some supported the revolution.

The tribes in Syria lost the most when it comes to the number of casualties in battles. There are no official statistics, because the number of dead tribesmen includes those killed fighting for and against ISIS, while others have been killed in battles fighting for and against Assad’s forces. The tribes may differ on their political stances and alliances, but what brings them together is the same goal: preserving their existence in their respective regions and staying on their land.