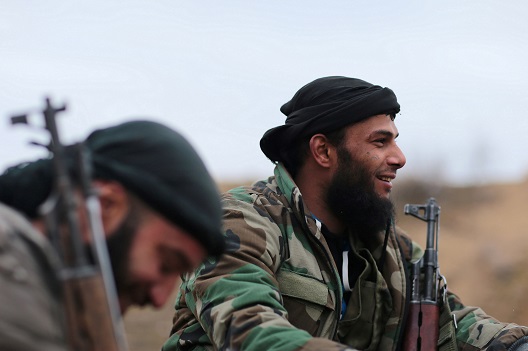 The internal divisions among rebel groups in eastern Aleppo and their infighting during the recent Syrian regime’s offensive led to a poor military performance and helped the latter to recapture the rest of the city. Protests erupted, as a result, in many opposition-held areas, condemning rebels’ mistakes and demanding them to unite. Many rebel fighters and leaders also joined civilians in criticizing the power struggle and divisions among their groups, which amplified the pressure on the latter to unite. The divisions within rebel groups, however, shaped the merger talks and created two competing initiatives. Jabhat Fateh al-Sham, the rebranded former al-Qaeda affiliate Nusra Front, led the first initiative which gives hardliners more authority. Free Syrian Army (FSA) and other pragmatic factions launched what is being referred to as the pragmatists’ initiative to unite groups who are open to working with the West. Lobbying efforts for these competing proposals are ongoing, but they will likely further deepen the divisions between hardliners and pragmatists, within some groups and across them, instead of uniting them.

Talks among rebel groups to form a united front against Bashar al-Assad’s forces began in early 2012, however, power struggles and ideological differences hindered the vast majority of them. Most of these attempts adopted a graduate integration strategy, as was the case with the Islamic Front and the Levant Front. Other smaller rebel bands opted to be absorbed into more powerful groups, such as when Suqur al-Sham members joined Ahrar al-Sham.

While some mergers among rebel groups in the past have been widely welcomed in opposition circles as moves to strengthen rebel unity, any possible unification with Jabhat Fateh al-Sham remains a highly divisive issue. The hardliner wing within different groups has always been in favor of a merger with Fateh al-Sham as a means to strengthen rebel unity. Pragmatists and moderates, within different groups, have refused it because of the heavy price they would pay: losing local and international support and risking being labeled as a terrorist group by international groups.

The fall of Aleppo and the continued decrease of international support channeled to rebel groups recently revived merger talks between Fateh al-Sham and a number of rebel groups. The Fateh al-Sham-led initiative proposed a merger which names its leader as a general military commander and allows him to appoint the political leader. The proposal also names Ahrar al-Sham’s leader as the overall leader, while Harakat Nour al-Din al-Zinki’s current leader would be the leader of the Sharia Council. According to a reordered statement by Suqur al-Sham’s leader, this proposal would have reached a consensus, however, Fateh al-Sham presented it as anultimatum, preventing negotiations with other groups and dooming the initiative to failure. Cooperating with Turkey, and the West in general, was also reported as a divisive issue. Fateh al-Sham reportedly insisted on opposing Turkey’s Euphrates Shield operation inside Syria, but doing so would end rebels’ relations with Turkey—a heavy price many rebels cannot afford.

The parallel FSA-led unity initiative was being circulated at the same time, and its chances of success increased when  Fateh al-Sham’s proposal deadlocked. Rebel groups saw this initiative as a counter-proposal to isolate Fateh al-Sham by only bringing together pragmatic and FSA groups. Although this initiative has not succeeded in uniting these groups, 10 FSA groups (al-Jabha al-Shamiya, Jaish al-Islam (North), Jabhat Ahl al-Sham, Liwa Shuhada al-Islam (Daraya), Liwa al-Furqan, Suqur al-Sham, al-Fawj al-Awal, Faylaq al-Sham, Firqat al-Safawa and Ahrar al-Sharqiya) with a total of 18,000 fighters announced on December 28 the initiation of a number of practical steps in a gradual strategy towards a complete merger. “These groups agreed on a complete merger but they did not announce it as a done project in order to encourage other groups to join as essential members. Many other groups are expected to join soon but the process will take around three months to be completed. During this time the member groups will work together in a unified structure under specialized bodies for different functions such as military, political, Sharia, security, and other united committees,” said Ahmed Hussein, a media activist in rural Aleppo, to the author via Facebook.

The FSA-led initiative, which has more support from opposition backers, seems to have a better chance of success, however, it also comes with ramifications. The number of assassinations targeting rebel leaders who opposed a merger with Fateh al-Sham increased significantly during and after the merger talks, which made the hardliners (in Fateh al-Sham and other groups) the main suspects behind these attacks. “Fateh al-Sham has already threatened to take away the weapons from any group that does not join their merger when it happens. Therefore, it is not a conspiracy to consider the group as the main suspect. Irrespective of who is behind the attack, I suspect the number of assassinations to continue to increase, especially since a merger between FSA groups is considered a threat to all hardliners,” said a fighter with the Jaish al-Mujahideen to the author via WhatsApp on condition of anonymity.

Even if the pragmatists’ initiative is successful among rebel groups, external funders will also have to welcome it. One of the challenges preventing the success of previous unity initiatives has been the inability of external funders to channel their funding streams to a single rebel body, with each preferring to fund separate groups instead. Turkey’s willingness to work directly with Russia, for instance, may put it at odds with some of the rebel groups and thus unwilling to fund them if it upsets the delicate balance it is trying to work out with Russia and the regime.

The fear of large defections of hardliners from groups who plan to join this FSA-led initiative will also likely prevent some of the armed units from joining. Some groups are publicly going through internal existential crises, namely the strong Islamist movement Ahrar al-Sham, which is on the verge of a split. Others, however, will likely continue to avoid such divisive decisions in order to save the unity of their factions, particularly Harakat Nour al-Din al-Zinki.

These merger debates, although they have come late, are important despite the critical condition of the Syrian rebels and the heavy price that they may have to pay. A merger among FSA groups is not only a military necessity but also a political one. Only such a process will allow rebel groups to forge a clear identity and self-evaluate their mistakes. It is also their only option to overcome the internal and external threats facing them. Policymakers should also help these groups to make such a decision easier by providing them with the needed support to do so.