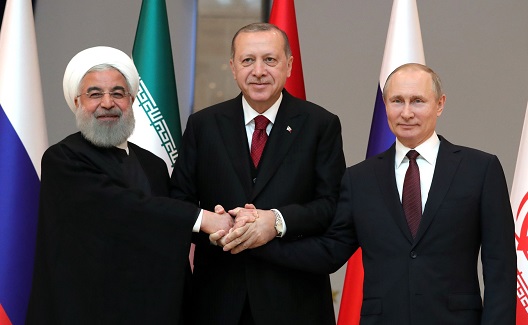 At the end of March 2018, US President Donald Trump froze more than $200 million in pledged funds to restore stability and support reconstruction in Syria as the US administration reassesses its role in a number of protracted conflicts around the world. This measure suggests that US troops may withdraw from Syria in the near future, particularly given Trump’s recent comments on the matter. Many Syrian and US stakeholders objected to those statements, who view Washington’s withdrawal from Syria as an opportunity for Iran to expand its already sizeable influence in the region stretching from Iraq to Syria to Lebanon.

If the United States withdraws from Syria and withholds its support, Kurdish forces in northeastern Syria—the main ally of US forces in Syria—will lean toward the Assad regime. They recently allowed Assad’s national defense militias to enter Afrin in the recent battle against Turkey and the Euphrates Shield factions. This shift would clear a path for Iranian-backed militias to take control of northeastern Syria, opening an avenue to the formation of the “Shia Crescent,” extending from Iran through Iraq to Aleppo and Homs, ending in the port of Latakia on the Mediterranean.

Former US President Barack Obama’s policy was ineffective in managing conflict in the Middle East in general, and Syria in particular, but Trump’s approach relying on short-term plans in the absence of a clear long-term strategy is worse. This policy fundamentally depends on pressuring the countries that influence the Syrian conflict—such as Turkey, Germany, France, and Saudi Arabia—and forcing them to increase their support to stabilize Syria by allowing Iranian expansion into the western Euphrates areas and refusing to restrain the Russian genie; the most influential player in the Syrian arena. The interests of the Syrian people remain ignored, with no forthcoming support to the Free Syrian Army factions or even a foundation for Arab-Kurdish co-existence.

As the struggle against the Islamic State (ISIS, ISIL, or Daesh) in Deir Ezzor intensified, a race to control the oil fields broke out between the United States and its Syrian Democratic Forces (SDF) allies on the one hand and Russian-backed regime militias on the other. Oil remains a trump card in negotiations over a political solution in Syria. SDF forces control about 80 percent of Syria’s oil fields, the last point of leverage that the United States can use to divide Syria’s spoils with other parties, especially Russia. Oil plays a significant role in both reconstruction contracts and Russian President Vladimir Putin’s desire to invest in Syria, the proceeds from which will compensate his country for its substantial military spending. These investments could prompt Russia to set up military bases near oil fields in eastern Syria to protect its companies.

Yet the Islamic State’s presence remains in Syria. The organization did lose large areas of control after its defeat by the SDF, backed by the US-led coalition; but now its areas of influence are limited to the countryside of Deir Ezzor and pockets of the Badia (desert) region. The organization nonetheless presents a serious threat to stability in the region, according to Mohammed Saleh, a spokesman for Raqqa Is Being Slaughtered Silently. “[ISIS] is still an organization capable of launching bloody attacks and possibly re-emerging in a number of areas in Syria if forces stop attacking it or withdraw, despite the significant loss of combat capabilities,” he said.

The risk of ISIS’s resurgence could double if the forces fighting it withdraw from the battle before its end, opening the way for the return of a new and bloodier version of this terrorist organization. Armed oppositions’ preoccupation with other crises have given ISIS time to consolidate its once-defenseless forces and return to fight. The Kurdish referendum on independence in Iraq, for example, is a case in point. The referendum prompted the Iraqi government to withdraw its combat forces against ISIS in an attempt to restore control over Kirkuk and other disputed territories with the Kurds. Last October, the attack by Euphrates Shield forces and the Turkish army on the Kurdish region of Afrin in the northern Syrian region had a negative impact, forcing the SDF—the main component of the Kurdish People’s Protection Forces—to pull some troops away from the fight against ISIS.

ISIS’s return remains possible due to its military experience. Its leaders knew they would lose Mosul and Raqqa in the long term and succeeded in smuggling their caliphate leader, Abu Bakr al-Baghdadi, far from Mosul. The organization likely hid its experienced leaders in safe houses in the deserts of Iraq and Syria where it also hid weapons caches. This tactic previously enabled the group to survive and evolve from the so-called “Mujahideen Shura Council” to the “Islamic State in Iraq” after its defeat in 2007 and 2011. It reappeared when the conditions became appropriate. ISIS today hopes to regain its strength and re-emerge in the same way.

ISIS will not likely return with the same strength due to the heavy blows it suffered from competing forces in Syria and Iraq. Yet the organization can still provoke sectarian strife and hatred in the areas it controls. For example, many Syrians feel skeptical toward the citizens of Raqqa, regarding them as secret members sympathetic to the organization. The same is true in Mosul. The collective punishment policy against Sunni Arabs by the Iraqi Shia militia organization, the Popular Mobilization Forces (PMF), could help ISIS return and provide a base of support among Sunni majority Syrians. Along these lines, ISIS recently carried out suicide bombings in the Hawija area (southwest of Kirkuk province) partly aimed at the PMF but ended up killing twenty-seven people.

The withdrawal of US troops from Syria and ceasing support for the stabilization of areas outside of ISIS control is a precious gift on a platter provided by Trump for Russia, Iran, ISIS, and of course the Assad regime. This comes at a time when the Syrian people and the region need a clear and long-term policy that guarantees a political solution that ends with Assad’s departure and prevents the reemergence of radical organizations at the center of Syria’s raging conflict.

Feras Hanoush is a member of Raqqa is Silently Being Slaughtered, a former field medic in Syria, and previously involved in a program to support the moderate opposition.