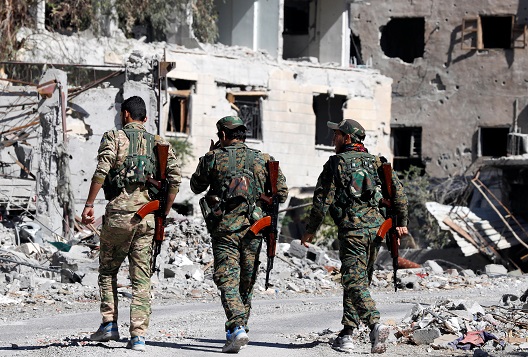 Photo: Fighters of Syrian Democratic Forces walk along a road after Raqqa was liberated from the Islamic State militants, in Raqqa, Syria October 17, 2017. REUTERS/Erik De Castro

The race to Deir Ezzor in eastern Syria is accelerating. Syrian regime and allied forces, supported by Russia, are attempting to seize the strategically vital city by advancing from the north along the Euphrates valley. Meanwhile, the US-backed Syrian Democratic Forces (SDF) are advancing in an effort to take as much of the city as possible in operation code-named Jazeera Storm. The coming days therefore present the possibility of US and Russian-backed forces clashing in Deir Ezzor.

If that happens, it will be the first direct clash between internationally-backed forces in Syria. Russia on September 21 accused US-backed forces of opening fire on Assad regime forces, warning the American military that it would respond to any repeat of the incident. Syrian presidential advisor Buthaina Shaaban also threatened that the regime would fight SDF forces to prevent them from reaching Deir Ezzor. Ahmad Abu Khoula, the head of Deir Ezzor’s SDF-run military council, responded: “Any attack on Jazira Storm forces by regime forces will provoke an immediate response.”

The latest moves by the regime and its allies reflect a convergence of military and political interests. The regime today desperately needs to retake Deir Ezzor province and its natural resources in order to strengthen its image and impose its vision for a solution in Syria. Iran also needs to take control of the area to protect its investment in the Syrian conflict, which aims at creating a land route linking it to the Mediterranean via Iraq and Syria and strengthening its position against America. Russia’s aim in seizing Deir Ezzor is to preserve its top position within the balance of power in Syria and exploit that in negotiations with the United States in the framework of a comprehensive agreement that would protect its interests and its position internationally. The clear strategic vision adopted by the regime and its Russian and Iranian allies helps predictions of what will come next in Syria. Their moves have a military strategy that relies on controlling key assets and setting priorities, unlike that of the SDF, which appears to follow a more random course that involves controlling oil fields without securing any strategic depth around them.

The US administration also has no comprehensive strategy in Syria. It has relied on a vague set of policies based on supporting the SDF and fighting only the Islamic State (ISIS, ISIL, Daesh), without announcing any further plans or its vision for the future of the region once the current battle is over. The White House has dealt with the Syrian, Russian, Iranian, and Lebanese governments as independent, unlinked entities. While it has allied with the government of Haider al-Abadi in Iraq, dominated by Iran-backed Shiite militias, it also works with the SDF in Syria, an enemy of the Iran-backed Syrian regime. At the same time, the US works with the Hariri government in Lebanon, dominated by the Iran-backed Hezbollah. Tehran enjoys freedom of movement across the entire region to carry out its plans and impose its hegemony. This makes it inevitable that the United States will have to change the current battle map to prevent Iran linking up the disparate areas controlled by its proxies, by cutting roads in key border areas, such as the one the United States lost when it cut off support for rebel factions fighting in the al-Tanaf area and shut down a military base there. While these desert outposts are not a priority for the United States as they present no direct threat to its national security, they do have direct implications for that of Iran and for Tehran’s attempts to link up its Shia Crescent by controlling the road between Iraq’s Anbar province and the Syrian desert.

As for Moscow, it has largely praised the role of the SDF, which it does not see as an enemy force. Russian observers have also played a role in Kurdish areas such as Afrin, by having a presence there and protecting them from Turkish bombing. These forces have sought to advance along the Euphrates valley towards the Iraqi border, which could bring them into a direct conflict with Iran-backed Shia militias present on the other side of the border. The SDF is also restricted in the north by Turkey, a traditional enemy of the Kurds, which raises an important question: what is the future of the SDF, and will it become a Russian proxy once the battle against ISIS is over? Or will it see Russia as a partner with its enemies on the ground? That would clearly affect the force’s relations with its international partners in the Middle East.

Given the current web of overlapping interests and the fact that each side has overstepped the red lines of the others, the US must present a clear plan and strategy to protect areas seized from ISIS and to ease the lives of their residents. It must also lay out a broad outline for any future negotiations on the regional level.