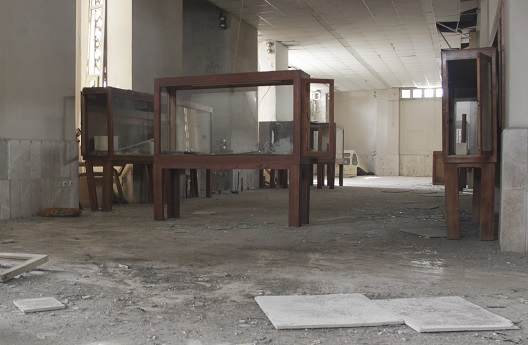 Volunteer teams are desperately attempting to preserve what remains of the archaeological heritage of Idlib, a city in north-western Syria. Most of these efforts have been unsuccessful because most of the city is under the control of jihadists. Any area with archaeological artifacts is at risk of looting by jihadist organizations known to operate in Idlib, such as Hay’at Tahrir al-Sham (HTS). A member from a local volunteer confirmed that they had only been able to preserve a few small objects that HTS had overlooked; unlike the grand statues and old paintings. Some HTS fighters work day and night in special workshops excavating the ancient quarters of Idlib in search of valuables.

A case in point is the village of al-Bara in the Jabal al-Zawiya part of Idlib, which is being dug up and ransacked for archaeological artifacts. The area contains a 4 x 3 km enclosure that is home to artifacts from the successive ancient civilizations that inhabited the area. The majority of the graveyards and churches in the area have been largely destroyed due to the excavations. Activists from the area confirmed that excavation work is ongoing, and reported that there are tunnels built by HTS. The flag of HTS flies over the tunnels so that no one from the volunteer teams trying to preserve what is left of the city’s heritage dares to stand in their way.

The Christian village of al-Qaniya in Idlib’s western countryside has seen large-scale looting targeting the churches and monastery surrounding it. The village is now controlled by Islamist extremists affiliated with al-Qaeda who dug up and destroyed the buildings in search of gold. Syria’s eastern orthodox Christians lived in village but left the area when the Islamic State (ISIS, ISIL, Daesh) arrived in 2014 and did not return after ISIS left the following year. This allowed Jabhat al-Nusra to subsequently take complete control of the village. At present, no one is able to enter a church building. Mass ceremonies are banned, and the courthouse in the city of Darkush forbids Christians from returning the village after HTS took control of the area (HTS leadership is made up of what used to be known as Jabhat al-Nusra).

As for the large smuggling networks established by HTS, were active until very recently in transporting artifacts and gold to Turkey. From there, these networks oversaw the illegal sale of these objects to other countries, with gangs overseeing the transportation of these goods to those countries. Some studies have shed light on the relationship between these smuggling networks and other international criminal gangs.

According to one treasure hunter who goes by the name of Hakim, a Syrian who specializes in looking for gold antiquities, the antiquities trade is a big and lucrative one and requires little complicated equipment. In a phone interview he described how ISIS, Jund al-Aqsa, and HTS all adhere to a fatwa which permits the sale of antiquities and gold items without hesitation. Hakim confirmed that the legal officials of these organizations consider items which glorify historical figures as equivalent to idols, and that there is nothing which prevents them from being used to materially benefit Islamic sharia. He added that jihadist groups from North Africa specialize in looking and digging for artifacts using the same equipment used to search for mines. These groups make small changes to these devices so that they are more sensitive to the precious metals hidden deep in the earth.

Early last year many groups ramped up their search for archaeological artifacts as a result of a break in the fighting for a short period after the so-called “De-escalation Agreement” was reached. The town of Sarmada, which is adjacent to the city of Bab al-Hawa, a main border gateway to Turkey in western Syria, was transformed into the main marketplace for artifacts, weapons, and other items. There are special chat-rooms started by smugglers from the area on the app Telegram where they display their stolen paintings, precious ancient artifacts, and statues. Turkish merchants are active on these threads where deals are struck before the items are illegally transported to the Turkish side of the border. The trade in these objects has seen a noticeable downturn of late after the Turkish army secured its control over all border crossing points following the completion of the border wall which prevents these artifacts being taken to neighboring countries. Despite this, these networks have built up a store of valuable artifacts and are still awaiting the opportunity to take them to Turkey.

While Idlib may not have any crude oil beneath its soil, its population stress that the city does house dozens of sites and places which bear witness to the different civilizations which lived in the area, such as the kingdom of Ebla. The city contains four hundred archaeological sites, making it the burial place of huge quantities of gold. The whole province of Idlib is rich in archaeological artifacts, some of whose history dates back to the fourth millennium BC, and the site of al-Lataminah whose history goes back to the Stone Age lies to its south. Beginning in the fourth millennium BC, the area saw waves of migration of Chaldeans and Aramaeans that established a number of villages with the word ‘kafr’ in their name, including Kafr Lata, Kafr Zayna, Kafr Keyla, and Kafr Takharim amongst others. Other villages’ names begin with the word “Ma’ar,” such as Ma’aratu, Ma’ar Zaf, Ma’ar Tah and others. Idlib province is home to a great number of historical and archaeological sites, and the area has a rich architectural history. Invading forces passed through the area across the ages. One of the most famous archaeological sites there is the historic city of Ebla, located at Tal Mardikh near Saraqib. This city was home to the oldest kingdom to flourish in Syria which existed between 2400 and 2250 BC.

A French jihadist recently found a collection of coins over two thousand years old, as well as a golden statue weighing five kilograms. He posted these items in a group on Telegram and awaited a suitable offer for his finds. He said on the group that he was looking for around one hundred thousand dollars in return for the twenty coins and the statue. The jihadi thought that his find was his rightful property, and that he obtained it as a reward for his efforts, claiming that he will pay HTS five percent of the value of the deal he was hoping to reach, thereby ensuring that the rest of the money obtained from any deal is halal according to the teachings of the legal scholars in the same Telegram group.

Jihadists have intentionally destroyed many of the large stone columns in Idlib which they consider to be relics from non-Islamic civilizations, meaning they can deal with them however they see fit. The area around Jabal al-Zawiya contains dozens of large stone columns which have been destroyed and vandalized. There is no authority capable of stopping this destruction, and preserving artifacts in locations known to the militants after they have been unearthed only makes them more likely to be stolen than if they were still underground. For example, in 2015 the Jund al-Aqsa group broke into Idlib Central Museum and seized all of the artifacts in the museum. The following year they smuggled a large amount of these items into areas in Iraq under ISIS control where the process of selling them at higher prices is easier. There is less security on the Iraqi side of the border than on the Turkish side; making it easier for merchants to enter areas controlled by ISIS and strike this type of deal.

Image: Photo: Empty display stands are pictured inside Idlib museum in Idlib city, after Islamist rebel fighters took control of the area April 1, 2015. Islamist groups including al Qaeda's Nusra Front have seized the city of Idlib for the first time in Syria's civil war, fighters and a monitoring group said on Saturday. Idlib museum was emptied last year by the Syrian government who transported all the archeological artifacts to safe storages. REUTERS/Mohamad Bayoush