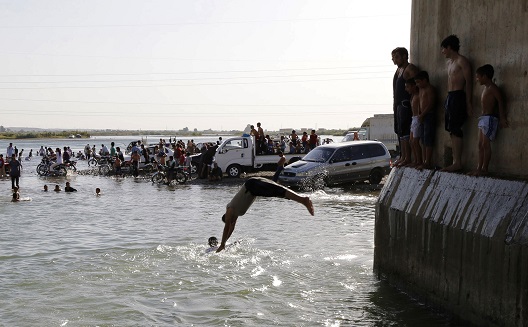 The condition of the Euphrates Dam has deteriorated throughout the Syrian conflict, putting the region at risk of environmental disaster. The greatest threats are international coalition airstrikes against Islamic State positions, and neglect for dam maintenance.

When Syrian opposition forces entered the power station building at 10:30 pm on February 10, 2013, they expressed their willingness to cooperate with the power station administration. They declared that they would not interfere with the workings of the dam, and would provide the assistance necessary to ensure the functioning of the hydroelectric station. Although they did not fully uphold their commitment, the power station and its engineers and technicians have maintained a fair amount of autonomy. The power station staff also stayed in contact with the Ministry of Water Resources and the coordination center in Damascus that distributes the energy generated. The regime continued to pay employees’ salaries and allocate parts of the budget to expenses such as maintenance services and procurement. Regime forces stationed in the Tabqa Military Airport have agreed not to target the power station or associated buildings, which are located about 80 kilometers away. Despite this general commitment, the power station has been struck by artillery shells, and more than one long-range missile has landed in the dam’s reservoir, just a few meters from the power station and the dam itself.

In coordination with the forces in Tabqa airport, the power station has done what it can to repair the high voltage power lines that carry electricity from the distribution point to other Syrian governorates. These lines play a large role in power stations’ ability to allow appropriate amounts of water out of the reservoir and control water levels.

In late 2013, shortly after the Islamic State (ISIS, ISIL, or Daesh) took control of Raqqa in September of that year, it entered the city of Tabqa and seized control of the Euphrates Dam.

ISIS let a contingent of the Euphrates Dam power station’s engineers and technicians continue their work since the terrorist group did not have the expertise to manage it. They did not pay these employees’ salaries, however, aside from those the very few who pledged their allegiance to ISIS. The dam’s employees continued to work and receive their salaries from the Syrian regime. The continuous psychological pressure and livelihood difficulties from the war and ISIS’ rule forced critical engineers to flee, leaving the dam in a critical technical situation.

Most power transmission lines that distribute energy to other governorates in Syria have been damaged, and the station’s power generation has dropped to its lowest levels in its history. Even so, they are still able to maintain a balance in water flowing into the reservoir from Turkey, and the amount passing through the power station, in order to keep the water level at a safe level.

The station has been headed towards disaster over these past years of neglect, complete loss of replacement parts, and the exodus of technical experience. The risk of fighting around the station when the Kurdish-dominated Syrian Democratic Forces (SDF) makes the danger imminent.

The Euphrates Dam power station protects the dam from collapsing by controlling the water flow from the reservoir and through the turbine generators and the eight spillway gates on the station’s roof.

The portion of the Euphrates flowing from Turkey is 700 cubic meters per second. Since ISIS took control of the dams, this amount reached unprecedented lows. The Euphrates Dam reservoir is about 90 km (60 miles) long, stretching from the city of Tabqa to the Tishrin Dam on the outskirts of Manbij, and an average of 8 km wide. The dam itself is 4 km long and 60 m (197 ft) high, with a width of 512 m (1680 ft) at the base and 20 m (66 ft) on the surface, and is composed of sand and gravel rubble. The dam holds 14.1 billion cubic meters of drinking water as well as a huge wealth of fish, and its reservoir provides irrigation for vast areas of agricultural projects on its banks.

There is currently heavy fighting ongoing between the SDF and the Islamic State in the area around the dam. Coalition airstrikes are targeting the Islamic state in the city of Tabqa, near the power station. Tremors from explosions reach the station’s foundations, and are affecting the dam and weakening its integrity.

If the dam or power station is directly targeted, whether intentionally or accidentally, the structure could quickly collapse. ISIS is using the dam and the power station as a base and prison, aware that neither the SDF nor the international coalition will directly target it. ISIS also has the potential to blow it up, or plant explosive devices within the station or dam.

ISIS’ decision to partially open three of the dam’s spillway gates, cause the water level behind the dam to rise, and flood huge areas of agricultural land, is a military strategy to create a natural barrier that would prevent attacking forces from advancing and surrounding the city. The only option the Syrian Democratic Forces are left with is crossing over the dam itself, which is only 20 meters wide, completely exposed, and secured by weaponry. If the dam becomes a battlefield, this could pose an even greater problem, since any aerial assault would damage it, and could even damage the retaining wall on the side of the reservoir, which would allow water to erode the sandy rubble. This process would accelerate rapidly, creating caves behind the dam’s structural reinforcement on the reservoir side, making it unable to hold back the weight and pressure of the water. If this happens, the collapse of the dam would be inevitable.

It would be preferable for SDF forces to attack the city from the west, since their chance of entering it would be less dangerous to the bridge. They appear to have no choice, however, since the battlefront on the west is too wide.

If the bridge collapses in less than ten minutes, it would unleash a rush of water to the Baath Dam, which is 25 km away. The flood of water would join the 90 million cubic meters of water in the Baath Dam’s reservoir, and create a disaster headed for Raqqa at speeds that could reach 120 km / hour.  At this rate, the water would reach Raqqa in less than half an hour, drowning the city. In two hours, it would reach Deir Ezzor, and from there al-Bukamal in Iraq.

The collapse of the dam would not only eliminate all forms of life in the area and change the natural landscape, but would also affect oil wells in Deir Ezzor. Water could mix with crude oil, creating an additional natural disaster. If the Euphrates Dam collapses, it would also affect the areas upstream of the dam, causing droughts and reducing the agricultural output.

The SDF captured the Tishrin Dam from ISIS on December 26, 2015 and prevented lasting harm from coming to the Dam. They will need similarly delicate planning to capture the Euphrates Dam.

Abdel Jawad Sakran graduated from Aleppo University in 1987 with a degree in mechanical engineering and specialization in design and production, and began working in the Public Agency for the Euphrates Dam, servicing the Euphrates and Baath power stations. In 1993 he started as a junior engineer in the Mechanics Bureau, and later became a manager in the turbines department and aid to the Bureau chief. In 2008, he was promoted to Bureau chief, and in 2011 to aid to the station director. In 2013 he was charged with managing the Euphrates Dam power station. Later in 2013 he left to Turkey.