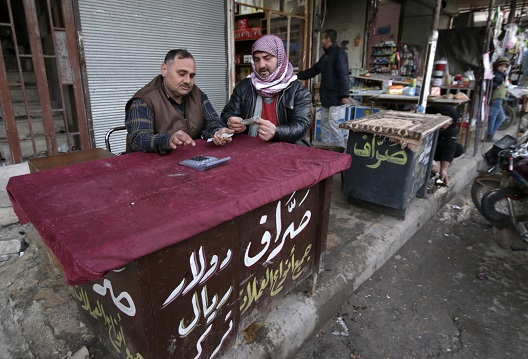 The US-led anti-ISIS campaign has largely succeeded in conquering the group militarily, which has made it difficult for the Islamic State (ISIS, ISIL, Daesh) to operate as a conventional state. As a result of losing most of its urban centers in both Syria and Iraq, the ISIS governance model of controlling and administering territories seems to also collapse. Experts, consequently, seem to be focusing on how ISIS is changing its military tactics to guerrilla warfare or hit-and-run tactics as it goes underground again. But not much attention is being paid to how ISIS’s economic practices are evolving to adapt to the group’s significant financial losses.

ISIS has been described as the world’s “richest” terrorist organization, due to its ability to generate more revenues than any other terrorist group. Reports indicate that group’s main income resources rely on oil sales, internal taxation, extortion, war spoils, the sale of antiquities, human trafficking, ransoms from kidnapping, and foreign donations. IHS, an analysis and consultancy firm, assessed in December 2015 that ISIL’s monthly revenue stood at around eighty million dollars. Of this eighty million, IHS estimated that around fifty percent had come from taxes, and around forty-three percent had come from oil revenue. ISIS also generates revenue from confiscating assets from areas under its control either because people are perceived to be enemies of the Caliphate or simply because they do not live there anymore.

The dependence on state-like tactics significantly shaped the initial economic war against the group. The group’s financial practices were largely focused on generating money from the territories they controlled as indicated in the IHS report. The group, therefore, was more vulnerable to the US-led military operations to counter ISIS’s finances. Since October 2014, US warplanes have stepped-up attacks on ISIS controlled oil infrastructure, refineries, and oil pumps in Syria. Airstrikes also destroyed the group’s bulk cash storage facilities, which contributed to limiting its financial capacity. Additionally, the US eliminated some of the group’s high-ranking financial planners and operatives such as Haji Imam, the finance minister. Nonetheless, the US main economic warfare tactic remains to re-capturing the territory held by the group in order to completely stop it from exploiting the populations and economies under its control.

But territorial losses does not only jeopardize the group’s financial resources, it also provides new opportunities and relives the group from its main state-like financial responsibilities. ISIS may have been able to generate more revenue than any other terrorist organization, but it also incurs costs that are unprecedented for such groups. ISIS’s ambition to sustain the apparatus of a state, over a large area and at a time of war, is expensive. The group, as a result of both its substantial financial responsibilities and the war against it, was facing a constant, and increasingly desperate, struggle to raise money. Therefore, the loss of administrative territory allows the group to evolve its financial practices to ensure its survival and ability to come back.

According to Renad Mansour and Hisham al-Hashumi, Iraq experts, ISIS is adopting a new tactic which is based on creating legitimate businesses (such as services companies, properties, food, and beverage industries etc.) via profit-driven third parties. ISIS hascash reserves but cannot invest it directly due to the counterterrorism laws, as well-known ISIS members will always be monitored which limits their ability to maneuver. But the group can overcome this problem by paying a third party to purchase various businesses in order to maintain liquidity and relevance in the war economy. “The new approach centers on its ability to launder its massive cash reserves, plundered from major cities such as Mosul, in a manner that will allow it to continue to draw upon them without intervention from hostile powers.” The middlemen are usually of mixed sects and backgrounds who mostly only share economic interests with the group and might not even know about the money source. “We highly suspect that ISIS is using the same tactic in Syria, but not much is done to study it. The priority for everyone remains to defeat the group militarily,” said a senior Western diplomat under the Chatham House rule, which prevents me from revealing his identity or affiliation.

ISIS is also dependent on alternative value transfer systems commonly known as the Hawala, which is an unofficial method of transferring money without necessarily moving cash, based on a relationship of trust between different money traders in different locations. Hawala networks ability to avoid electronic transfer methods, make it difficult to track and disrupt. But it is important to highlight that this system in not only used by ISIS, as many legitimate businessmen are also part of this system. “The only way to receive and send money in all areas outside the regime’s control is through Hawala. Many people in regime-held areas also use it. We do not know who is in charge, but we know that it is the only option we have,” said Mustafa Abdullah, a Syrian activist in northern Syria. Likewise, the group seems to also be investing more in other types of fluid businesses like currency exchange shops. “There is reliable evidence that ISIS involvement in the black economy, such as currency exchange, is significantly growing, which allows it to convert its Syrian currency to Western currencies and transfer it outside the country,” added the senior Western diplomat.

Central to sustaining the US-led anti-ISIS achievements is disturbing the group’s financial networks, which aims to ensure its survival while waiting for another opportunity to re-emerge. Therefore, understanding ISIS’s evolving financial practices in both formal and informal economies should become a priority.

Haid Haid is a nonresident fellow of the Rafik Hariri Center, Syrian columnist, researcher, and Chatham House Associate Fellow who focuses on security policy, conflict studies, and Kurdish and Islamist movements. Follow him on Twitter at @HaidHaid22.

Image: Photo: A money changer holds U.S dollars as he sits at his stall in Maaret al-Naaman town in Idlib province February 2, 2015. Many money changers opened recently in rebel-controlled areas where it has become one of the most prevalent businesses. The crisis has brought the dollar into much wider circulation as people try to protect themselves against currency depreciation and inflation. Picture taken February 2, 2015. REUTERS/Khalil Ashawi